As the excitement justifiably mounts for the upcoming new episodes of Mystery Science Theater 3000, let us not forget the classic MST3K that kept us warm and fed for many years, making us feel safe in its soft blanket of loving mockery. We were raised by ten seasons of cable comedy genius, and there’s still plenty more classics to enjoy! Case in point: Teenage Cave Man, Being From Another Planet, 12 To The Moon and Deathstalker and the Warriors from Hell, the four never-before-released episodes in Mystery Science Theater 3000: Volume XXXV.

On March 29th, 2016, join Joel, Mike and their robot compadres Tom Servo and Crow as they serve up old-school comfort food in this delirious celebration of cinema’s cracks and seams. The box set also contains the brand-new bonus features I Was a Teenage Cave Man featurette, the new interview Richard Band Remembers, the original version of Time Walker, the featurette You Are There: Launching “12 To The Moon,” Medieval Boogaloo: The Legend of “Deathstalker III,” and four exclusive mini-posters by artist Steve Vance. Fans can pre-order their copies now by visiting ShoutFactory.com

In Teenage Cave Man, the Man from U.N.C.L.E. plays the Teenager from S.T.O.N.E. A.G.E in this Roger Corman parable of a prehistoric — or at least prehistoric thinking — society and the young man who rebels against the establishment. The episode also includes the short films Aquatic Wizards and Catching Trouble. Being From Another Planet (aka Time Walker) brings us the story of an alien running murderously amok on a college campus after being released from King Tut’s tomb; 12 To The Moon not only includes a feature about an international collection of astronauts reaches the moon, only to discover a race of underground dwellers who seek peace by threatening violence, but also the short film Design For Dreaming; and Deathstalker and the Warriors from Hell, the third installment of Roger Corman’s Lord of the Rings-ish fantasy about a warrior, an evil wizard and the jewel that seems to make a difference. 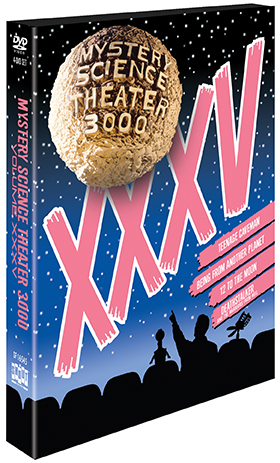