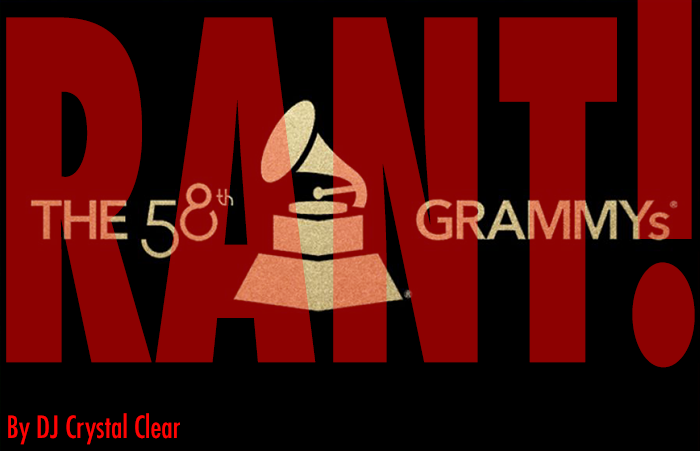 I had a show during this broadcast, so I asked my wonderful friend Claire to DVR it for me. And because of that, I’ll be skipping the red carpet shenanigans and get right to the show. I’ve heard it’s over 3 hours long. Ugh.

Taylor Swift opens the show with “Out Of The Woods”. 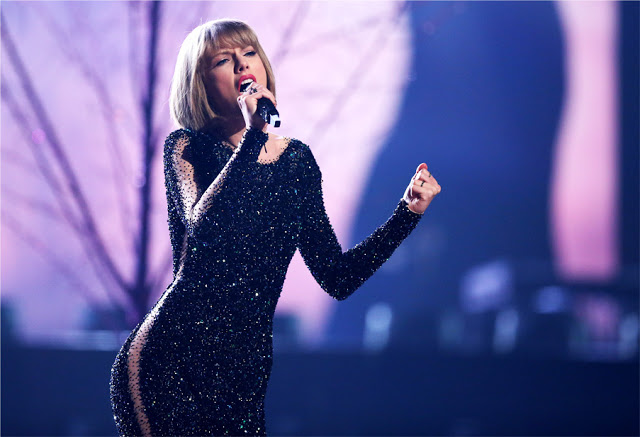 She’s wearing a cool, navy and black sequined catsuit with open side panels, but that wig is not good. Yawn. 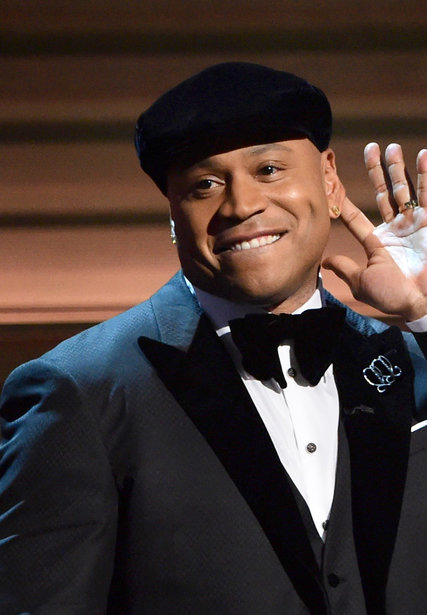 He’s rocking the same tux he’s always wearing for this gig, navy with velvet lapels. He goes on to plug “Lip Sync Battle” and says that these people in the front row REALLY SING, then they show clips of last years performances. Why?

It’s been less than 10 minutes and I’m bored already!

I miss Puffy. Remember when he would bring so much energy and spectacle to the MTV Music Awards?

They need him to host this show.

Anyway, LL totally blows it when he introduces Ice Cube and his son…he called him OJ Jackson Junior, instead of OSHAY Jackson Junior – LAWD. Anyway, they’re here to give the award for

KENDRICK LAMAR FOR “To Pimp A Butterfly” – I’m not into it. Why are they showing Taylor Swift and Robin Thicke during his speech? 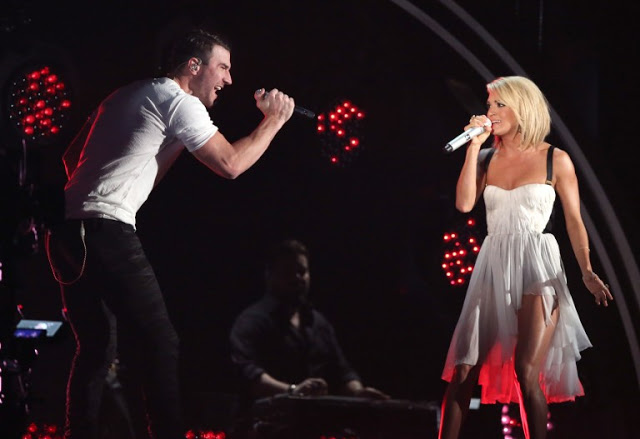 Is this a Country song? No, it’s a Pop song – oh wait, the lyric said something about dancing around in bare feet…does that qualify it as a country song?

Wait, he spells it wrong – Weeknnd. Wknd. FridaySaturdsySunday? ANYWAY, he’s doing a Michael Jackson thing, dancing and singing inside of a LIT UP cube thing, his big hit “I Can’t Feel My Face.” Cute. Then he walks over to a piano and cello and sings another song that isn’t very interesting.

Gfttrgttttttrttthîîi – that’s my friend Claire’s cat, he just walked on my iPad.

Anyway, she introduced two women, one Black, one White. They both wore opposite colored outfits…GET IT? So boring I blanked out on their names. YAWN

And now, a salute to the Music Cares Person Of The Year, Lionel Richie! 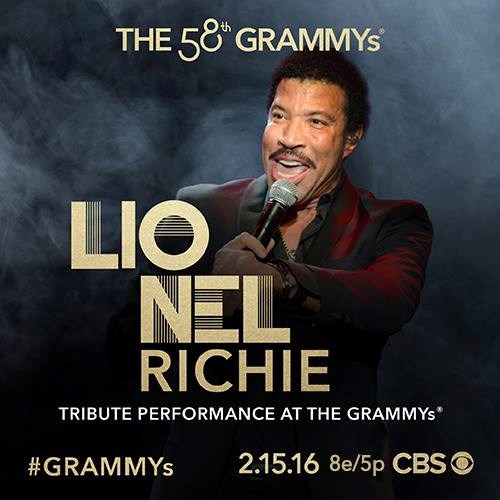 Demi Lovato singing “Hello”. Girl, put on a damn bra. She crushed it though!

Megan Trainor singing “You Are The Sun” 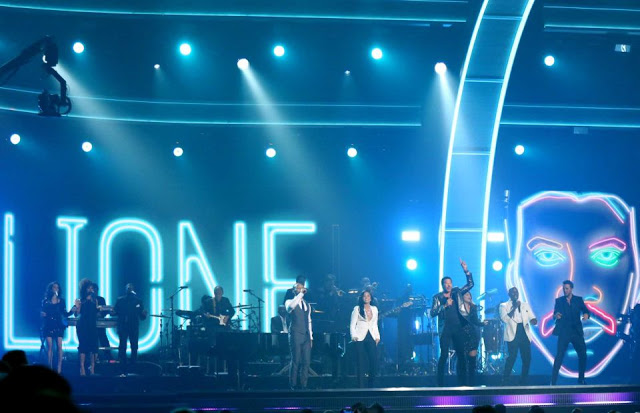 I’m really surprised he didn’t shout “OUTRAGEOUS!” Oh wait, that was when he hosted The Dick Clark Awards.

Why is Ryan Seacrest here? He’s an honorary what…chairman? FUCKERY

Anyway, he introduced the Country band Little Big Town. They’re singing their hit, “Girl Crush” – but with strings, and it’s being played like a Minuet. YAWN

The lyrics are kind of interesting though, it’s a woman who has a girl crush on some guys girlfriend because she’s jealous of her…or something. It was still very boring.

I’ll look it up on YouTube for the original arrangement.

STEVIE WONDER! And he’s with that A Capella group, Pentatonix. They’re doing a tribute to Maurice White, singing “That’s The Way Of The World” and they sound amazing! Stevie CRUSHED IT, HIS VOICE HAS NOT CHANGED ONE BIT!

SONG OF THE YEAR – Announced by Stevie, making fun of the crowd because the card was written in braille, hahahahaha! Then says that everyone with disabilities should have access to everything. THE WINNER, ED SHEERAN AND AMY WEDGE for “Thinking Out Loud”

Why is Taylor Swift so verklempt?

Anyway, Ed gives his speech, then hands the mic over to Amy, she says one word, THEN GLEN FREY APPEARS BEHIND THEM, as big as the moon – a little video clip, then The Eagles start playing, with Jackson Browne…he’s going up on the lyrics, the sound is terrible, and his face is looking very leathery. Why are his eyebrows so dark?

Annnnd we’re back. A guy and girl, Hipster looking, both singing and playing acoustic guitars. YAWN

LL is back, and cuts to here in NYC on Broadway to introduce “Hamilton”! It is a truly amazing show!

He did a very interesting performance piece that started out with him and a bunch of other Black guys chained together in a jail. Then he moved to another stage with “African dancers,” a huge bonfire, then close ups on his face while he’s spitting all over the place, and epileptic seizure inducing lighting effects are spazzing out – this should have come with a warning!

He got a standing ovation, but most of the White people looked VERY confused.

Here’s Miguel, singing Michael Jackson’s “She’s Out Of My Life” and introduces Greg Phillengaines. Why?

Bruno Mars introduces Adele. Here she is again with the “Mother Of a The Bride Chic” gown. HEY ADELE, HELEN MIRREN CALLED…SHE WANTS HER DRESS BACK!

HUGE sound problems going on here, WHAT THE FUCK IS WRONG WITH THE PRODUCERS OF THIS SHOW? WHY IS THE SOUND ALWAYS SO FUCKING HORRIBLE?

IT IS THE GRAMMY AWARDS YOU IDIOTS!

Seriously, it’s as if you don’t know what to do with yourself anymore. 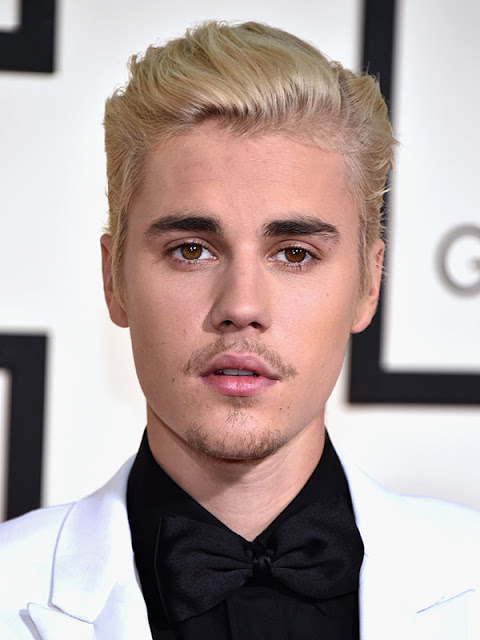 You were the teen heartthrob, then a teen bad boy, you had hot girlfriends, you were photographed naked “by accident” while on vacation by the paparazzi, you’re always on your twin, Ellen’s show apologizing every other week, and here you are, jumping around while singing one of your shitty songs while Skrillex plays guitar, and the Imagine Dragons bang on huge drums, you won your first Grammy, but enough already! Move to the Sudan and volunteer to build schools or something. Donate some of your money to God’s Love We Deliver and drive for them. Something.

Meghan Trainor, she cried through her speech, awwwww…

Intel computer people, you did a GREAT job with the SPFX on her face was cool.

The random guy in black dancing around?

HORRID. THAT WAS HORRID. Why was that HOTTT messss all about YOU and not David?

HEY, it’s Bonnie Raitt! I LOVE YOU FOR AGING NORMALLY!

And she KILLS IT during a tribute to B.B. King, along with Gary Clark Jr. and some big, long-haired, raggedy bearded dude who win. Grammy already. He can play his ass off, but he looks like he stinks.

And now…ALABAMA SHAKES! Brit is serving Mahalia Jackson in that all white schmatta and cape – LOVE HER! But girl, you need to hire a new Drag Queen to beat your face.

Here’s Dave Grohl (he looks tired) introducing the Hollywood Vampires…Johnny Depp, Alice Cooper, and Joe Perry, along with Duff and Matt from Guns N Roses. Plus an extra guitar player, this tribute to Lemmy sounds like shit, and Johnny Depp got fat. 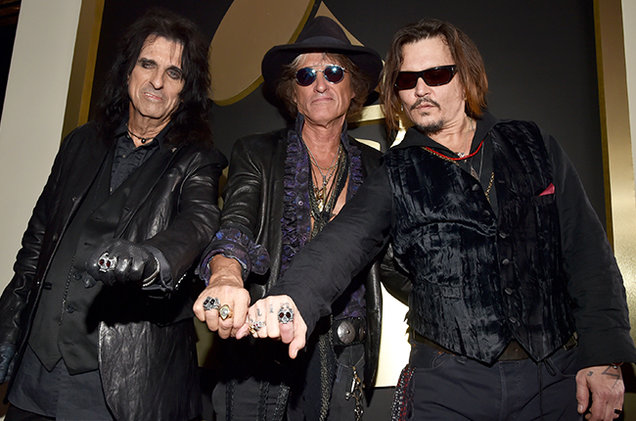 Why does it take 4 guitar players and s bass player to play s song that a trio did? Wow this is horrific. YAWN AGAIN

Now, here’s Neil, the Chairman/CEO of the RIAA and Common to talk about stuff/Music Cares. They introduce 12 year old Joey Alexander, the 12 year old Asian Jazz piano whiz. He won a Grammy. And the kid can play, I saw a story on 60 Minutes where Winton Marsalis introduced him.

And now, ALBUM OF THE YEAR – 1989 Taylor Swift…what the hell is she wearing, pink satin panties and matching skirt with an orange tube top. OY 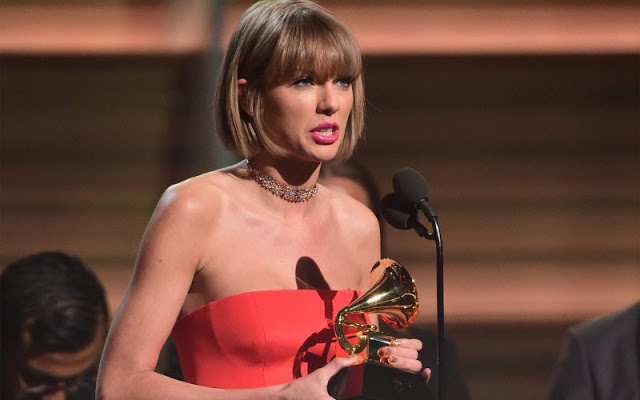 And here’s Beyoncé. She’s wearing a lace tablecloth for a dress. She’s announcing RECORD OF THE YEAR – WALK THE DINOSAUR, UPTOWN FUNK.

Something odd just happened, Bruno Mars shouted, “COME ON BEYONCÉ LET’S DO THIS!” right before she announced the winner. Did he already know that he was gonna win? 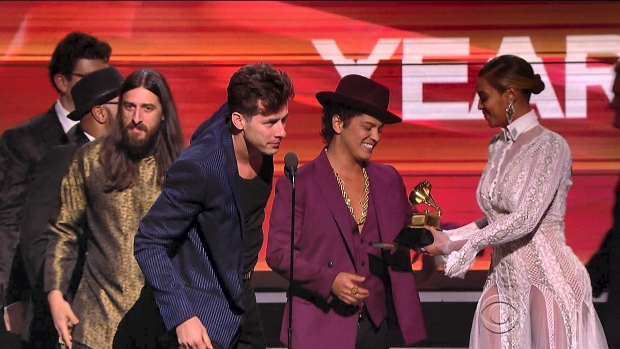 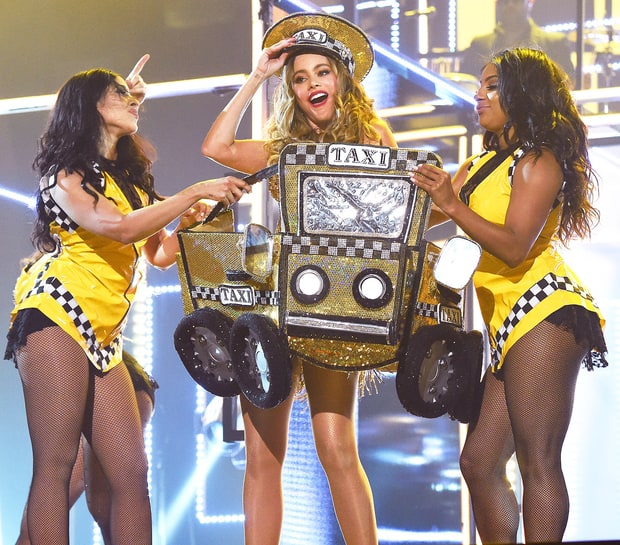 Well, thanks to my dear friend Claire and her DVR, that THREE AND A HALF HOUR SHIT SHOW only took me THREE HOURS to watch, even after fast forwarding through commercials and boring parts of the show .

It was one of the worst Grammy shows I have ever seen. Just wretched. 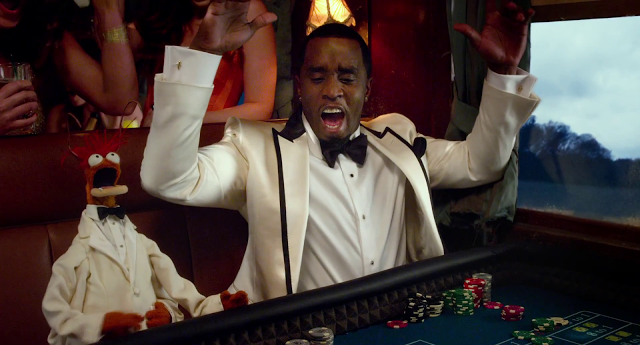 Okay, see ‘ya at the Oscars!