The Path of Justice reviews the final Batman v Superman trailer, along with a look back at the film’s legendary source material, Frank Miller’s graphic novel, The Dark Knight Returns.

The final trailer Batman v Superman: Dawn of Justice dropped yesterday, and it’s perfect in every way! Not only does it show that the marketing is now clearly on the fight we’re paying to see, it also primarily focuses on Batman. Sounds kind of unfair considering he shares the marquee with Superman. Nope, and I’ll tell you why.

We’ve already seen what Superman brings to the table as a character in Man of Steel. This trailer gave us our first real peak at what kind of Batman we can expect. He was the supreme fighting machine in every way imaginable, and it was awesome!

Batman blocking Superman’s punch is the money shot of the trailer. The look of disbelief on Henry Cavill’s face absolutely sells this moment to the highest magnitude. It tells us that %$#@ is about to go down and that March 25th can’t get here fast enough!

A Look Back at Batman: The Dark Knight Returns 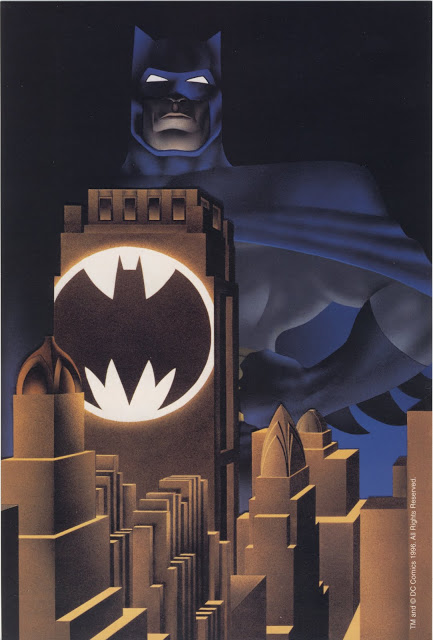 This month marks the 30-year anniversary of Frank Miller’s seminal tale (with collaborators Klaus Janson and Lynn Varley), Batman: The Dark Knight Returns. It’s not just a great graphic novel, but a story that molded one of, if not the most iconic superhero of all-time while transcending pop culture in the process. In a genre of storytelling that never ends, Miller’s darker and more mature edge was unlike anything many had seen before.

Director Zack Snyder stated that Batman v Superman is inspired in part by TDKR. The similarities between the two are evident in the various trailers that have been released, especially with the armored batsuit Ben Affleck will wear as the caped crusader.

TDKR depicts a 55-year-old Batman as a reflection of the brutal world he resides in. Gotham City is at its absolute worst due to the Mutant gang’s slice and dice acts for the sake of violence.

Meanwhile, government control is at an all-time high in the U.S. and superheroes are retired per an “arrangement” due to the public being fed up with capes and cowls.

Frank Miller crafts the story to make Batman appear to the public as more criminal than the hero, even though the reader knows the real score. When the climactic battle unfolds on the page, Superman is inadvertently the bad guy since victory will halt all of Batman’s progress in Gotham.

In the upcoming film, it is Superman who fills this role as humanity is split as to whether this strange visitor from another planet is friend or foe. Batman feels someone who has the power to wipe out the entire planet needs to be put in check, his way. As a movie goer, we know that Superman is the embodiment of truth and justice. In a way, this makes Batman the villain because he is trying to stop the Man of Steel from saving lives.

The difference here is that Batman is the ultimate concerned citizen in Snyder’s film while Superman is just following orders in Miller’s graphic novel. Neither one of them are really wrong, but their action ultimately interferes with the greater good.

When Batman dances his final tango with the Joker, he throws a batarang in the clown prince’s eye. He wouldn’t have resorted to such brutality in his prime unless he had no other option. Grumpy old Bat’s did it without hesitation and also paralyzed him. Batman didn’t kill him, but he was framed for the murder, which sets things into motion because the public belief is that Batman has broken his no kill rule.

Experience taught Batman that he had to walk right up to the line of no return in order to deal with criminals. In the movie, the lives lost in the wake of Superman and Zod’s slug fest over the Metropolis skyline tells Batman that he needs to be as brutal as he is vigilant. The presence of unchecked super powered aliens has changed the world forever.

When we finally get to Batman and Superman’s climatic battle in TDKR, Superman is worried about Batman’s well-being despite throwing him around. Miller’s genius comes to the forefront in the final moments of the fight when a weakened Superman says “Bruce, your heart” right before Batman kicks the crap out of him while delivering that epic “One man that beat you” speech.

Miller makes the reader resent the blue boy scout for being a sellout at President Reagan’s beck and call. Then, that all goes away when he utters those three words out of concern in the face of his own death.

The parallels and contrasts between what we’ve seen of BvS and TDKR are intriguing to say the least.

Frank Miller’s gritty dialogue and world building augmented a dark and brooding Batman’s role in the overall scheme of things, which sparked a new generation of fans. Hopefully, Zack Snyder can do the same for the DCU with his creative mind and the cues he’s taken from The Dark Knight Returns.