Harley’s shaping up to ship out of Belle Reve as Tim Seeley takes over on New Suicide Squad #17, the cadets are up to their necks in secrets and competition in Star Trek: Star Fleet Academy #3 and Springfield might not last as ‘A Nice Little Town’ as it survives the conclusion of Cobra World Order in Hama’s G.I. Joe #225.

Still reeling from this week’s Alan Moore inspired Supergirl episode? There’s more to be had in ComiXology for the tie-in weekly Adventures of Supergirl Chapter 2 written by fan favorite Sterling Gates! 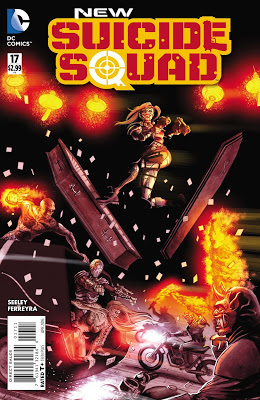 Tim Seeley has been an architect of the current Batman & Robin: Eternal and other Bat-Books, Nightwing and most recently, Grayson.

Aside from his work as an artist and writer on many independent books, Seeley has grown into a DC Comics powerhouse, adapting to these important legacy characters and making them his own.

This August’s Suicide Squad movie will re-introduce the world to Joker and Harley Quinn with familiar faces filling the rolls. Suicide Squad is soon to be a household name, beyond the reach of the CW version we’ve seen in the Arrow-verse.

This jumping on point for readers feels much the same for Seeley, as he has admitted to not knowing much of Task Force X before taking this assignment. This is refreshing for me as well, as I’m not a huge Suicide Squad fan generally speaking, but was excited to check out these pages.

When Fred Van Lente took over on G.I. Joe in 2013, I feel like he had the same attitude, and these were some of the most refreshing stories I have read in the IDW run. Van Lente played it loose but with reverence, a fine line and difficult to do if you are a dyed in the wool fan.

Tim Seeley’s Suicide Squad starts fresh with a basic mission of mismatched baddies selected by Amanda Waller to kick some ass before being locked up again. It’s formulaic for sure but a great jumping on point.  Seeley himself cites Harley Quinn for a big influence on his own Hack/Slash‘s titular character Cassie Hack. All of that seems right.

If his first issue is any indication, there will be roster changes in the coming months and status quo will be messed with. This new run is off to a fun start, and a welcome shift from the issues leading up to #17. 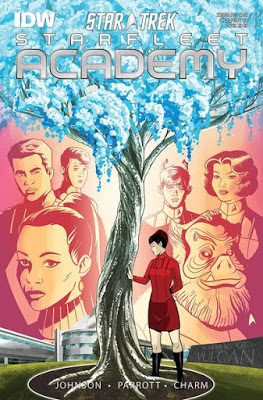 I can’t stop thinking about these or sneaking these Star Trek mini-series into my Triple Shots. I simply cannot, I enjoy them too much! Something about Star Trek and the other Star franchise makes me want to consume like Coneheads on a toilet paper binge.

The Academy played a big role in the 2009 Star Trek movie and this comic fills in a bit of the gap, with Uhura and Kirk discovering some Starfleet secrets as the rest of the cadets go through a bit of Sick Bay version of Kobayashi Maru.

This is the teen team Star Trek book you didn’t know you were missing out on until I told you.

Best of all, CBS keeps this all tight with the continuity. If you are itching for Star Trek Beyond or are a fan of the ongoing IDW series, this book is for you. 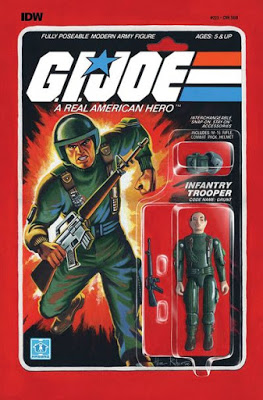 The conclusion to the eight issue bi-weekly Joe event ‘Cobra World Order’ draws to a close with a new threat around the bend!

I don’t know the motivation for pushing out twice as many Real American Hero comics these past few months, but as long as it doesn’t put too much of a strain on Mr. Hama, I’m cool with it.

Cobra Commander has been up to his old tricks with Dr. Mindbender and a newly minted Brain Wave Scanner at his side. The Crimson Guardsmen have infiltrated all levels of society and it is looking like a world closer to the world we saw way back in issue #50.

Are Cobra Commander, Zartan, Destro and the other baddies like Dr. Strange ripoff Crystal Ball safe from even each other? Multiple lines are now drawn in the sand on the Cobra front as we go back to a time when Destro wasn’t always sidekick material, but rather a ruler of the Highlands.

This is a general return to form about what makes G.I. Joe stories great and what makes Larry Hama the only one (apparently) qualified to write new stories for the Joes.

After a couple of volumes of other writers attempting to update the property (see my praise for Van Lente above)!, IDW is left with this book and the other-worldly Jack Kirby art school comic Transformers vs. G.I. Joe as the only books on the publishing schedule.

I’ve left this review spoiler-free for the Yo-Joe Cola addicts out there but I can assure you that issue #226 is starting off on a very scary new status quo. 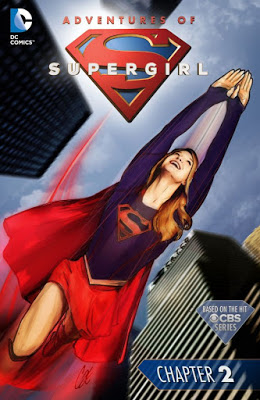 Supreme master of all things Forces of Geek Stefan Blitz got a first peek at this weekly Digital Series way back in January and one thing that we have in common is most certainly a love for TV’s Supergirl.

I’ve seen his fan theories come to fruition on screen and we always talk about how much we like what is happening on the show.

To me, Supergirl is such a special part of my week that I force myself to be in front of the television when it actually airs! No cord cutting for me, just a digital antenna and a commuter schedule that makes it all possible.

Sure, I’ve missed a couple of ‘live’ episodes but I’m downloading that as soon as it becomes available.

Supergirl is a Superman movie for me, for free every week, and I’m not going to waver on this particular routine I’ve locked in these past few months.

Enough about the TV show, already. You get it! Chapter 2 picks up as Kara is defending National City against Rampage. Kara’s (adoptive) sister Alex Danvers is heading up the DEO mission to find the maniac on the loose.

Some great character moments here, like in the most recent episode between the two sisters. Kara may have the superpowers, but her hero is her big sister Alex. What happens when one of these two are in harm’s way? You bet the other is there to swoop in and take action.

The other weekly adventures of the television heroes have fallen flat, are sometimes good and sometimes weak, but Sterling Gates — the writer for making me so fond of Kara before the show — has the essence of the Kryptonian on Earth nailed down.

I’m excited to read this weekly, as floppy comics from the big two recently have been bringing me down!