By that, I mean I’m a freelancer, I get to work from home, and I rarely have to Skype anything from below the waist.

Many think, however, that working from home means copious amounts of free time.

Yes, we have very flexible schedules, but if you ask around, you’ll find most people who work from home probably work more hours than office drones.

Still, no regrets… and no pants.

But given that we tend to work insane hours, we don’t get as much gaming time as we’d like.

For those of us who enjoy a good pencil-and-paper RPG, it can be tough to schedule in the time.

We work weekends, we work evenings. We take a nap around mid-day. We also have families and other obligations to meet. We are lucky if we can find a bi-weekly game to squeeze in, or a board game night once a month.

Fortunately, it is still possible to allow RPGing and gaming into our lives vicariously because the Internet is a thing–particularly YouTube and Twitch.tv.

I’m going to share four opportunities to enjoy gaming as a source of passive entertainment. They’re better than cat videos, and because a lot of what makes roleplaying great is storytelling, you don’t even have to watch these videos.

You can simply listen as you work. 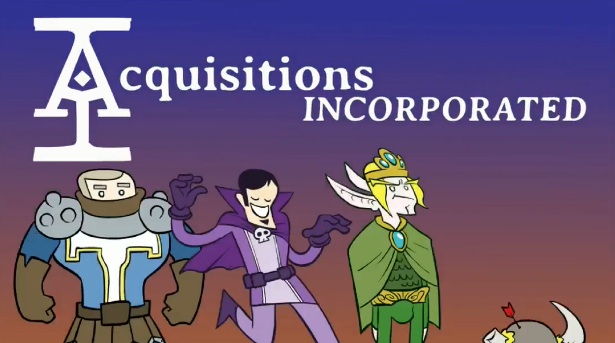 This is how I got into the whole vicarious roleplaying thing to begin with.

Acquisitions Inc. is the creation of the folks over at the webcomic empire Penny Arcade. It started as a simple podcast, but as Penny Arcade grew, and took on huge convention events all over the world, a regular feature of these conventions would be a live play of D&D hosted and DM’d by Wizards of the Coast’s own Chris Perkins. The adventurers are made up of Penny Arcade creators Jerry Holkins and Mike Krahulik as Omin Dran and Jim Darkmagic respectively, Scott Kurtz (PVP Online) as Binwin Bronzebottom, and additional guests, two of the more infamous ones being actor Wil “Don’t call me Al” Wheaton and author Patrick “What ho?” Rothfuss.

Their adventures have included dealing with acid pits, family reunions, dragon cults, the politics of Waterdeep, corporate takeovers, and the Underdark. The game is played with the players sitting around a table on a stage (often with the players and DM in full costume) with a number of cameras broadcasting onto larger screens in front of a packed audience. The game itself goes from serious to funny and back to serious in such a way that the performance is always engaging. 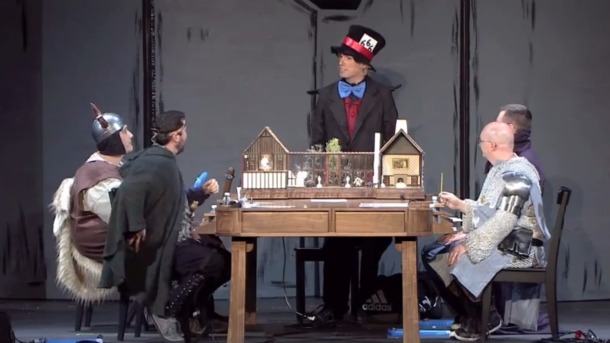 Like any good D&D campaign, there are running themes, recurring villains, tons of in-jokes for long-time fans, and history. There are critical hit rolls and critical fails. Even as merely an observer, you feel as invested in the adventure as the characters themselves.

While hosted at the D&D main website, all of the podcasts and live shows are also available on YouTube. Watch one, you’ll want to watch the rest. 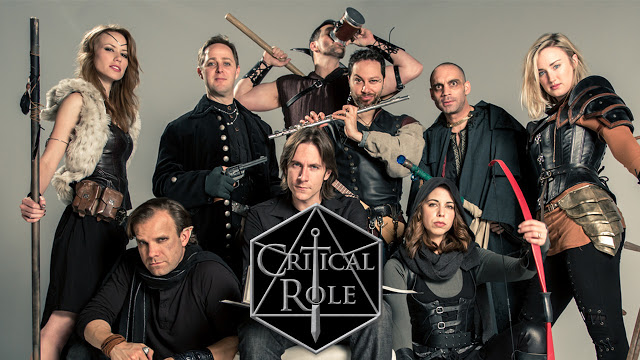 Of all the geek channels out there, Geek & Sundry is probably the largest and most successful. They consistently have great guests and excellent production values. What started out as a Felicia Day project blossomed into a huge geek enterprise with thousands of videos and several very popular regular shows. One of those shows is Critical Role, a live play of Dungeons & Dragons hosted and DM’d by voice actor Matthew Mercer. The gang is mostly made up of other voice actors which is kind of a neat idea. Not only do some of the actors make use of their voice artistry when talking in character, the fact that they are all well trained in how to speak clearly into microphones means that there is no struggling to figure out what is being said, 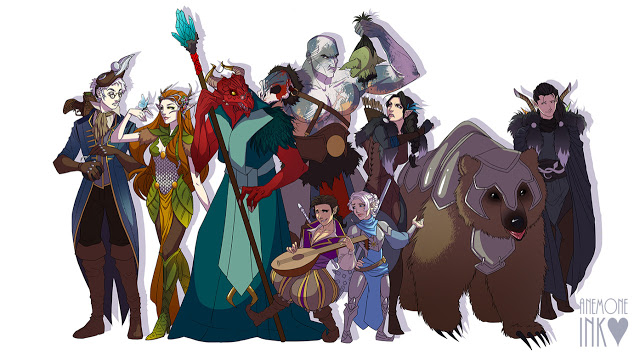 Over the years, the Critical Role gang has embarked on a number of long, detailed, and dramatic campaigns. While the episodes seem overly long–often clocking in at over three hours–they’re worth a listen if you have that kind of time. The production values are excellent, and their use of split screens so we can see all of the players is not as distracting as some other split-screen gaming shows.

Different episodes feature bonus art, fan art, prize giveaways, and special announcements from the gaming world. You get a sense of real family and friends from the players, and an all-round sense that what’s most important is having some fun.

A lot of fun. You should check them out.

More of a board game person than an RPG’er? No problem. And if you’re the sort of person who wants to see some demo play before clunking fifty bucks down on a new game, you’re also in luck because Geek & Sundry has another show you will want to check out: Tabletop.

Tabletop is a show in which host Wil Wheaton and various friends, associates, and relatives join him in playing the latest board games. Because it’s part of the Geek & Sundry family, it has some pretty darn good production values with good camera and sound work, decent on-screen graphics, and a certain clarity of being–which is important if you’re going to be watching people playing a board game. 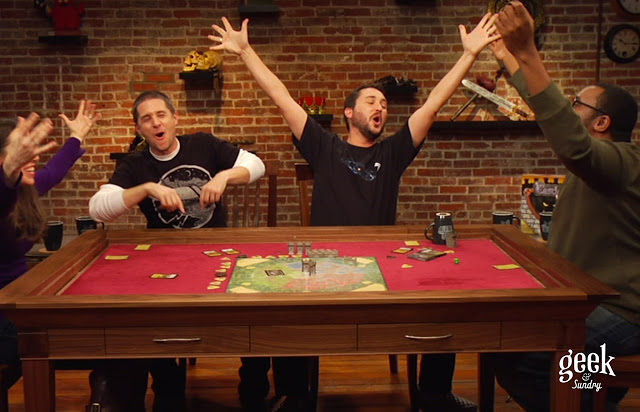 While most episodes are only an hour or so, it’s enough to get in a decent board game playthru. For longer games, such as Small World or Lords of Waterdeep, there are special extended versions that don’t skip over turns in order to speed up game time. These are my personal favorites as they really let you get into the meat and grit of a game. Some games that have been featured include: Settlers of Catan, Elder Sign, Tsuro, Chez Geek, King of Tokyo, Shadows Over Camelot, and Takenoko. Guests have included folk Wheaton has worked with in the past (Colin Ferguson, Felicia Day, Seth Green, Jeri Ryan, Kevin Sussman, et al.), and people from the gaming community such as game designers Chris Pramus and Steve Jackson.

It’s an excellent show with quite a bit of a following. There are currently three seasons with a fourth on the way. If you’re not already watching Tabletop, you’ve only yourself to blame.

Legends of Tabletop and a host of others

It’s not all high production values. There are hundreds of thousands of YouTube channels made by just folk with cameras and microphones. A lot of these folk are gamers, and know that watching other people play is surprisingly more interesting than one would first assume.

What are the Legends of Tabletop? Meh. They’re just these guys, y’know? They love to play games, all kinds of games from card games and dice games to board games and full-on RPGs. Their podcasts and YouTube channel present actual play of several types of games–sometimes with video of the player’s heads, sometimes with just sound. Remember, a good RPG is mostly in the imagination anyway, so who needs video? It all makes for good listening. The sound quality isn’t superb, but it’s a reliable homebrew setup that you can listen to clearly and enjoy. What’s more, is that they’re one out of thousands doing shows like this.

There are better shows, and there are worse shows. Out of the thousands out there, it’s hard to pick one that is truly representative because there is so much variety. I picked this one to present as an example for two reasons: first that it shows that anyone can make a gaming channel on YouTube and the more the merrier, and second because they’re running a Star Frontiers game. 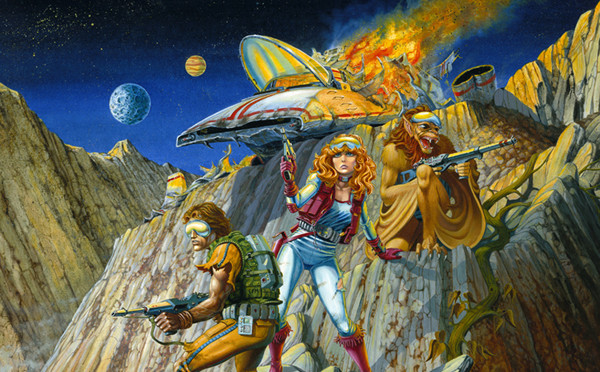 But you don’t have to be locked in by my choices. Just type a game into YouTube’s search bar and maybe add the words “actual play” and you’ll find other channels presenting other games with other folk. Not just role playing games. I’m talking any kind of games from the latest edition of Munchkins or Catan to old Avalon Hill war games. Welcome to the internet, baby.

This, of course, just scratches the surface of what’s out there in actual gameplay online. If you’re a gamer who is having a rough time finding some time to game, you can still, somewhat, enjoy your hobby vicariously through others thanks to the magic of the interwebs.

You don’t even need the YouTube. Just Google up the name of your favorite game, and go from there.

P.S. Has anyone seen my pants?