Such as, when you can’t ever get to the comic book shop for new comics day.

I never can get to the shop on Wednesday before closing time. The shop closest to my house packs up at 6, and I can’t complete my 45-mile commute before 6:15 at the earliest, so no comics for me.

Which is a real bummer when it’s the Wednesday that Black Panther #1, the most anticipated comic book of the year, is coming out.

It’s kinda rare that a comic book about a black superhero is what tons of people are waiting for. But then it’s also kind rare to have Ta-Nehisi Coates — MacArthur Grant fellow, The Atlantic writer, intelligentia mainstay and a leading thinker on race issues – write one. Look, he even titled the 12-issue story arc “A Nation Under Our Feet.”

Every bit of explanation I heard from Coates, and every piece of concept art I saw from Brian Stelfreeze, made me even hungrier for this comic.

And this sucker would have to wait until Sunday to get his hands on a physical copy. Like a sucker.

Yeah, I’m not up on reading comics digitally. Mostly because: (1) I like holding the pages; (2) I just got a tablet and don’t want to carry it on the train; (3) I like paying money to my local shops.

But now I have Black Panther #1. I have read it, I have inhaled it. And, dammit, I am happy.

The book lives up to the lofty expectations. We get immediate action, political intrigue, personal grief, multiple plotlines and the establishment of a mysterious adversary.

Black Panther #1 opens on a Wakanda deeply wounded by foreign coup, alien invasion, and the death of a regent. In those times of national crisis, as history will tell us, insurgents will seize on invalidating those in power, attack seats of power and national symbols.

So it is when the issue begins with T’Challa and his cohort attempt to quell fighting among miners and a mysterious terrorist group at the Great Mound, Wakanda’s gigantic deposit of the precious metal vibranium. It’s as big as it gets when assaulting the nation’s character.

I feel like every time there’s a new Black Panther series, it’s another crack at doing something different with the character. Furthermore, the racial elements of the Black Panther character are so essential to him that the comic book can’t help but engage with whatever ideas of race the author has.

From that underpinning, I was expecting some surprises from a Black Panther story written by Coates. I was not disappointed.

Here are some of the things that tickled, rocked and entertained me, just from the first issue.

Black Panther’s suit has more tech than ever

I’m used to Black Panther having some technological enhancements in the suit. We’ve seen the claws slicing through concrete, the vibranium foot pads allowing him to walk up walls.

But I remember the mask being just that – a mask.

So how cool was it to see Black Panther’s mask wrap around T’Challa’s head? 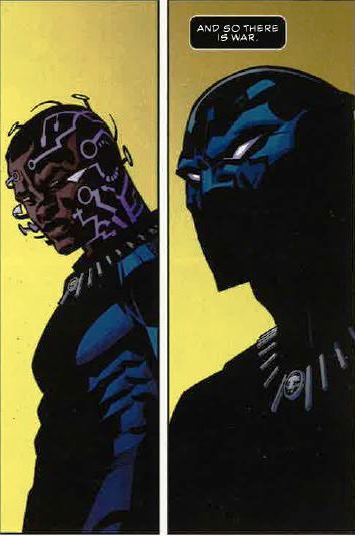 Or to see the idea of vibranium-as-energy source played out when Black Panther does a Jedi force-push? I am psyched to see more of what his suit can do, adding to his already enhanced abilities.

Speaking of which, Coates and Stelfreeze gave us a taste of those enhanced senses in a newish way by augmenting Black Panther’s “soul sense” by which he can discern the living energy of a person in an attempt to track them.

A Wakanda that feels more authentically African than fantasy land

It’s in the designs. When T’Challa activates his mask and the vibranium-powered energy blasts in the suit, it’s not the Tony Stark-like gears and servos. We get an approximations of tribal markings.

It filters down to the naming of T’Challa in Wakandan tongue. The terrorist group known as The People call him Haramu-Fal, the orphan-king. His followers still call him by his inherited name of birthright and trial: Damisa-Sarki, the panther.

Or look at the airship that flies T’Challa to the Wakandan capital, the Golden City. And the prototype battle armor that renegade warrior women Ayo and Aneka steal, codenamed Midnight Angel.

Love among the Dora Milaje

The Dora Milaje are the Wakanda’s national guard, inspired by the amazon warriors of Dahomey, a West African kingdom in the nation now known as Benin. As Dora Milaje warrior Aneka says, they are women “drawn from all the tribes, and forged into a singular emblem of the country. We are the blood-alloy of Wakanda itself.”

But unlike the amazon warriors of Dahomey, these are not women who pledge to surrender their feminity and “become men,” as fighting is for men. In the Black Panther stories of the past 15 years, the Dora Milaje are guardians of the throne devoted to the king himself. He can take one as a wife, so any one of them is a potential royal consort, a potential bride. They call the king, “beloved.”

It’s almost needless to say, but this setup has all kinds of potential problems.

As is unfortunately all too common in mainstream comics, the Dora Milaje become over-sexualized. Just an African flavor of sexy warrior woman we’ve seen from Deja Thoris and Red Sonja on down, catering to male fantasy and gaze, adding exoticism and harem ideas to the mix as well.

“A Nation Under Our Feet” goes a different path following a pair of Dora Milaje on the run, who also happen to be lovers.

Also, from a numbers standpoint alone, how could ever member be straight anyway? So it was good to hear the Dora Milaje speak for themselves, to hear their thoughts and feelings rather than depersonalized guardians.

Aneka is sentenced to death for killing a sexually abusive chieftain and freeing his female captives, placing justice and the victimhood of women above tribal protocol. Ayo pleads for Aneka’s life in the beginning of the story, is rebuffed by Queen Ramonda because of tribal protocol, and then resorts to violence means in the name of justice. 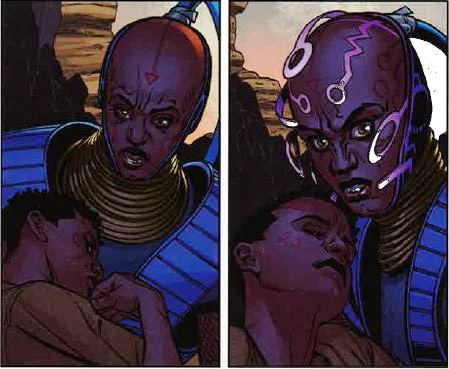 In the span of a few pages, the depth of Ayo and Aneka’s relationship is sharpened from sisters-in-arms to lovers. When Aneka is injured during the prison break, Stelfreeze captures Ayo’s protective rage as the Midnight Angel’s helmet encases her grimaced face and glaring eyes.

The reality of their relationship is made even more clear as they rest beside a fire outside the city, fugitives and rogue soldiers. Stelfreeze’s art places the women in silhouette, but their heads are delineated by the tribal markings of their station, red paint on black bodies by the oranges and yellows of the flames thanks to Laura Martin’s colors.

Ayo and Aneka throw off their devotion to the king, though they still call him Damisa-Sarki. But in doing so, they question T’Challa’s loyalty and effectiveness, they throw off the idea of “living and dying on the blood-right of one man.” And they share a kiss amid the flames before embarking on a campaign of expected retribution. 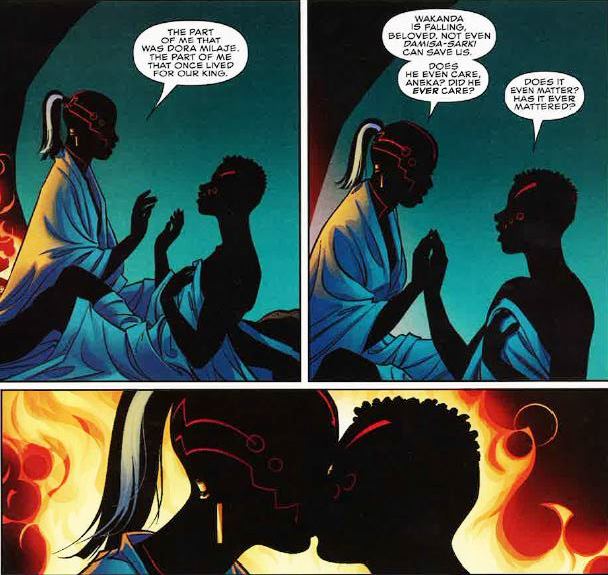 When you combine this development with the threat of apparent terrorist group The People, and their ties to the neighboring Niganda, T’Challa appears beset on all sides.

Ayo and Aneka are doubled in the story by the presence of Zenzi, the mysterious woman with empath powers to feel people’s emotions and seemingly to control them. As Ayo and Aneka shed an identity shaped by a man, this leader of The People, this self-styled liberator of Wakanda is grappling with her role in the movement against T’Challa while she appears to be under the influence of a man, Teti.

Given that T’Challa is a king, it’s easy to spend a lot of time on courtly drama and the limits of power. We’ve seen those stories again and again, as well as stories of T’Challa overstepping his bounds.

Black Panther #1 gives us a little more to chew on. Coates has written extensively about race in this age of Black Lives Matter and combating police brutality. A big theme in Black Lives Matter is the idea that agents of the state, charged with keeping people safe, are doing the opposite. Wakanda whose national character was based in never being conquered, never being broken, and how the Black Panther is key to that.

After an invasions and coup attempts by supervillains, and T’Challa’s sister Shuri killed while holding the throne and Black Panther title in T’Challa’s absence, this is a Wakanda that doesn’t know what it is any more and feels ashamed of how weak the throne appears to be.

So much uncertainty, anger and distrust.

Another part of that national conversation has been how, amid the increase in video technology, we’ve had more cases of police accounts of shootings be completely contradicted by videos. We’ve seen videos of death and mistreatment shared virally.

It’s no different in Wakanda.

At the beginning of the issue, a miner is shot in the back by a royal soldier’s energy spear. Stelfreeze draws the scene with the miner in the foreground, crying out in pain, as the soldier holds aim behind him. That same image is repeated at the end of the issue, on a giant video screen in the capital city.

Within that same panel, people are shown looking at video of another guard injuring an apparently unarmed miner on what looks like a holographic screen powered by the “kimoyo band” bracelet tech.

I imagine that as these images spread in Wakanda, it will be even harder for the nation’s people to turn away, or to trust their authorities.

All of this happens in just the first issue. “A Nation Under Our Feet” already is repositioning Black Panther in ways I don’t remember, while loading up a bunch of intriguing mysteries to come.

Even the depiction of T’Challa as being driven by survivor’s guilt, that people around him die as he remains standing, feels fresh and new for him.

The first and last pages encapsulate all his failures as a man out of place, from his nation to his family. 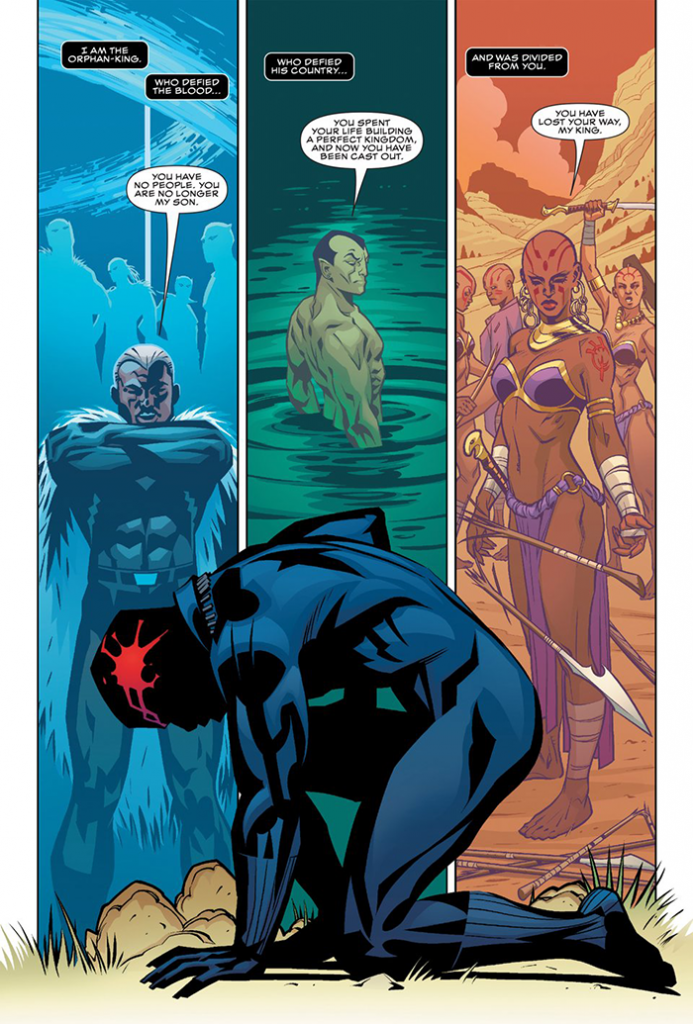 Really makes you wonder how much farther Black Panther can sink, and how much harder he’ll have to claw his way out.