For this installment of Cool Shirts, I took a look at some of the shirts from Nerd Kung Fu, which might very well have the largest selection of pop culture t-shirts that I’ve ever seen.  Among their latest additions are over dozens of new designs centered on Daredevil, Captain America: Civil War, The Blues Brothers, The Breakfast Club, Back to The Future, Moon Pies, Def Leppard, Evel Knievel, The Karate Kid and much more! They also carry shirts in sizes small through 7XL and the site is filled with lots of nerdy trivia on the history of t-shirts! 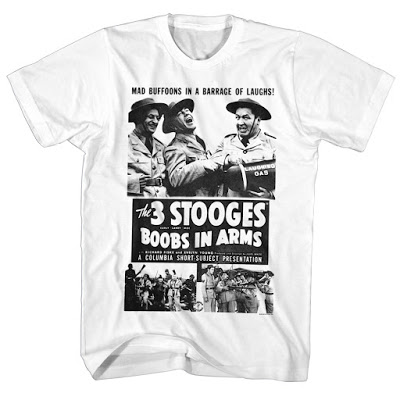 My new favorite shirt, with the boys in a movie poster style design from the 1940 short, Boobs in Arms.

In this Stooge short, the boys are greeting card salesmen who try to help a wife by posing as her lovers.

When her husband comes home, he sees the Stooges and chases them outside, where they hide in a line of people. Unfortunately for them, it’s a line to sign up for the Army!

From there it’s all hijinks and laughs as the boys get mistaken as bayonett practice dummies, overdose on laughing gas, mess up their enemy’s headquarters and get shot into the sky on a bomb. 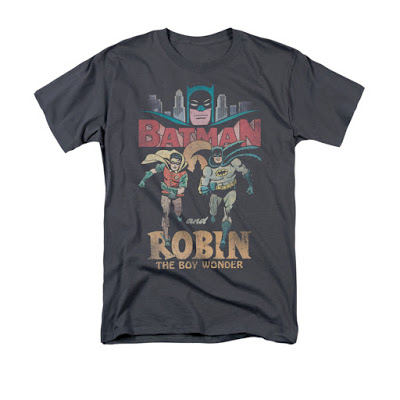 With the Caped Crusader placed in front of the Gotham City skyline, this shirt depicts the Dynamic Duo, Batman and his sidekick, Robin The Boy Wonder as they race toward whatever criminal menace faces them.

With bold graphics and art inspired by Carmine Infantino and Murphy Anderson, this shirt is a must have for any fan of the classic comic or 1966 tv series!

Holy fashion statement!  This is one shirt that belongs in your Bat Closet!

Now, to the Batmobile, chum!  We haven’t one moment to lose! 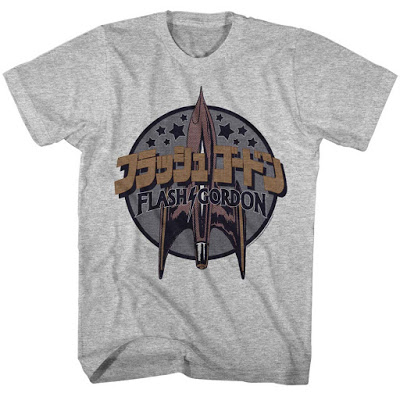 The 1980 movie is one of my all time favorites.  From the production design to the costumes to the music to even the performances.  It’s just fun.

Equally as fun is the original strip created by Alex Raymond. Comics, movie serials, tv, action figures and more have made Flash Gordon a recognizable hero for generation after generation.

This shirt combines an art-deco Raymond designed rocket against a shield with the logo and some inspired alien language.