The curtain rises on a maintenance-man hanging on for dear life as the platform below him begins to buckle.

Then the worst imaginable happens.

His can of Tab cola falls into the dark abyss below him as the beginning notes of Donna Summer’s HOT STUFF begins to thump.

If you’re not aware what you’re in for before entering the Nederlander Theatre, you’re about to find out faster than you can demand to “turn the beat around.”

DISASTER! comes from its successful word-of-mouth hit off-Broadway run, a little too small in execution for the grand Nederlander stage, but none of that really matters.

This is a critic-proof farce tailor–made for us survivors of the 1970s at its kitschiest.


The plot piles on the best (worst) clichés of the disaster films of the period, from The Poseidon Adventure to Earthquake to Airport to The Towering Inferno to even Piranha (!!!).

Technically, the characters are also a spin-off of the highly successful cinematic genre.

There’s the guitar carrying nun, the money-hungry business owner, the vacationing retirees, the sultry singer, and of course the scientist she may be having an affair with.

My favorite performance of the show is from young actor Baylee Littrell, who pulls off twins Ben and Lisa, a conglomerate of the token kid thrust into the dangers on board the Barracuda, the first floating casino and disco in New York.

Director and co-writer Jack Plotnick moves the action along really quickly, which works as the show’s musical numbers often zip in at breakneck speed. Some of the musical cues are even simply there as punchlines to a line of dialogue. 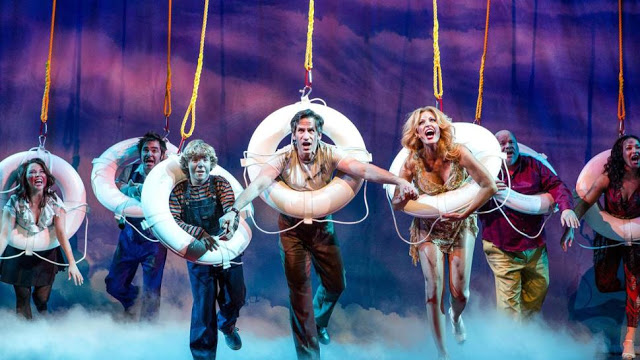 The compartmentalization of the songs, the characters, the set pieces, all goes well with the concept, and this bigger budget upgrade to the Great White Way is tailor made for switching out talent when available.

Right now, I recommend seeing this initial cast, as everyone is perfect in their roles, but it’s obvious this show is a dream for musical comedy actors ready to join them in a tap-dance Hustle number.

Oh, and the songs.

There are so many great seventies songs in this show, from the obscure Sky High by Jigsaw to the annoying earworm of Blue Suede’s Hooked on a Feeling.

Though its set in 1979, the disco numbers are not overwhelming. There’s plenty of celebration of the entire decade’s jukebox. You’ll think the person next to you left their phone on Sirius’s 70s on 7 before the lights dimmed.