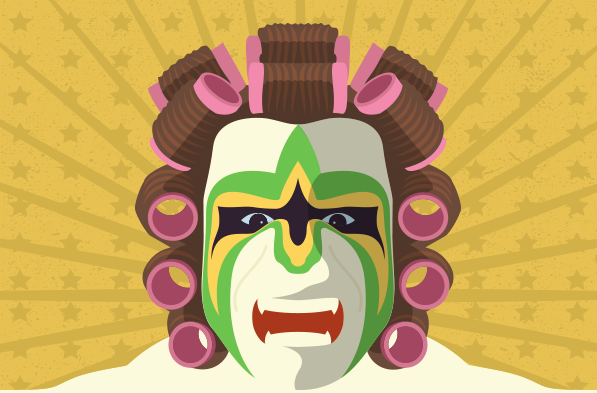 The story of professional wrestling can be told many ways.

It can be shared through the personalities that defined it: larger-than-life figures like Hulk Hogan, Vince McMahon and John Cena. It can be told through the fights that made it great: unforgettable matches like Wrestlemania, The Royal Rumble and Hell in the Cell. Or you can tell it through the hair. From The Ultimate Warrior’s flowing mane to Daniel Bryan’s hipster beard, every iconic wrestler who has ever entered the ring has had an equally iconic hairstyle.

So let’s go on a journey through the history of wrestling and take a look at some of the hairstyles that deserve their own place in the WWE Hall of Fame.

Professional wrestling as we know it today was born in the 1980s when Vince McMahon started expanding his World Wrestling Federation across the United States. Prior to this, wrestling had never had a nationwide stage. Finally it was being broadcast all across the country, and its biggest names, like Hulk Hogan and Randy Savage, were becoming instantly recognizable celebrities. These insane, over-the-top personalities were a direct reflection of the over-the-top excess that was so popular during one of America’s most affluent decades. Their hairstyles embodied that exact same excess.

Mousse mania hit America in the ‘80s, making big hair a big trend and giving some of the biggest wrestlers their most memorable looks. Ravishing Rick Rude and The Ultimate Warrior both piled on enough product to put their sky-high hair in completely new weight classes. Mullets also reached the height of their popularity in the ‘80s. The business-up-front/party-in-the-back look was rocked by wrestlers like Hulk Hogan and Rowdy Roddy Piper, who worked hard in the ring and partied just as hard out of it. Music videos also had a huge impact on hair trends, with kids shaving their heads and spiking their hair to mimic the punk-inspired looks of their favorite artists. Wrestlers weren’t immune to the influence either, with duos like The Nasty Boys and the Junkyard Dogs sporting mohawks that would look right at home in a Cyndi Lauper music video. And why not? Ms. Lauper became synonymous with wrestling in the ‘80s when the WWF featured her and her new wave, neon hairstyles, as special guests in dozens of matches and televised events. Cyndi returned the favor by casting wrestlers like Captain Lou Albano in some of her most memorable music videos.

The early ‘90s put a sudden but definitive end to wrestling’s Golden Era when the WWF suffered a series of unfortunate setbacks. A steroid scandal took some of the biggest superstars out of the game, while others were recruited by competing organizations like WCW and TNT Nitro. In response, Vince McMahon started introducing more realistic characters with edgier storylines and less PC attitudes. This became known as the Attitude Era of the WWF. To match the new, more realistic characters of the ‘90s, the over-the-top hairstyles of the ‘80s were quickly phased out.

Wrestlers like The Edge and Shawn Michaels embraced the “I don’t give a sh*t” attitude of the slackers and grunge rockers who dominated the music landscape of the early ‘90s. They let their hair grow long but not up. Instead of slathering them in mousse, these wrestlers let their lengthy locks fall to their shoulders, unkempt and uncared for. Other wrestlers opted out of hair care altogether, with the shaved head look becoming more and more popular among wrestlers like Stone Cold Steve Austin and The Big Show. Of course, the ‘90s did have its fair share of outrageous looks, but those tended to lean more on makeup and masks than hairstyles. Kane and Mankind both cultivated scary, unstable personas, with both men wearing masks to suggest they had escaped a mental facility moments before entering the ring. Goldust, meanwhile, embraced his inner David Bowie by covering his face in heavy gold makeup and donning a long blonde wig that could have been stolen from a drag queen’s changing room. But while these characters may have been larger than life, they all had an edgy intensity that separated them from their 1980s counterparts.

By the early 2000s, the success of the WWE — renamed from WWF to World Wrestling Entertainment in 2002 — was on the rise again, and all of a sudden, there was too much talent for just one show. Mr. McMahon’s two flagship shows, Monday Night Raw and Smackdown, both started airing once a week, introducing the world to a whole new generation of wrestling superstars. But the biggest name to emerge from this new roster of talent was John Cena. Cena’s friendly image and clean-cut looks appealed to kids, who were quickly becoming one of wrestling’s biggest demographics; thus the PG era was born. The edgier themes and personalities of the Attitude Era were dropped in favor of kid-friendly storylines and stunts. This was when you were likely to see a leprechaun emerge from underneath the ring or wrestlers engage in backstage antics with celebrities like Johnny Knoxville, Snoop Dog or the Muppets.

Cena’s hair was the perfect symbol for this squeaky clean time in WWE history. His perfectly trimmed, military-style flat top was the kind of haircut parents would be happy to see on their kid. Even the edgier wrestlers of this era kept their hair to respectable lengths. CM Punk, one of the biggest bullies in wrestling history, still kept his beard perfectly trimmed and his hair sensibly slicked back. There were still some pretty out-there hairstyles during this time, but they mostly belonged to the dastardly heels instead of the heroic faces. Just look at a wrestler like Sheamus: He’s flipped between good guy and bad guy several times in his career. Whenever he’s bad, his hair becomes a wild mohawk, and when he’s good, it’s styled back into a respectable buzzcut. Even the guest stars kept their hair looking sane and sensible. Presidential candidate Donald Trump puts a lot of work into keeping his comb-forward haircut in tact. He must have been working extra hard during his stint as Monday Night Raw’s general manager, a period in the mid-2000s when he was regularly stepping into the ring.

Today we’ve entered the Reality Era of WWE, a period where fans are given a look at the inner workings of the wrestling business. The wrestlers of this era cultivate characters based on their real personalities, and their hairstyles are just as real as they are. No one exemplifies this better than Daniel Bryan, a hipster wrestler with a bushy beard that would look right at home in a Portland coffee shop or on an Austin open mic stage.

Who knows how long we’ll be in the Reality Era or what will come after it. The only thing we know for sure is that the WWE is going to remain big, brash, over the top and forever fascinating, with wrestlers and hairstyles to match.