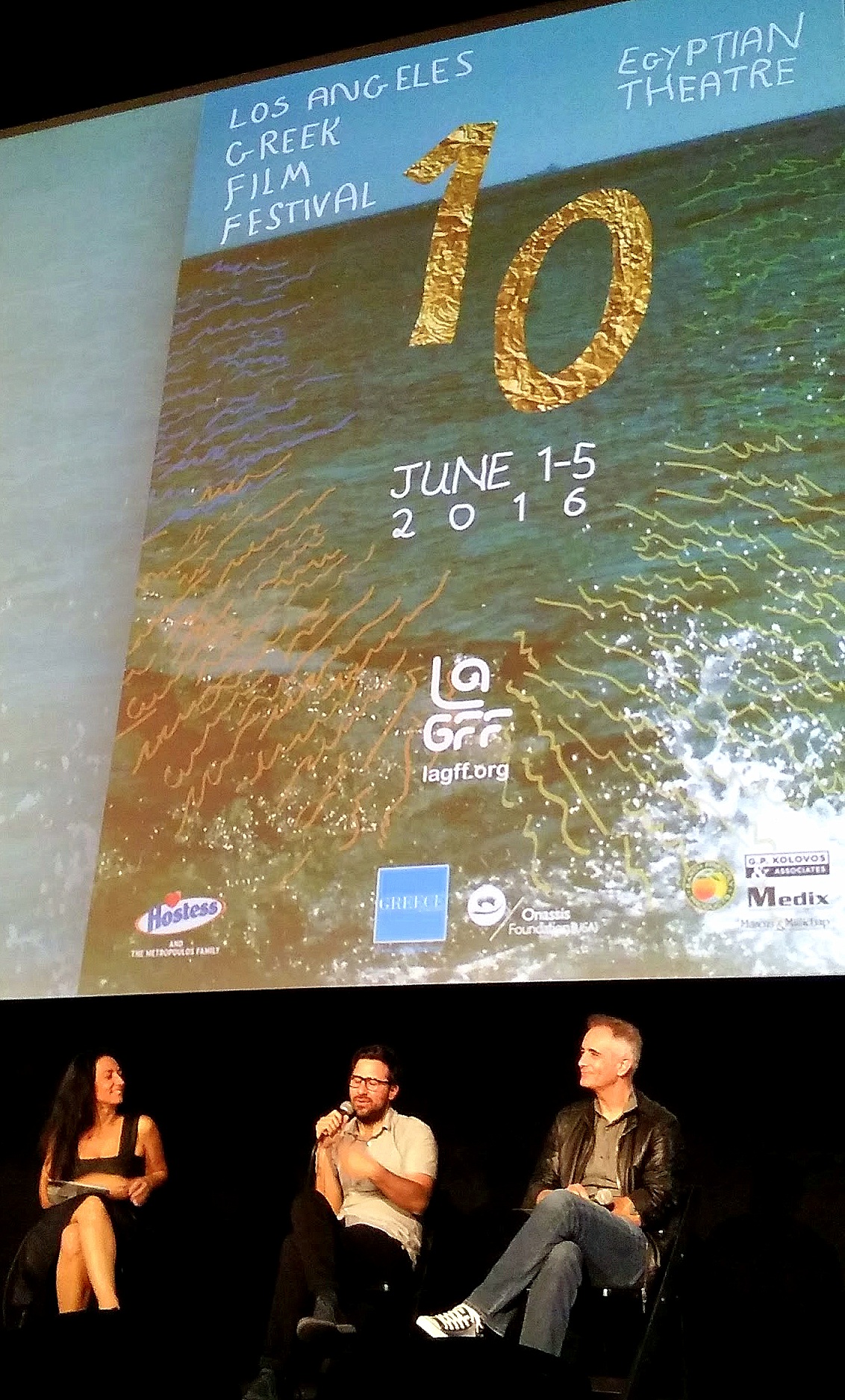 Back in the humid summer of 2009, a Boston area arts collective known as Whitehaus decided to put on a three day music festival that featured an amalgam of New England area experimental music acts of varying degree of freakiness. In honor of the fortieth anniversary of Woodstock, they aptly entitled the weekend extravaganza “Weirdstock.” Gracing the high school styled stage of the swampy Cambridge YMCA were bands with names such as Psychic Vagina, Truman Peyote, and Ming Ming Dance Company, who provided the audience with music and performances that ranged from deafening instrumental and transistor created noise to silent motion. I gleefully attended all three days and nights, which was a feat as earlier that same summer, I had been sent to intensive care at Mass General for sepsis from a kidney infection.  So, while the bands did their best to take the audiences out of their heads, I was already a bit gone, as the infection left me with a picc IV in my arm that went straight into my heart, and an uncommonly strong prescription of dilaudid inspired a William Burroughs state of mind. All of this lead up to a Saturday night performance at Weirdstock from the Boston band, Dreamhouse, that forever changed my perception and expectations of a performance.

Dreamhouse began their set (the last performance of the night) by insisting that the entire audience of over a hundred people drape a large plastic tarp over themselves, even though we were indoors and away from the elements. Once we were all under the same synthetic shroud, the band began to blast a sonic assault of sounds and throw intense lighting at the onlookers that was even more intoxicating than the opium derivative that I had taken earlier in the evening for my kidney pain. About twenty minutes into their set came another array of bursts of light and sound that didn’t seem too out of line with what looked like the intended goal of the artists, though the visual and audio of this new sensory experience seemed too uniform in its frequency.  We all kept watching in psychedelic awe for many minutes until the event organizers began screaming “fire!” Again, was this part of the performance? We still had no idea and many of us began to yell in response “burn fire burn,” but as you may have guessed, there was an actual fire, and those additional lights and sounds were the old building’s fire alarm, which normally would’ve inspired a mass exodus, but given the experimental nature of the goings-on, these normally alerting sounds were seen as just another part of the show. In my mind, I had always imagined a moment like this, where performance and reality would be blurred, but prior to this experience, I had always thought that in such a situation that I would have easily disseminated what was artistic creation and what was dire circumstance. I thought incorrectly, but what was not lost on me was the immersive element of real life incorporated into performance and how that moment was perceived by those around me…

Two weeks ago, as part of the Los Angeles Greek Film Festival at the Egyptian Theater, my wife and I took in the area premiere of Interruption, the debut feature film of director, Yorgos Zois, who was in attendance for a question and answer session after the screening. As we would eventually learn from the director himself, Interruption is inspired by a real-life event. Back in 2002, fifty heavily armed Chechens entered the Dubrovka Theatre in Moscow and took upwards of nine hundred attendees hostage whilst a performance of the musical, Nord-Ost, was in progress. The audience for a short time believed that the violence occurring before them was actually part of the show, perhaps some sort of experimental theater that had not been announced, and they would only became aware of the reality once ghastly events began to happen before them. After four days of negotiations, the police had to take the theater by force, which resulted in the deaths of one hundred and thirty hostages and forty terrorists. 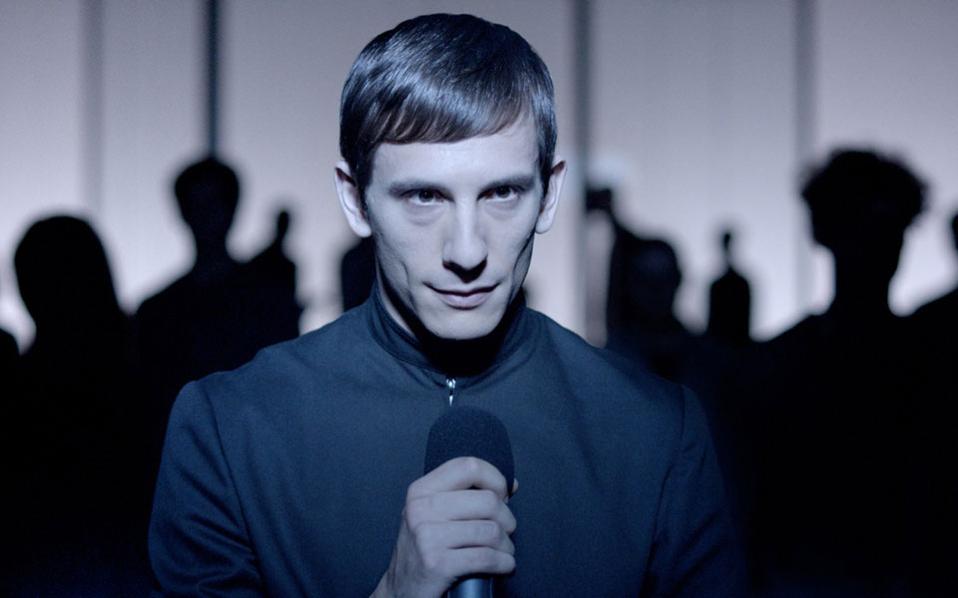 Set in a theater in Athens, Zios’ daring film Interruption uses a post-modernist adaptation of Aeschylus’ classic Greek tragedy, Oresteia, as the center of his meditation on the Dubrovka Theatre incident. While a performance of the play is taking place, the armed Chorus, consisting of seven people, forcibly takes the stage and apologizes for the “interruption” and then soon calls out for a group of audience members to take the stage so that they can establish an order for the remaining narrative. Now, several more members of the audience mount the stage, which prompts the leader of The Chorus, who takes a seat in the front row, to interview this new assortment of audience volunteers one after another, asking about their professions and even going as far as asking some of them personal questions regarding their romantic relationships. Out of this group of audience volunteers is one professional actor whom the Chorus leader casts in the role of Orestes, who, based on the original text, has the intention to murder his own mother, Clytemnestra. Now onstage are two people portraying Orestes, and the line further blurs between spectator and actor, and with it, a debate that argues the necessity to carry out Orestes’ act of matricide from a moral standpoint against the original narrative of the play, further breaking down the structure between the intended goal of the author and the role of the spectator as passive observer. 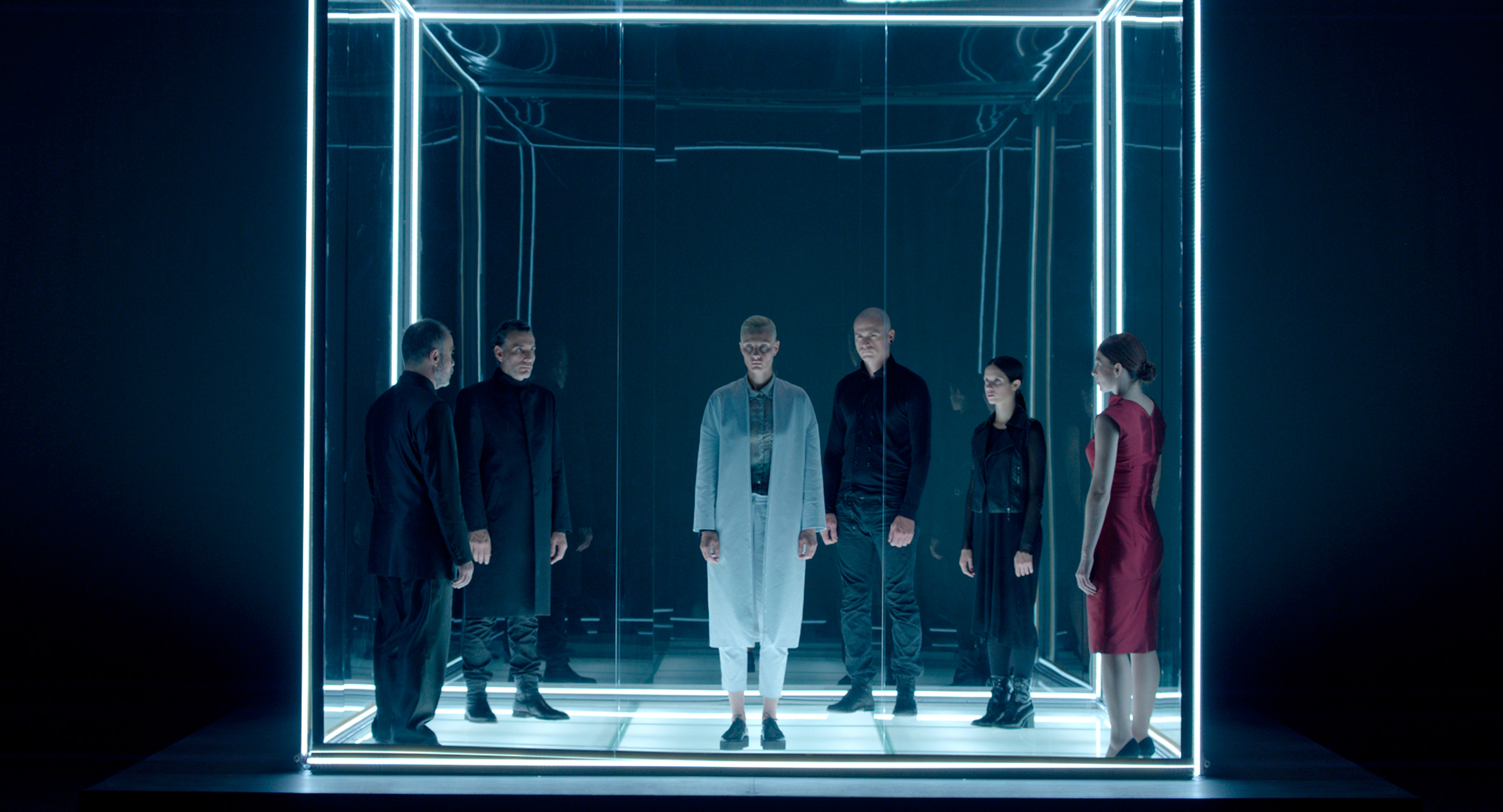 So, what role does the filming of this event serve in this adaptation? As Zois explained:  “I wanted to create a cinematic world where the viewer could use all his senses and experience a voyage to a world that blends the limits between life and art, fiction and reality, logic and absurdity. A cinematic enigma that offers no single solution but offers you the chance to see a different view each time you look through a different view. This film is about the art of viewing and what does viewing mean and the point of view, and no one sees the same thing in the same way. So for me, Interruption is about the ambiguity of the process of life itself.” Zois and cinematographer, Yannis Kanakis, indeed utilize the camera to give the viewer varying perspectives of the play, normally produced for live theater, that allows the film audience a multitude of perspectives via the camera’s placement onstage. The use of close-ups to highlight small facial gestures, gentle movements and small whispers that would normally be obscured from the view from seats in the balcony allows Zois full freedom in presenting a plethora of options for the film audience to create their individual experience in parallel with the deconstruction of the classical narrative’s structure, giving the viewer a chance to examine the root message of Aeschylus’ tragedy without a predetermined language dispensed from actors, which enables the purity of one’s own interpretation.

Interruption is as ambitious and entirely successful a debut film as I have seen so far this year.  The word “immersive” doesn’t begin to describe the experience that left me drained as a viewer, but I wasn’t alone as Zois will be taking significant time off before creating another film, if any, as he admitted after the Q & A  that the production emotionally wore him out. I then realized that the only perspective that never entered my mind while watching Interruption was that of the director, whom you never see onscreen, reinforcing what I learned at Weirdstock: the importance of examining varying perspectives, seen and unseen, at all times.