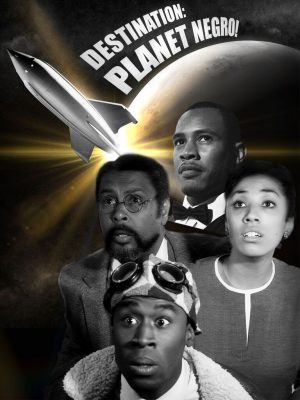 A harsh country. An oppressed people. One dream. One daring mission.

This is where Destination: Planet Negro (Candy Factory Films) begins, as a collection of black leaders in 1939 decide to solve Jim Crow segregation once and for all by building a rocket to colonize Mars.

Of course, things go awry, and our spacebound crew wind up traveling through time to the present day.

Destination: Planet Negro rockets in with the energy of Forbidden Planet-meets-In Living Color-meets-The Boondocks, only to peter out a bit trying to say important social commentary about race while still trying to cling to its spoofy roots.

As a spoof, Planet starts off great. The black-and-white footage, the rocket ship straight from a Fleischer cartoon, even Strom the robot call back to Forbidden Planet and schlocky bad sci-fi movies I grew up making fun of on Mystery Science Theater 3000.

W.E.B. DuBois (Harvey A. Williams) and George Washington Carver (George Forbes) come up with the secret plot to solve the “Negro problem” by leaving Earth entirely, akin to Douglas Turner Ward’s famed 1965 comedic play Day of Absence – in which a group of Southern whites wakes up to find nearly all the town’s black people have disappeared, leaving no one to shine their shoes, raise their kids and clean their houses.

With the designs of Carver and “the only colored physicist in the world” Dr. Warrington Avery (writer-director Kevin Willmott), that plot is a reality. The silly-solemnity of the situation is punctuated by the arrival of Carver, who explains his radioactive rocket fuel derived from peanuts and sweet potatoes by, you guessed it, holding an actual clump of peanuts and a sweet potato in his hands.

Carver takes the air of the Boondocks cartoon as he shuts down the naysaying Dr. Horn (Walter Coppage), calling Horn a “motherfuckin’ Uncle Tom” and saying that he’s sick of “white folks kickin’ our asses” while not receiving proper compensation and prestige for his inventions.

In one of the funniest bits of the movie, Carver distracts a racist sheriff with a Sambo routine, bugging his eyes out and singing a lullaby to a violet that begins with the words, “darkies never dream.”

Planet also smartly gets some digs in at the school of seeking black progress at the expense of women. When ace pilot Capt. Race Johnson (Tosin Morohunfola) tries to woo assertive scientist Dr. Beneatha – get it? – Avery (Danielle Cooper) with a vision of a black future as a wife and mother only, she rightfully likens his proposition to the racism that says black men are made to serve white men.

Destination: Planet Negro shines brightest in this alternate version of the past, in which the great heroes of Black History Month are presented by turns as “real talk” Samuel L. Jackson-style frustrated, as well as daffily conditioned by their plight. How else could you explain a robot built with the personality of a slave master?

The spoof energy stays strong as the crew accidentally travel through time to present-day Kansas City, and they fail to grasp the future right away. It allows for strong points such as the conditions of undocumented migrant workers, the places left behind amid racial integration.

At its most pointed, Planet shows an appreciation of the faint-inducing prospect of folks straight from the era of Jim Crow, race riots and lynching coming to grips with the president being black – and being named Barack Hussein Obama, at that.

But when the rocket ship’s crew veers off course, Destination: Planet Negro does a bit, too, as it tries to wrap up the plot and dive into other bits of social commentary best left to those who know better.

Planet couldn’t get through this satire without a certain amount of tired and retrograde jokes such as black people not pulling up their pants. We even get a reverse Stir Crazy in which a white hip-hop artist teaches Johnson how to walk hip, though Morohunfola does some great physical comedy.

Of course, there’s also discussion over the N-word, as if black folks from the 1930s didn’t use the word themselves the same as now. I can tell you for a fact that my grandmother, born in the 1910s, did.

In these “stay woke” times of Black Lives Matter, campus unrest, police reform, and more, it’s at times surprising to see Warrington, Beneatha and Race alternately behave as Pollyanna-ish blank slates to learn the nation’s racial situation and that progress doesn’t take all the forms we’d think it might.

But I guess this is what we should expect in movie that began work in 2013 and put together by Willmott, a co-writer of Spike Lee’s controversial film Chi-raq, which drew praise and criticism for its depiction of black people’s problems and solutions.

Destination: Planet Negro gets in the weeds for quite some time as it pushes deeper into social commentary before it remembers that a plot needs a villain. In walks politician Howard Horn – yes, a grandson of the original naysayer – with a Tea Party-style, nativist campaign and contempt for Warrington and new friends B-12 (Empire’s Trai Byers) and Afro-American studies professor Karen Wilborn (Samra Teferra).

The movie eventually remembers to get back into spoof territory. You’ll have to see it for yourself, but the climactic comeuppance for Horn is either the most audaciously homophobic thing you’ve seen in a while, or the most ridiculously progressive.

At the very least, Destination: Planet Negro gets as reckless with maintaining integrity of the timeline as Barry Allen on The Flash. And that’s saying a lot.

But if this movie’s time travel shenanigans pan out the way I think they do, my column’s many ruminations on race may never exist. That would be OK by me!