This installment we will be focusing on a few off the cuff titles apart from the mainstream. So let’s get started! 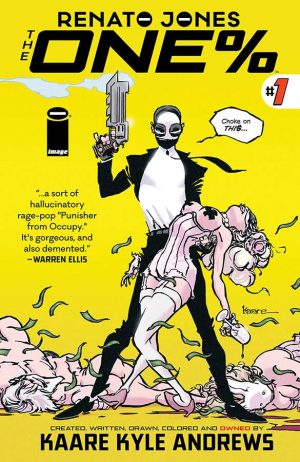 Renato Jones The One% #1

Written and Illustrated by Kaare Andrews
Published by Image Comics

This book is only on it’s first issue and it shot up to be one of my new favorite titles. Kaare Andrews is a serious talent. I will always check out what he does. I found his last comic book work, Marvel’s Iron Fist, lackluster. But his work on Spider-Man always makes me pay attention to him for any new projects. I am glad I picked this up.

This character does come off like a more cerebral Punisher. Lets get that out of the way. But Andrews can tell a story like nobody’s business. His writing and his artwork works so well and hand in hand. It’s about a vigilante out to make the rich pay for the crimes they committed. It’s smart, topical, and strong. It’s also a pleasure to read.

The book moves at a great clip and Renato Jones is a well drawn character. It’s visceral in a way we don’t see often.

Passion is a big thing with me. Andrews has it in spades. The pages here drip with it. Andrews has poured his heart and soul in this first issue and it shows. It’s dense without being dense. It’s literary. And it’s awesome. Pick it up. You won’t regret it. 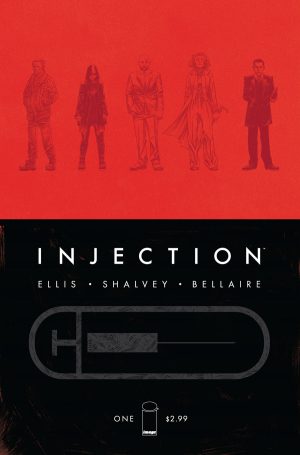 I am glad to see Image Comics supporting some great titles. This is another one they are currently publishing. Warren Ellis has written a great science fiction tale and it’s riveting.

A few years ago, Ellis had the amazing Planetary comic book he had written. It was full of ideas and had stunning art. This is the same exact type of comic.

In fact, Shalvey reminds me of Cassaday, yet is his own artist. I am anxious to see where it goes. Each issue feels like a puzzle piece to a big picture. I love that.

Ellis is a great writer. Shalvey is a great artist. They are both at the top of their game on this title. Another favorite that demands after you read it to re-read it.

Worth every penny. You get your money’s worth as you will happily re-read it multiple times. Pick it up. 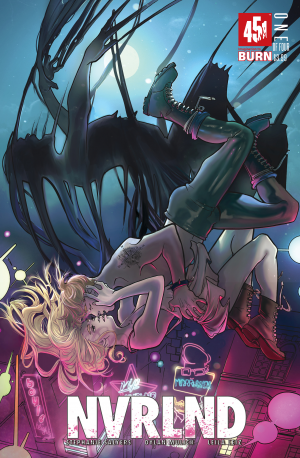 Written by Stephanie Salyers and Dylan Mulick and Illustrated by Leila Leiz
Published by 451 Media.

For the next review, here’s a title that made me exclaim “What the hell am I reading?” Yet another “take” on the classic Peter Pan story. This one is more interesting than most, yet I do feel it borrowed cues from the independent film Neverland, a 2003 film directed by Damion Dietz.

Peter and the Lost Boys are in a band. Hook is a tattoo artist that sells a Fairy Dust drug. This is their story.

Like I said, it seemed a little too close to the film I saw. But it did have some nicely written moments. It moves at a nice pace and never is boring at least. The art is actually pretty nice. Good storytelling on it. It just feels somewhat…bland. It wasn’t terrible. It just didn’t thrill. It may get more interesting as the series progresses. I just haven’t seen anything to grab onto yet.

So, not a bad debut. Could be a lot better. Or it could go to hell quick. Let’s hope the team has a plan in place. Otherwise, it won’t be worth following at all. 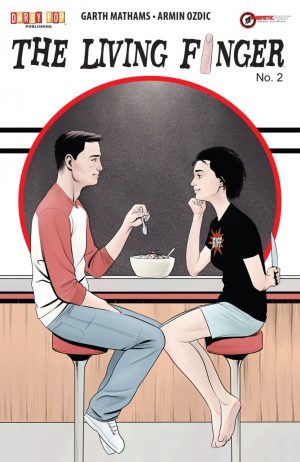 Part two of our “what the hell am I reading?” is this book. The Living Finger. I reviewed number one last month, and honestly, this is great. It’s NUTS. but I am enjoying it. I might be tapped. These creators certainly are. Good for all involved.

Basically, a man finds a detached finger. He calls it “Wendy.” He learns how to talk to it via tap code. All it wants is to be attached to a human. And it’s a morbidly crazy romantic sweet tale that follows.

I mean, These guys are doing it. They have a nutty premise. They have nothing but good writing and fantastic art(the cover to number two is my favorite cover this month)

It’s compelling. And I love it.

This book isn’t for everyone. But hell, it’s out there. And the world of comic books is better for it’s existence. Bravo.