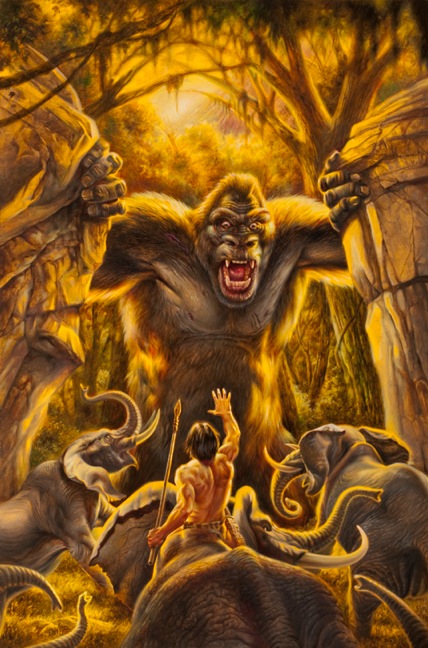 Written by the acclaimed author of the Wild Adventures of Doc Savage novels, Will Murray, who previous pitted Kong against Doc in Skull Island, King Kong vs. Tarzan takes place during the fateful and dangerous voyage when Kong was transported from Skull Island to New York City. DeVito’s cover depicts the dramatic moment when the Lord of the Jungle first encounters the Beast-god of Skull Island, who has invaded the ape-man’s African domain.

The author notes, “I was writing the book while Joe was painting the cover. One day, just before I came to the cover scene in my manuscript, he showed me an in-progress version. I was blown away. So I made sure to describe the gorgeous golden light of late afternoon suffusing that fateful first encounter, and thanked my lucky stars I hadn’t planned for it take place at night! Joe and I forgot to discuss that important detail.”

The artist says, “This fabulous new story posed an interesting visual problem: How to make two such disparately sized characters appear equally prominent in the same image? Far more difficult would be the conception of a cover that would be more fun to paint!”

Fully authorized by the estates of Merian C. Cooper and Edgar Rice Burroughs, King Kong vs. Tarzan is slated for release this summer.