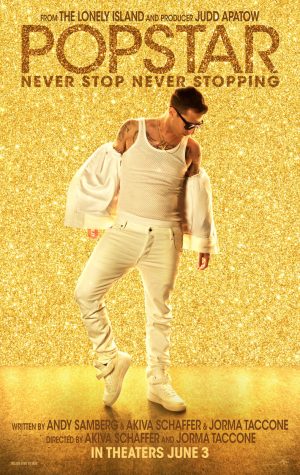 The Lonely Island boys (Andy Samberg, Akiva Schaffer, and Jorma Taccone) serve up nearly non-stop laughs in this mockumentary about a Justin Timberlake-esque pop star (Andy Samberg) whose solo career implodes with his second album. Soon the pressure is on to reunite the band that made him famous, The Style Boyz – who are clearly modeled on The Beastie Boys, if they’d never left their “Fight For Your Right to Party” roots and were cursed with the awful fashion sense of NSYNC.

The movie mercilessly skewers oversharing, social-media-addicted celebs and the media that obsesses over their every move. (TMZ is sent up particularly hard.)

Samberg is perfect as the cluelessly self-obsessed pop star “Connor4Real,”who Instagrams his every waking moment and is surrounded by a slavish entourage that includes someone to punch him in the stomach to remind him to “keep it real” and a doctor for his beloved turtle, Maximus.

Childhood friends and fellow Style Boy Owen (Jorma Taccone), has been demoted from bandmate to Connor’s unappreciated DJ, while the real lyrical brains behind their trio, Lawrence (Akiva Schaffer), is now a farmer who spends most of his time making art about how much he hates Connor for not giving him credit on their biggest hit.

Popstar is stuffed with celebrity cameos as real-life musicians like Usher and Questlove gush about their love of The Style Boyz and devotion to Connor. To list them all would spoil the fun, but yes, “Dick in a Box” costar Justin Timberlake has a small but choice role as Connor’s personal chef. And there is also a dick joke to possibly top all dick jokes.

All this is lovingly documented by a ubiquitous (and unseen) camera crew, who follow Connor as he launches his second album. An ill-advised U2-esque marketing strategy (putting his new single in refrigerators and other appliances throughout the country) backfires badly and Connor goes from beloved pop star to pariah. All his gimmicky attempts to regain his fans only make the situation worse and soon his manager (Tim Meadows, who almost steals the movie as another singing has-been), leaves him for the hot new rapper Hunter the Hungry (Chris Redd).

Connor’s songs are all hilariously, howlingly awful: He sings about everything from Bin Laden to gay rights in equally offensive measure, rivaling Aldous Snow’s (Russel Brand’s similarly over-the-top rock star in Get Him to the Greek) cringe-incuding “African Child.”

The big finale at the “Poppy Awards” is also hilariously too much and while the song itself disappoints, the all-star presentation is not that far off from recent Emmy spectaculars. Stay tuned for the end-credits song “Legalize It,” in which Connor sings about how he accidentally got addicted to crack.

How funny is this movie? The audience walked out of the theater still laughing and I was still chuckling to myself on the drive home and even the next day. It’s a joyously silly, unbelievably dumb comedy that’s nearly on par with Rob Reiner’s cult mockumentary that started it all, This is Spinal Tap.