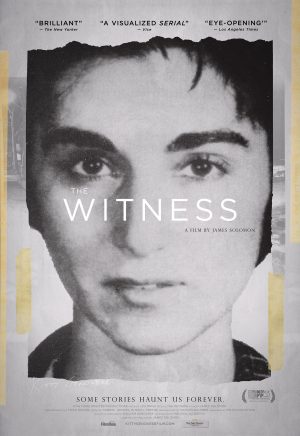 Everyone knows the tragic story of Kitty Genovese: The pretty 28-year-old New Yorker who was brutally stabbed to death in 1964, as, The New York Times sensationally put it at the time, “For more than half an hour… 38 respectable, law-abiding citizens… watched a killer stalk and stab a woman in three separate attacks.”

The case became a nationwide indictment on the apathy of modern urban society and on these 38 particular New Yorkers who – it seems – literally stood by and let a young woman die while they did nothing.

Decades later, it was cited in psychology books as the definitive case of “bystander effect,” when people choose not to intervene, whether out of fear, indifference, confusion or ignorance.

Of course, the murder was far more than just a crime statistic or textbook example: It was utterly devastating to Kitty’s family, particularly younger brother Bill, who was only 16 when she was killed, as we learn in this incredibly moving and eye-opening documentary.

The shocking apathy of Kitty’s supposed friends and neighbors inspired Bill to enlist in the Marines when his fellow teens were trying to avoid the draft. He lost his legs there and the poignancy of seeing him arduously navigate the stairs to her old walk-up apartment is just as heartbreaking, in its own way, as the reason for his dogged quest.

Starting in 2004, the 40th anniversary of Kitty’s slaying, filmmaker James Solomon began following Bill Genovese as he tried to track down the remaining witnesses. The film has taken 11 years to make and now debuts on the heels of the death of Kitty’s murderer, whose identity has rightly been overshadowed by his more famous victim.

While Bill finds that instances of the notorious apathy are all too true, he also finds a surprisingly unknown moment of compassion. The trial was so painful for the family that they did not attend, so Bill learns only by reading court transcripts that one of Kitty’s best friends, a neighbor, ran to Kitty’s aid, too late, as she was already dying.

While there is ample archival footage, interviews and photos, the film adds hand-drawn schematics to show where each witness was at the time of the attack, trying to recreate that night moment by moment. Could Kitty have been saved? What did her neighbors really see or hear?

For every detail that Bill verifies – one neighbor did yell out to the attacker, who fled, but then came back to continue the attack in a different location – he finds just as many that are lies compounded by myth.

That New York Times intro, for instance. The police report notes that of the 38 witnesses they spoke to, perhaps only a handful actually saw anything: The others, for the most part, only heard screaming, looked out the window, and, seeing nothing, went back to bed. Some of the people Bill meets with had no idea they were included among the infamous 38, they considered their involvement in the case to be so minimal.

Bill meets with numerous reporters, including the late Mike Wallace, to ask if anyone questioned the story of 38 indifferent witnesses, none of whom ever called the police.

He finds that no one dared challenged the unassailably respected New York Times, even when a reporter from a rival paper was told that the far more prosaic truth – that only a handful of witnesses saw or fully realized what was going on – “would have ruined the story.” And so the essential truth of the story was swept aside for a sensational headline that would go to become an undisputed legend.

Fifty years later, it’s impossible to know the entire truth. Almost all of the witnesses have died. One surviving witness swears to Bill that she did call the police and was told that several people had already called, contradicting the Times story that no one had done a thing. And yet, Bill can’t find a record of her call in the police logs. Was the woman lying? Mistaken? Or did the police simply fall to log the call? We’ll never know.

Bill’s surviving siblings understandably take issue with his digging up the past. “Who cares who saw what, who heard what?” says his older brother. “She’s dead.” The next generation, Bill’s children and nieces and nephews, have – like the rest of the public – grown up knowing only of Kitty’s famous death and nothing about her life.

Thanks to home movies and photos, she comes back to glorious life as a “class cut-up,” a bold free spirit whom everyone wanted to befriend. When the rest of the family moved to New Canaan, CT, she opted to stay in New York City for reasons that become clear in the documentary. Bill realizes that he and his family barely knew his sister before she was taken from them.

He attempts to meet with her murderer – who had brutally raped and murdered a woman just two weeks before killing Kitty – and (in an incredibly tense scene) the man’s family, who incorrectly believe that Kitty provoked her attacker with racial slurs and that she was part of the infamous Genovese New York crime family.

As Bill works through the multiple myths and misconceptions, he’s not sure he’ll know where to stop. He goes so far as to enlist a young lookalike to recreate Kitty’s 3 a.m. screams for help on the spot where she was attacked. He’d previously posted notices to residents (that we don’t get to read), so it’s no surprise that no lights come on and no one comes to the many windows facing the street as the woman utters scream after heart-wrenching scream. And yet, it seems as if Bill is still hoping someone will come to at least one of the windows.

Or he’s simply never stopped wishing someone had done more that fateful night in 1964.

So many years later, does it matter exactly who saw what or who did what, as Bill’s brother asks? Of course it does, even though we’ll never know all the details of that night, but this film gets as close to the truth as seems humanly possible. It redefines the case and helps restore an identity to a long-lost victim.

Ultimately, Kitty Genovese is as much about the media’s need to sensationalize as much as it is about the craven apathy of bystanders.

Kitty’s shocking murder (and the lack of reaction) helped usher in the 911 emergency call system and community policing groups like The Guardian Angels. And, hopefully, forever shamed people who “just don’t want to get involved.”

The Witness premiered at the 2015 New York Film Festival and opened theatrically in New York on June 3. It opens in Los Angeles on June 17 and will open later in limited release nationwide.