After flicking through any recent scientific journal, you will soon identify something that is quite remarkable. Even in the 21st Century, physicists are still arguing over the nature of time. They cannot quite agree as to why it should move only forward, why it progresses at a set pace (at least, to our limited perception), or why you can’t simply skip forward, or take a trip back in history. The mathematics don’t quite fit.

The tantalising possibility of time being different to how we imagine it therefore very much exists.

As an author, I often find myself puzzling over the questions of ‘what if?’… and there doesn’t come anything bigger than time travel. The potential story-telling aspects of this device have been explored across a number of different formats, and I’ve picked out just a few here to illustrate what I love about the time travel genre: limiting myself to one book, one play, one TV show and one movie!

Play: I was lucky enough to be brought up near Scarborough, England, and regularly visited the Stephen Joseph Theatre in which Alan Ayckbourn premiered most of his plays. I think it’s fair to say that Ayckbourn is best known for his very funny comedies of misunderstandings and farce. But there is also the occasional streak of science fiction and fantasy in his work that is always superbly executed. His 1994 play, Communicating Doors, imagined what would happen if a woman fled through a hotel doorway and found herself twenty years in the past. Only to be then hunted in both eras by her assailant. I’ve seen the play twice – twenty years apart – and still don’t understand why it hasn’t been made into a TV drama. Funny, clever – and with enough shocks to make an entire audience leap from their seats!

TV Show: So the TV show has to be Doctor Who right? After all, what bigger concept is there than all time and space! But I’m not going to, much as I love it. And although seriously tempted by including TV comedy Goodnight, Sweetheart, I’m instead going to pick out Life on Mars. The show was remade for the States – which I’ve not seen – but the UK version had a cop being transported back in time after being involved in an accident. The plot revolves around him trying to get back to his own time; however, the most interesting aspect for me is how the show explores the differences between the 1970s and present day. It’s easy to forget how little actual distance has passed between these dates – and how much has changed! The old saying about the ‘past being a foreign country’ just goes to show how alien it would be to travel back further in time than just a few decades.

Movie: There’s been any number of great time travel movies, especially in recent years. The one I’m going to highlight here though is Back to the Future…Part II. Now, I know that the original is the superior film, but I like the ambition of its sequel in ramping up and playing around with the potential of time travel. For instance, it gives us a vision of the future (some right: video calls, wearable tech; others wrong: continued use of fax machine, and the number of Jaws sequels – though, to be fair, the Fast and Furious franchise is getting there!) We also get a very clever sequence where the characters go back into the events of the first film – before capping off with a call for help from the distant past. All in all, a great film in a brilliant trilogy.

Computer Game: I used to spend hours playing video games. Sadly, my thumbs no longer work at the required pace for the modern controller (I mean, seriously – what happened to a joystick with just two buttons! ‘A’ and ‘B’, that’s all we need!) but I do have fond memories of playing a game called Day of the Tentacle. This adventure game saw players try to defeat the despicable Purple Tentacle by having characters being sent back in time. Interestingly though, not all the characters are in the same era – and actions of those in the past directly impact on the future as the various puzzles are solved – including one in which the player has to change the American Constitution! Most of all though, this game was funny and down-right entertaining.

Book: Choosing just one book about time travel is perhaps the hardest because it’s the format that has had the most opportunity to muse on the subject. Most famous, are HG Wells’ The Time Machine and A Connecticut Yankee in King Arthur’s Court by Mark Twain. I’m going to pick out a recent book though – Audrey Niffenegger’s The Time Traveller’s Wife for a number of reasons. Firstly, it follows a seemingly growing trend of core science fiction ideas being picked up on by non-genre writers; probably because science and tech are now moving so fast that near future SF is becoming increasingly hard to write! Secondly though, it explores in greater detail than most the impact of these stories on characters that aren’t lucky (or unlucky!) enough to be affected directly by the novel’s main premise. The Time Traveller’s Wife is not moving through time; she sees her husband only when he appears, and often in the wrong order.

So those are my picks! 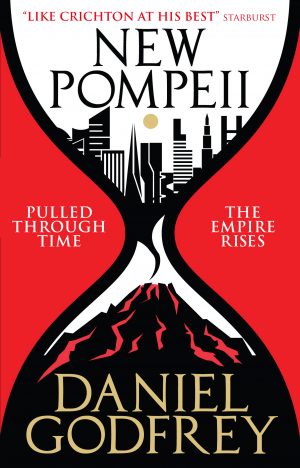 About The Author: Daniel Godfrey has had several short stories published, including in My Weekly and Writers’ Forum, and is a dedicated reader of SF and historical fiction.

He studied geography at Emmanuel College, Cambridge, and gained an MSc from Leeds in transport planning. He lives in Derbyshire.

About New Pompeii: Some time in the near future, energy giant NovusPart has developed technology to transport people from the past to the present day, and they have just moved the lost population of Pompeii to a replica city.
Historian Nick Houghton is brought in to study the Romans, but he soon realises that NovusPart are underestimating their captives. The Romans may be ignorant of modern technology, but they once ruled an empire. The stage is set for the ultimate clash of cultures…

New Pompeii is available now from bookstores and e-tailers