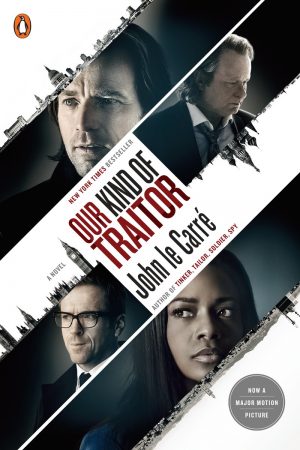 While on holiday in Marrakech, an ordinary English couple, Perry (Ewan McGregor) and Gail (Naomie Harris), befriend a flamboyant and charismatic Russian, Dima (Stellan Skarsgård), who unbeknownst to them is a kingpin money launderer for the Russian mafia.

When Dima asks for their help to deliver classified information to the British Secret Services, Perry and Gail get caught in a dangerous world of international espionage and dirty politics.

The couple is propelled on a perilous journey through Paris and Bern, a safe house in the French Alps, to the murky corners of the City of London and an alliance with the British Government via a ruthless and determined MI6 agent (Damian Lewis).

And to celebrate the release of the film, we’re giving away five copies of le Carré’s book to FOG! readers!

To enter, please send an email with the subject header “Our Kind of Traitor” to geekcontest @ gmail dot com and answer the following: