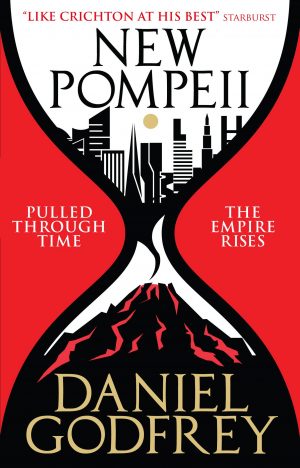 Some time in the near future, energy giant NovusPart develops technology with an unexpected side-effect: it can transport objects and people from deep in the past to the present day.

For post-grad historian Nick Houghton, the controversy surrounding the programme matters less than the opportunity the company offers him. NovusPart’s executives reveal their biggest secret: they have saved most of the people from Pompeii, minutes before the volcanic eruption. Somewhere in central Asia, far from prying eyes, the company has built a replica of the city. In it are thousands of real Romans. And Nick has been chosen to study them.

But Nick soon realises that NovusPart are underestimating their captives. The Romans may be ignorant of modern technology – for now – but city boss Manius Barbatus wasn’t appointed by the emperor because he was soft. The stage is set for the ultimate clash of cultures in which time itself is a weapon…

Find out for yourself, because thanks to our friends at Titan Books, we’re giving away two copies!

To enter, please send an email with the subject header “NEW POMPEII” to geekcontest @ gmail dot com and answer the following:

What year was Pompeii wiped out by Mt. Vesuvius?