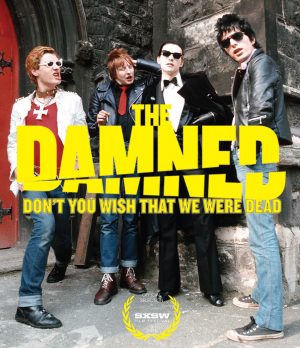 From “Lemmy” filmmaker Wes Orshoski comes the story of the long-ignored pioneers of punk: The Damned, the first U.K. punks on wax and the first to cross the Atlantic.

“THE DAMNED: Don’t You Wish That We Were Dead” includes appearances from Chrissie Hynde, Mick Jones (The Clash), Lemmy and members of Pink Floyd, Black Flag, Depeche Mode, the Sex Pistols, Blondie, Buzzcocks, and more.

Shot around the globe over three years, the film charts the band’s complex history and infighting.

To enter, please send an email with the subject header “THE DAMNED” to geekcontest @ gmail dot com and answer the following:

In 1984 The Damned made a live appearance on this British cult-tv series about the squalid house where four undergraduate students lived during their time at Scumbag College?