It’s almost inevitable that you’ll end up touching upon the subject of addiction if you write about broken worlds and people on the edges of society. Those bereft of escape routes. Some isolated by choice, others by circumstance. Some isolated even amongst friends. Foon Gung is a perfect storm of horror and hopelessness. Fail and you’re left to fall or fly on your own, Pass and you’re still enslaved, constricted, oppressed. There are very few ways to win.

Shock Pao is definitely not a winner. He’s what most people think of when they think the word addict. Someone with potential who’s pissed it all away. His entire life revolves around his next fix, and though he can’t admit it at the beginning of the book, a good deal of the worst choices he’s made arise from a need to numb. He’s smothering pain. Self-medicating against a toxic slew of mental trauma and bodily agony accrued from a childhood spent living in the wrong body, bullied and judged. Deeply wounded and failed by those who should have protected him.

He’s a bit of an anti-hero. Maybe we judge him, his bad choices, but we also have some sympathy for him once we’ve seen his pain. Seen how much he longs for peace, for healing. We tut and scoff at his choices, his stupidity, yet still we cheer for him. We don’t want him to give up. We want to see him become his better self. We can root for this addict. He’s easy to care for in so many ways. He’s even a touch endearing.
Amiga is an addict of a different stripe. Less sympathetic. Easier to judge, despite her wounds and obvious pain, because she’s not what we expect––from a woman or an addict. We gaze at her askance for her addiction to the darkness in her life. To being Twist’s bloody hands. Though it brings her horror, shames her, torments her, twists her into moral pretzels so tight she can only untangle them by dousing them in alcohol, she chooses the dark over everything. Chooses the blood on her hands over ever being clean. It makes her hard to like.

Why does she cling to what she hates, terrified she’ll be nothing without it, even as she’s petrified of being nothing because of it? It’s the nature of addiction. It is compulsive. Absolute. Lives in the pulse like a drumbeat. Hollows the head with inescapable thoughts. Like Shock, Amiga seeks to be numb, seeks oblivion––obliteration of the self. She loathed herself before she began to kill. Killing only confirmed all the bad things she believed about herself already and so she is unable to give it up, wanting to believe the worst.

She too has made some of her most awful choices from a place of needing to chase her addiction. And no one can force her to change that, not even her friends the Hornets, who genuinely care for her, who despair of her sinking ever deeper and being lost. All they can do is continue to care, continue to be there, and hope that one day she will make better choices. That’s the horror of addiction. Only the addict can choose to get clean. Or quit being a Cleaner.

Addicts are on the run: from feeling, from thinking, from having to be. It’s a form of sensory drowning, using one thing or another to plunge deep underwater where nothing can find them: no sound, no fury, only blessed quiet and the safe pressure of almost dying, of not quite ever living. Immersing themselves away from the world, from their own minds. The latter most of all.

Which is why addicts have to hit rock bottom before they find the will to fight. But the sad fact is this––some will hit it and never come back, and others hit it time and again, only to slide back down. It’s not as easy as hitting it once and clawing back out. In the end, it all depends on what they’re running from, how desperately they want to keep running, and whether or not there’s anything better to run toward. Only the addict can decide, and they may make the wrong decision time and again, because sometimes it’s easier to drown––even if you’re desperate for air. 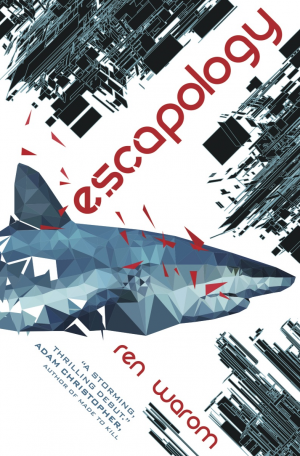 About The Author:  Ren Warom lives in the West Midlands with her three children, innumerable cats, a very friendly corn snake, and far, far too many books. She haunts Twitter as @RenWarom, and can be found on her YouTube channel talking about mental health issues and, of course, books.

About Escapology: Shock Pao is not just any Haunt—he’s the best. There isn’t a system that he can’t crack into, no virtual lock he can’t pick, nothing he can’t steal for the right price. Outside virtual world the Slip, though, he’s a Fail—no degree, no job, no affiliations to protect him from angry ex-customers. Of which he has quite a few. So when his ex brings Shock a job which could help him escape his miserable existence, he accepts, little realizing that it will turn out to be his most impossible, illegal and incredible assignment yet.

Amiga works for Twist Calhoun, one of the toughest crime lords in the Gung, as a Cleaner—assassin. Trapped in a world of kill-or-be-killed, she wants out. But when Shock’s war comes to her, she doesn’t have a choice: it’s her job to bring him to Twist, dead or alive—or it’ll be her head in a bag in Twist’s vault.

Escapology is available now from bookstores and e-tailers