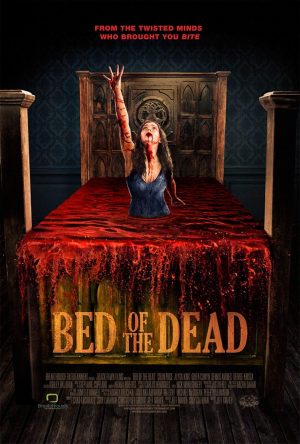 Ren (Dennis Andres) has decided that, for his birthday, he wants to go to a sex club with his girlfriend to meet up with his best friend and his girlfriend (who performs at the club) to have a foursome in one of the rooms there.

Unfortunately, while he was told on the phone there were rooms available, it turns out the club’s rooms are all booked. After some pleading (and greasing the wheels), they secure a room to live out Ren’s birthday fantasies.  Unfortunately, there was a reason the clerk was so hesitant to rent out Room 18: she had been told in no uncertain terms that the room is under renovation and should not be rented out.

For the antique bed in Room 18 kills people. Yep, the title ain’t foolin’; the villain of this horror piece is a killer bed.

As singular as this may sound, the premise of Bed of the Dead is not unique.  Of course, one could argue Johnny Depp’s death scene in A Nightmare on Elm Street is the result of a killer bed, but true cult film nerds may recall a film titled Death Bed: The Bed That Eats.  Yes, the 1977 film from writer/director George Barry is, as far as I’m aware, the first – and until now only — film that is about a killer bed.

The interesting thing about Barry’s film is, initially of course, its oddball premise. But while I don’t think it’s the classic some of its fans make it out to be, it’s pretty outrageous and finds many bizarre, intriguing aspects to the situation beyond the obvious.  Also, Barry attacks the premise with a healthy sense of humor; after all, it’s about a killer bed!

Director/co-writer Jeff Maher has far more serious fish to fry in Bed of the Dead, and the film suffers for it. Once the foursome realizes that they are indeed sleeping on a bed that wants to kill them, they discover that they’ll be killed if they get OFF the bed.  While that is an interesting twist, it also limits physical activity quite a bit, and viewer fatigue does set in after a while.

Smartly, Maher cuts back and forth between the folks trapped on the bed and a cop investigating the aftermath of a fire at the club hours after the main action taking place.  There is a clever idea that the bed-trapped kids are able to speak to the cop on the phone, even though they are existing two hours prior to the cop’s timeline.

The problem is that (not to beat a dead horse) the movie is about a killer bed, so playing it straight maybe wasn’t such a great idea. Perhaps Maher was hoping to subvert expectations, with his title and premise, and actually attempt to create sympathetic characters and genuine scares.

There are certainly some good jump scares, but several stabs at creepiness and suspense fall flat.  There is an embarrassing sequence that flat-out rips off The Grudge and Ringu, and the kills are never frightening.  None of the characters are especially fascinating, though Alysa King’s Sandy has an interesting back story, and the cop, played by Colin Price, develops a modicum of sympathy as well.

The revelation of the bed’s motivations (yes, I just wrote that) is fairly ho-hum, though it does build to a pretty decent climax.

Bed of the Dead is far from a bad film; it starts off feeling like second-tier, late-80s Italian horror (this is a compliment), then veers into fairly standard VOD territory, then bounces back intermittently with some clever ideas and scenes.

It just isn’t very scary or well-paced (even at 88 minutes, it feels long, especially in the second act) and doesn’t really capitalize on the loony premise. If you call your movie Bed of the Dead, you really, really should go for broke.  Maher has indeed made a competent, watchable film, but he and co-writer Cody Calahan missed a good opportunity here.

Bed of The Dead will screen at the Fantasia International Film Festival in Montreal on August 1st at 5:00pm, at the J.A. De Seve Theatre.