I’m still decompressing from Comic-Con and learned the best way to do it? 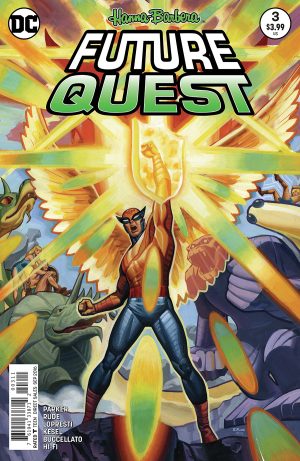 The weirdest thing to come about DC’s new direction…hell the weirdest thing going on in comics in general is the relaunch of these Hanna Barbera properties. It’s just strangely nuts. And not in a good way.

The bright spot is Future Quest. This book stands out as being pretty damn great. Jeff Parker writes with a fun sensibility and knows these characters. He just writes a good book. This issue focuses on Birdman and it’s fun, it’s well told, and it pops. Thumbs up to the writing.

The biggest selling point is having Steve “The Dude” Rude drawing this. Rude is one of the best artists this medium has ever had, and he’s just awesome. The art sings and it’s beautiful to look at. It’s great storytelling and I love his work. This is a good book.

Pick this up. It’ll remind you both how comics can be good…and how the other titles in this line are just out of their mind. 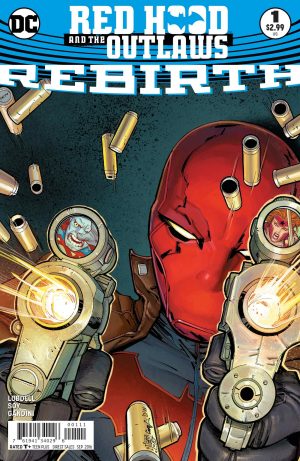 Red Hood and the Outlaws: Rebirth #1

This is a step in the right direction. I was not looking forward to this book at all yet it’s a pretty well told story. I know that it’s just a recap issue but it actually works pretty well. I enjoyed it enough to be interested to see where it goes.

This book focuses on the Jason Todd Red Hood and it’s actually interesting. I attribute that to Scott Lobdell. He puts in a great opening scene and I was immediately hooked.

Lobdell, who hasn’t been this interesting in years, just gives the Red Hood a hell of a personality. He gives the book a verve I wasn’t expecting and it’s wild and a tad sick. The last line of the book was especially powerful. Good story.

Soy gives the book a great look. He’s a fairly good artist and I enjoy his storytelling. He and Lodbell make a good team and I’m in. Let’s see where this one goes. 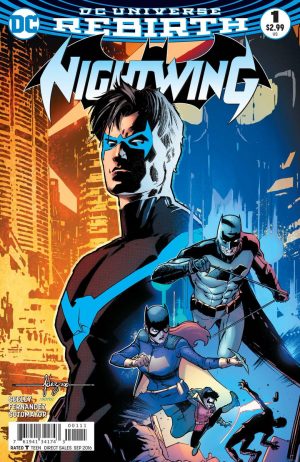 Ladies and gentlemen, we are back to the B- rating. Only for a brief time, however. Here we are, issue one of the new Nightwing book.

Nightwing is back in a solo series and instantly the title “Better than Batman” turned me off. If you are going to give me that title, give me a great book. I’m not sure Seeley has a handle on Nightwing. He paints broad strokes but I feel like I know him less after reading this book. And Fernandez isn’t a bad artist. I just wish he was on anything but this. The character at the end Raptor give the book a bit of a jolt. I then started paying attention more as they fought. Up til then, though it’s a snooze.

Nightwing used to have a good book. I want that book back. Not this. Books are supposed to advance the character. This one doesn’t. Maybe that will change. So far, I’m hoping so. 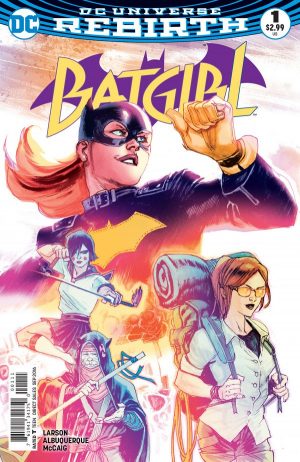 Now THIS is what I am talking about! Batgirl #1 demonstrates what the whole Rebirth line could be like. This is a standout amongst the group. Hope Larson writes Bargirl so wonderfully right from the get go that I was hooked instantly.

This story finds Batgirl on an adventure much different than anything I have seen previously. And it works. It’s natural, smart, vibrant. I loved it. What an interesting choice Larson is to write this. Even better that it works. The cherry on top of it all is the art by Albuquerque. He’s come along so much. His work on Huck was stunning. This may even be better.

Batgirl is going to be at the top of my reading list. This is the type of book DC should be doing. Well worth the money and highly recommended. 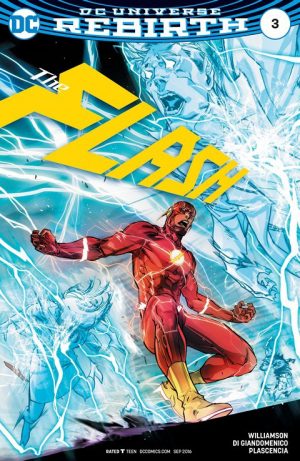 Man, this is the DC I know and love. The Flash has been a shining star for the DC Rebirth line. Williamson has created one amazing story for the Flash.

Dozens of people have now gained super speed. Not all of them are heroic however. So it comes down to the Flash and August to try to stop them. Fun ensues. Williamson is a great writer for the Flash. I’m not sure yet what his overall plan is…and that is a good thing. And I like that. It’s solid.

The art is pretty well done too as I have said before and it’s the same artist from issue to issue thus far. I like this. This is a good book from start to finish and it’s building to something. I’m glad this is on the stands. 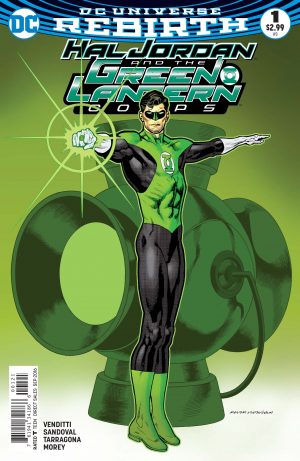 This issue was better than the previous one I can tell you that much. Still, it feels rather generic and I wish it felt like their was an overall plan in place.

This issue shows Hal going up against Sinestro. That’s great and all but nothing new is done here. It’s just extremely standard. And that’s the problem. I feel like we have been down this road before. Venditti doesn’t write a terrible story. Just one that we know the beats of. I actually am starting to root for Sinestro to win…Hal has become so boring.

The arts is passable on this. Not terrible but not inspiring. What we are left with is a competent book that feels like it could be better. Because it could. These guys have some talent. Let’s see it. 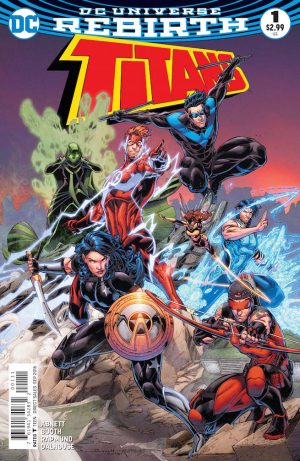 Wally West is back! And not a moment too soon. We have all missed Wally very much. And this issue of Teen Titans focuses on that. It starts off pretty good. But that is mostly because of the art.

Brett Booth has an energy with his style that is hard for me to pass up. Even in the worst book, his style would stand out (see his first Image work). There is a charm to it that not many have. So this story he’s working with isn’t bad. Abnett is not my favorite writer but it’s an okay tale. Still, Booth elevates it. I was instantly more into it because he is there.

It feels like anyone could be writing this story…not to say it doesn’t have it’s charms. But besides the art there’s not a lot to grab onto. I want something classic rather than disposable. I say trash this book and put Booth on Batman with Tom King. That might be the perfect blending we haven’t seen yet. 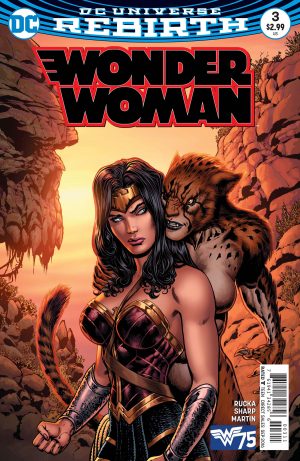 Currently, Wonder Woman is one of the most annoying books being produced right now. Different continuing stories every two weeks. It’s a lot to ask and I wish DC would recognize this and give us a break.

We are in the Wonder Woman Year One phase of the book…and it’s okay. Rucka tells us a good story and it’s good enough to make you want to read more. Sharp isn’t bad on art either. There’s just not a lot of consistency from issue to issue and you were there was.

My advice? Finish one story and then show us the next rather than this fits and starts nonsense. It’s terribly annoying for an otherwise decent enough book. 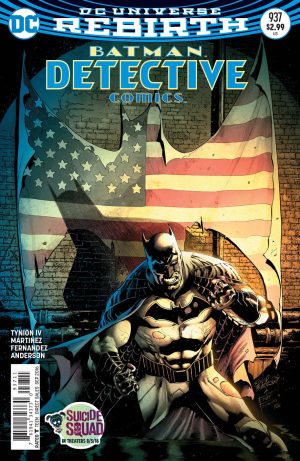 All right. I am tired of Detective Comics now. There is not a lot for me to grab and I’m rather bored with it.

I understand Batman is forming a team and they are in the midst of war. But who cares.

Tynion writes in broad strokes and I have a hard time caring about anyone here. It just seems a lot of hubbub now for a caper that Batman could most likely handle himself in normal circumstances.

The writing is bland on this and the art is bland. So guess what we all get? You guessed it. Bland. It’s a shame though. I wish Tynion would have dug deeper to make a hard storyline that you couldn’t put down. Instead we got this. Maybe they should let the title be once a month to give the guy to explore his ideas and BREATHE.

The art doesn’t help much. What we are left with is a dull storyline, bland art, and something you can’t wait to put down. 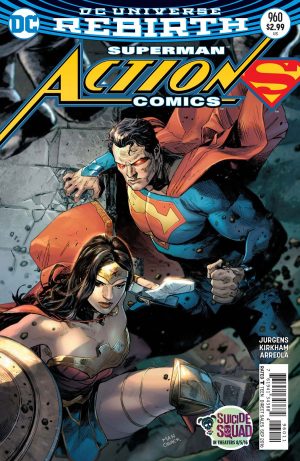 So here we are. Part four of the Doomsday storyline nobody asked for. And it’s just a mess of a confusion of a mess.

Jurgens writes the best story he can on this. Sadly, We have been through all this before. And now we are just getting diminishing returns. Doomsday is back and nobody is excited. It’s truly hard to watch because Jurgens thinks he’s writing a more compelling tale than he is. Superman is a hard character to crack. But give me something I can’t live without. I always hope for that.

The art isn’t too bad…still these two don’t know how to work together yet. What we are left with is a hope. A hope that the next story arc is better. I hope so.

The Superman character is classic for a reason. He deserves good stories too. This isn’t that. 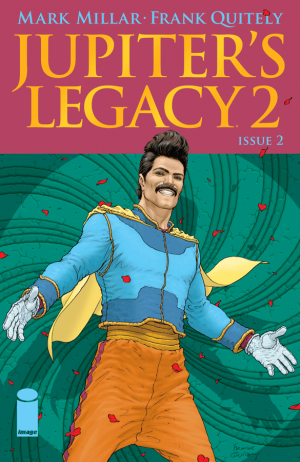 This book proves that good things come to those who wait.

Well, we waited well over a year for this book. And it doesn’t disappoint. The first issue was great and this continues with that. This may indeed may be the best title Millar has written.

This issue shows our heroes face off against Japanese villain Raikou. It is rather a crazy story to be honest. But I love it. Millar knows how to balance action, suspense, humor, and storytelling in such a way you are never lost or forget where you are. Compound that with Quitely’s art which is off the charts. I would say that this is his best work but Pax Americana is tough to beat. Still his art wows at every turn and is very unique.