We are back to reviewing the DC Rebirth relaunch and boy are they hit or miss. 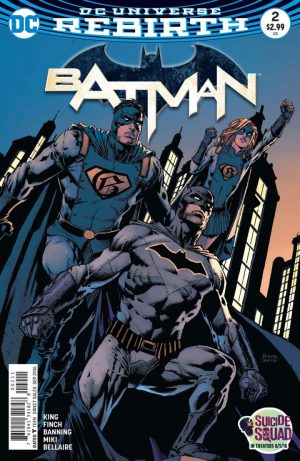 To me, this is the biggest disappointment thus far for the Rebirth line as it held promise. Sadly, It never delivered on it. It’s actually not a half bad comic book but it’s just kind of dull.

The art on this is pretty vibrant. Finch really has a sharp style that grabs the eye and doesn’t let go. It’s good.

However, it seems they can never fit him with the right writer. Like ever. I don’t know what it is. This is not different. His art moves and I like his take on the various Batman characters.

But the story just doesn’t grab you.

King doesn’t really have a good handle on Batman or Bruce Wayne or any of the characters really. He’s kind of trading water. While this is an improvement over last issue, it’s not enough to make a difference in my mind. Gotham and Gotham Girl are two new characters who bore me to tears. Rumor had it they were Nite Owl and Silk Spectre from Watchmen. If they are not, then they are two of the lamest characters to be introduced. Who cares? Some of the elements are nice…but they don’t add up to much of a whole.

The thing I will say it’s getting harder to write anything original with Batman in it. And this is an okay book. But we deserve better than okay. I hope this picks up. It has potential to. Make it happen. 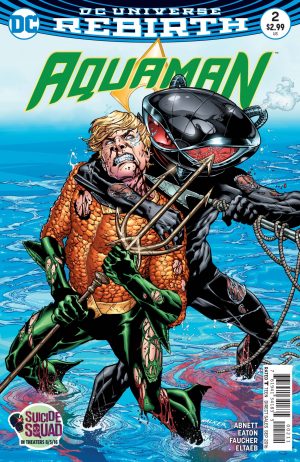 I liked the first issue enough mostly because of the Brad Walker art. One issue in and we get the serviceable Scot Eaton. I have never been an Eaton fan. He’s not a bad artist. I really like him on the Valiant titles. But when he’s on mainstream superheroes it’s always half inspired.

But man, the story doesn’t help.

I have been trying to be kinder to writers like Dan Abnett. That being said I wish there was a stronger direction for this title. It’s just sinning it’s wheels and feels like the early 1980’s and nothing special is going on.

Why? Give me an Aquaman that makes me sit up and makes me want to pick it up. It’s not this.

I hope they get inspired and make a classic book. Doesn’t seem likely. But I hope it happens. 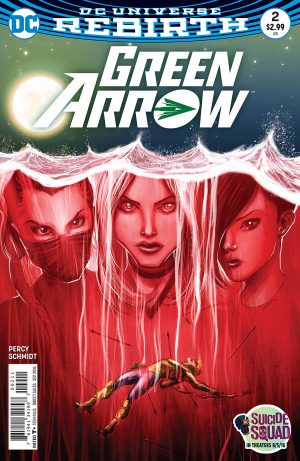 Green Arrow has emerged as one of the better titles that has come from this Rebirth reboot. It’s not without it’s flaws but it’s a solid book in a line that hasn’t impressed thus far.

What I like about this book it that it’s the Oliver Queen I remember.

Not a “take” on him, not a younger version, just him. And it works. Percy writes him very well. The art by Schmidt is a little too cartoony than I usually like. But here it works.

It’s damn enjoyable. And what more do you need?

I’ll be picking up Green Arrow because I’m curious to see where it goes. It seems to have a plan in place. Let’s see what happens! So far I like it. Keep it coming! 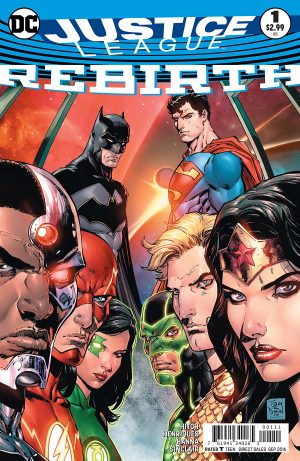 Written and Illustrated by Bryan Hitch
Published by DC Comics

Bryan Hitch seems to be the Zack Snyder of the DC publishing world. If at first you don’t succeed, here’s another chance.

They didn’t even let Hitch finish his previous JLA title. Not that anyone really cares it seems. Because Poof! Here’s a new one. Doing the same stuff the previous one did.

Hitch is one of the best artists of the last 15 years. His work is generally good. Since he took on Justice League, he’s insisted on writing. And I’m not sure how much of a good move that is. The writing is very basic. And I mean BASIC. And the art, while good, isn’t as good as most of his previous work. The whole endeavor seems very lackluster.

The good thing about the book is that the heroes aren’t very dark. The bad things is that nothing seems to be at stake. It’s a shame. Another book that is just “Okay.” We deserve better than that. And so does Hitch.

Hire a writer and focus on the art. This could be great. 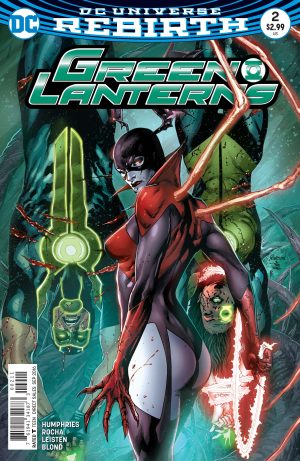 I decided to finish up with the latest Green Lantern offering. It ain’t half bad. It’s a comic I can see building and working. Right now it’s fairly good but I want to see more of the scope. I am interested, so that’s more than most.

Humphries seems to write with an epic in mind. At least I hope so. I can see it backfiring. But I hope it doesn’t. It’s nice to see a book without Hal Jordan working.

It’s nice, fun, and it moves quicker than any DC title presently. Rocha is a find. The art is well done and works great.

DC Rebirth promised us some sort of Watchmen tie in. I am getting more and more impatient with it waiting for clues. Geoff Johns likes to create a long storyline and I can appreciate that. We could be waiting for five years before any answers. Give us some better stories while we wait. Or show us what you have in mind soon. Green Lanterns is a good enough book. Is there a larger picture in mind however/ Not sure yet. 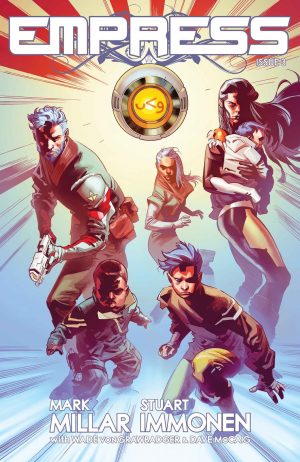 Sure, I liked his grim and gritty stuff. But beyond just taking genre’s and turning them on their head, the man can actually WRITE.

This is certainly apparent on his book Empress. This book focuses more on character and storytelling. And just the joy of creating comics.

Empress is a story of a galactic dictator who takes her kids and leaves her evil husband. It’s wild. And fun. And has heart.

Millar puts passion into every comic and he clearly loves what he does. It shows. This is a book that I started off liking and just fell for. It’s awesome. The art is the best of Immonen’s career.

I love that Millar takes an artist and they collaborate to make an amazing, original comic. I hope he continues to do so for many years to come. The comic industry needs more like him.