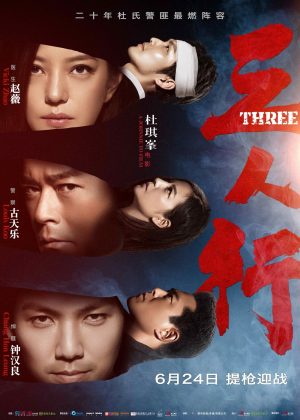 Anytime you encounter a Johnnie To film, you know you are in for a wild, intoxicatingly fun ride, even if the film takes place entirely inside closed walls.

Known particularly for his signature unwaveringly frenzied approach to crime dramas that always include action sequences that leave viewers exhausted, To has traded in his usual highways and streets for hallways and closed rooms with his most recently exported films to the West: Office and Three.

2015’s Office presented a more musical To that expanded his constant flair for theatricality in the mundane or traditionally dramatic, and this year’s Three, which had its Quebec premiere last Friday at Fantasia International Film Festival 2016, gives us a Johnnie To interpretation of a hospital drama and a theater play.

Although Three has a scale far more diminutive than that of 2012’s highly acclaimed Drug War and somewhat stands in the shadows of that film, it does succeed because of its full commitment to its concept: an experiment of three opposing characters who wrestle for power. As indicated by its title, Three builds its unwieldy flesh on top of a triangular frame; Inspector Chen (Louis Koo), Dr. Tong (Wei Zhao), and Shun (Wallace Chung), the injured but amazingly alive criminal, form the three vertices of the frame, and Three documents the attempts of each to form the longest and most dominant edges in the triangle.

To throws us straight into surgery at the beginning of Three, where we meet the uptight, overly confident and righteous Dr. Tong. Today is a normal day of operation and follow up, and Dr. Tong runs her ship tightly with her curt commands and cold demeanor that extend far from the operation room to post-op, where Dr. Tong’s bedside manner with her patients has the same distant tone. From the patients in her care, we get the sense that Dr. Tong’s recent surgeries have not gone so well, and even though she seems confident in her decisions as a doctor, she’s walking straight into a mental breakdown. 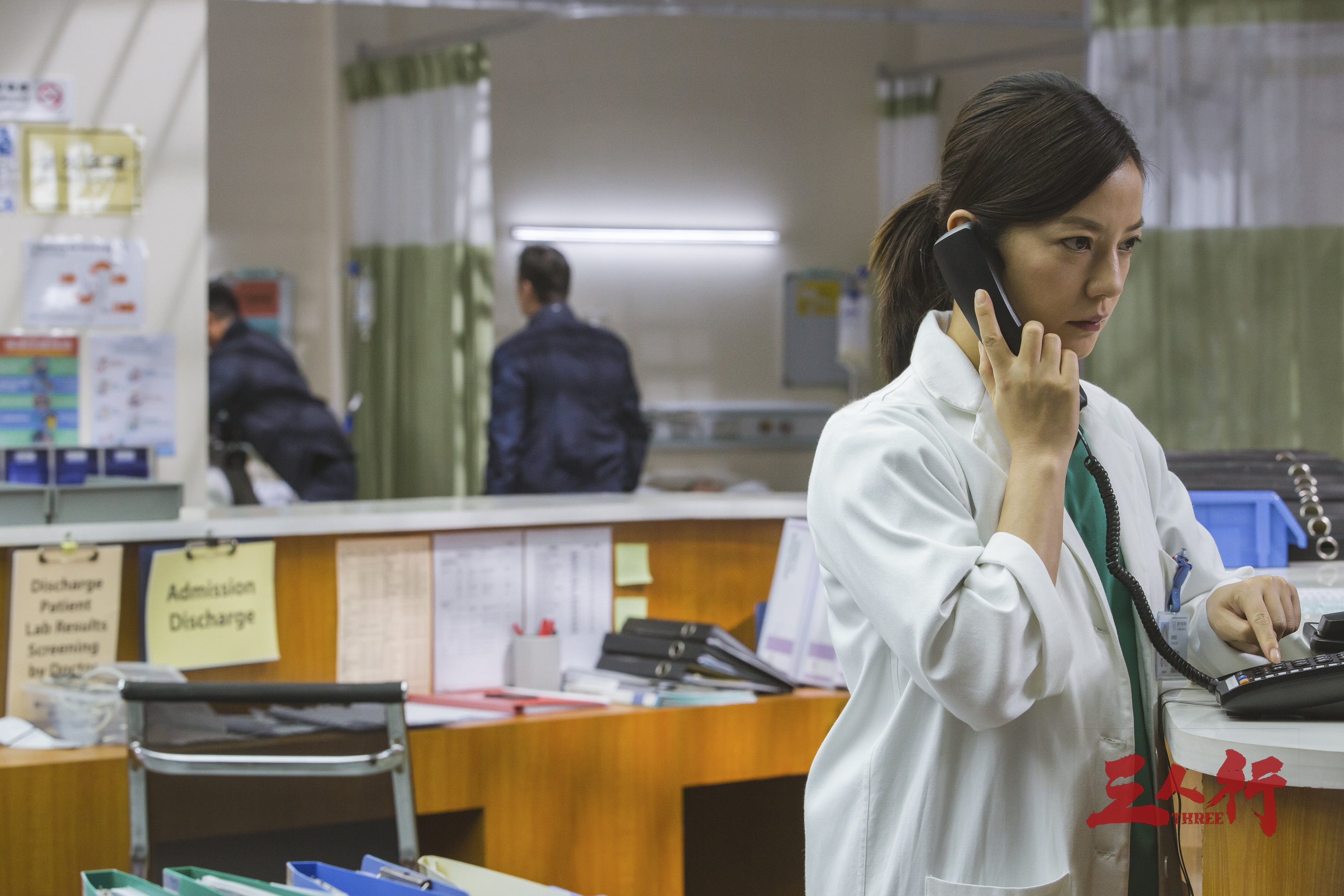 From the recovery room of the bizarre that includes an older overweight man who constantly desires food and a post-surgery paralyzed young man who spits on Dr. Tong for her decision to operate on a spinal tumor rather than treat it with radiation, To cuts straight to an unidentified, unconscious man in a stretcher being wheeled into the hospital by paramedics. From the officer handcuffed to the the man in the stretcher, we quickly know that the patient is a criminal of some sort. In the admissions area, we first meet Inspector Chen, who watches the patient with a suspicious vigilance, hovering over the incapacitated criminal through everything from the initial assessment to the beginning of surgery. Chen’s attention has its reasons; the patient, who we will come to know as Shun, is a victim of the Inspector’s use of excessive force, and if anyone finds out, Chen will lose his job.

When Shun manages to wake in Dr. Tong’s operating room as she and her staff prepare for surgery, he refuses to allow the operation to occur, preferring to keep the bullet lodged in his brain rather than receiving the surgery and remaining unconscious for the rest of the day, beginning the spiral of madness that presses Dr. Tong, Shun, and Inspector Chen against each other. Shun wants to stay alive because his friends have already begun to prepare his escape; Inspector Chen wants Shun quiet (and dead); and, Dr. Tong wants Shun to undergo surgery, which she believes is the best option for him.

Shun taunts Inspector Chen and Dr. Tong, goading each of them into frustration to buy more and more time for his eventual escape and building the magnetic tension that pulls Three together. As expected from To, all of the power struggles culminate in one massive shootout that is tinged with futility as all parties experience severe losses. However, unlike the gunplay in Vengeance and Drug War, the final action sequences in Three have less impact because of their full execution in slow motion. The beauty of To’s signature action choreography is an ebb and flow of way too fast and way too slow, and the closing shootout and explosions of Three, while nice to look at, lose their edge by existing entirely in slow motion. To does cap off the shootout of Three with Inspector Chen and Shun dangling from the walkway of a skyscraper in a way that will make you sweat and cringe, but, overall, the climactic action sequences fall below the high mark of all hospital blowout scenes, Isaac Hayes’s blood-bag-exploding, frenetic shoot-em-up at the closing of Jonathan Kaplan’s Truck Turner.

Despite the slightly disappointing closing action scenes, the path to the end of Three makes all of its eighty-eight minutes worthwhile, with the film’s interplay between the three points in the triangle and everyone around them being the best part and the reason why you should see Three. The peripheral characters to Dr. Tong, Shun, and Inspector Chen bring humor, emotion, drama, and flavors of reality into the film, and Wallace Chung’s performance as Shun, the provoking criminal that knows how to use philosophy and the motivations of people to unbridle them, keeps you attached to the screen. If you look at Three as a staged play rather than an à la Johnnie To action film, then it really does succeed in its task to develop a fight between three forces, and by its end, no one really wins except for Johnnie To himself because he has yet again taken you on a ride that looks like an overwhelmingly entertaining film on its surface but embeds a sense of nihilism and futility in modern Hong Kong under its skin.

Three will screen at the Fantasia International Film Festival in Montreal tonight, July 18th at 5:35pm, at the J.A. De Seve Theatre.