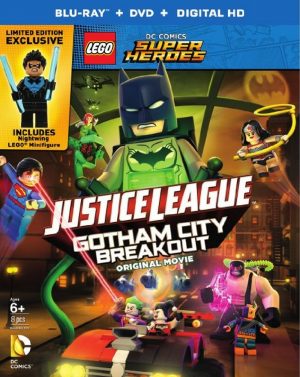 What do you get the guy who has everything (except parents)? An all-expenses vacation of course!

On Batman’s Bat-Birthday, The Justice League and Nightwing celebrate a crime-free Gotham by sending The Dark Knight off on a trip.

With Batgirl and Nightwing by his side, the workaholic heir to the Wayne fortune leaves Superman back home with Robin to keep an eye on the gritty city of Gotham.

The LEGO DC Universe has given us some funny romps so far and this on is no exception. Our Batman (Troy Baker) is as obsessed with Justice and cannot seem to avoid trouble, even on vacation.

He’s only firing at about 80% of the snark and arrogance of The LEGO Movie version by Will Arnett, but like Jackman and Wolverine, it will be hard for LEGO Batman to pry himself too far from that popular characterization.

Nolan North returns as the voice of Superman, fitting for an actor of his caliber.

The movie starts out as a mini-preview of Suicide Squad, pitting the Dynamic Duo against Harley Quinn, Poison Ivy and The Penguin. The round-up ends with a surprise party for Bats in or near Crime Alley. The big surprise — a Bat-Vacation!

Supes is cocky enough to think he can take on the Bat rogues gallery alone but as we find out, sometimes strength can’t beat crazy. And when you are looking for help from Cyborg, you must be in trouble! Robin gets grounded because someone needs to keep an eye on the cave!

From an Arkham Asylum window, Joker sees the LEGO Bat-Plane leave and plans to brick-out of Arkham with his new sidekick. Joker has eschewed his former love Harley for a new side piece, a spoon with a smile drawn on it, Spoonie! By tricking Supes into using his heat vision, Joker unleashes the bad guys on Gotham.

Meanwhile, Bats, Batgirl and Nightwing head to Madam Mantis’ island, a secluded dojo where Batman trained with Deathstroke (John DiMaggio) as a padawan. The schoolboy rivalry manifests itself into a modern day revenge story as Deathstroke targets the vacationing Bat-family in search of Madam Mantis’ “Forbidden Move”.

By teaming up with Bane and an army of Trogowogs (cute Frankenstein mole people, original to this story), Deathstroke keeps Batman busy, but what else would Batman want to do on vacation besides fight for justice?

As Supes, Wonder Woman and Cyborg wrangle the cats that are Poison Ivy, Scarecrow, Penguin, Harley and Joker back behind the walls of Arkham, they get trapped in Poison Ivy’s spell and the only person that can save them is the only kid not allowed to leave the cave after curfew, Robin!

With a Batcyle at the ready, he is able to save the Justice League from certain doom and save the day before Bruce gets home! Superman relents that yes, Batman’s villains are not super-powered, but are just as dangerous as the big monsters he faces!

I love these movies for capturing the essence of the characters, the honest funny moments and an equal celebration of all things Brick and all things DC Comics. This one features LEGO item #630, the Brick Separator. Somehow, Batman hides one of these in his cape after a search, just like magic and is able to break himself out of a prison cell along with Batgirl and Nightwing.

The rotating cast and some returning are great voices for the LEGO League and the story isn’t just for kids. Usually, I get a bit confused in the third act, or that is to say, explaining the third act to others. At a runtime of 1 hour and 18 minutes, there is plenty going on in the action packed and funny story.

My favorite moments are like the Wyldstyle hair spin reveal in The LEGO Movie, when you are gently reminded you are watching toys interact. Spoonie is a key character to the plot, and is just a spoon! The “Forbidden Move” features a familiar piece as the basis for a special effect.

LEGO should be proud of what the team has created here and this LEGO Justice League is one they are really building on.