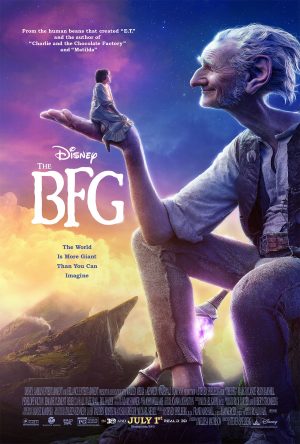 Steven Spielberg’s films over the last 10 years have been hit and miss and, unfortunately, The BFG (which stands for “Big Friendly Giant) is a big miss.

The problem is not in the casting: Newcomer Ruby Barnhill is quite winning and plucky as orphan Sophie and Mark Rylance – who just picked up an Oscar for his extremely understated turn as a Cold War spy in Spielberg’s Bridge of Spies – brings a crinkly warmth and charm to the odd-speaking giant. Ditto Penelope Wilton as Queen Elizabeth, who’s remarkably unsurprised to find herself giving tea to a 24-foot giant.

No, the problem begins about 10 minutes into the film when The BFG spirits Sophie away to Giant Country after she spots him out on his nightly dream-planting rounds in London. I may watch far too much SVU and Forensic Files, but it’s hard not to feel uneasy about a giant man telling a 10-year-old he’s going to keep her with him in his awful cave for the rest of her life. But that nagging concern aside, the film grows tedious by focusing on just these two characters.

True, Sophie hated the orphanage and adjusts quickly to her new surroundings, and The BFG is also clearly in need of a friend as he’s bullied by the other bigger, meaner giants. But their friendship, which is the bulk of the film, is just not that compelling. We’re supposed to ooh and aah as he reluctantly takes her on his nightly hunting rounds for rogue dreams, which are represented by whizzing, multi-colored balls of lights. But the magic Spielberg and John Williams are clearly nudging us to feel throughout this too-long interval just isn’t there.

As for the other giants, well, they might as well have stomped in from that other, much-maligned giant film Jack the Giant Slayer. Where is it written that all giants must be grotesque, dim-witted creatures who enjoy farting and kicking each other in the groin? The film spends entirely too much time in Giant Country. Once he and Sophie determine they’ve got to appeal to the Queen of England to stop the other giants’ murderous ways, the film finally picks up.

Watching The BFG delicately navigating his way through Buckingham Palace and the guards trying to keep their cool is the best part of the film, not to mention everyone, including the Queen and her corgis, partaking in the giant’s “whizzpopping” special drink that results in indecorous, uncontrollable green clouds of fart-bursts. (Giants farting on their own just isn’t as funny.)

I saw the film at Disney’s El Capitan Theatre on Hollywood Blvd, where an old-time organ comes up from beneath the stage before each show and the organist plays medleys of Disney tunes and songs like “Hooray for Hollywood.” It’s a great feature of this theatre, and yet a little bit of the organist pulling out all the stops goes a long way. Several years back, a premiere across the street delayed a film I was there to see for nearly an hour: After 45 minutes of maximum whimsy from the organ, I was about ready to tear my hear out. Listening to The BFG prattle on about  “babblement” and “crockadowndillies,” even in Rylance’s droll delivery, gets old just as fast.

I never read the book, (which Roald Dahl wrote late in his career), but the current edition on Amazon is a mere 224 pages. A nearly two-hours, the film begins to rival Peter Jackson’s outrageous padding of the Hobbit films.

My advice: Unless you’re under 10 and simply adore fart jokes, wait until it’s on cable or DVD and fast-forward to the funny palace scenes.