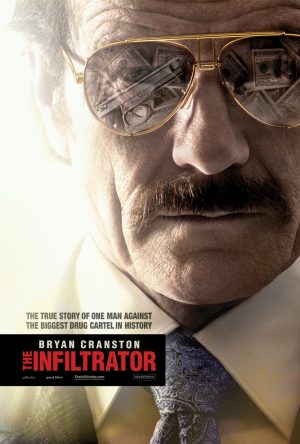 The true story behind The Infiltrator is amazing: A customs official goes undercover as a money launderer and manages to take down one of the biggest drug cartels in the business. And it’s hard not to see echoes of Bryan Cranston’s Walter White as he begins to like the power and thrill of his undercover identity, the flashy “Bob Musella.”

But while the film is a solid one, it never reaches the level of Breaking Bad or the best crime drama classics.

The Infiltrator is directed by Brad Furman, whose previous films – Runner Runner and The Lincoln Lawyer – I haven’t seen. You can’t help but wondering how great this story would have been in the hands of, say, Martin Scorsese.

So, okay, Furman isn’t Scorsese and this isn’t Goodfellas. But The Infiltrator is still a compelling drama as Mazur gets in deeper and deeper into the Colombian drug organization and the various bankers who happily help keep all that drug money afloat.

The ’80s setting is enjoyable and the supporting cast is unusually strong: The under-appreciated John Leguizamo is very good as Bob’s risk-addicted partner Emir; as is Diane Kruger as Kathy, the untried agent who proves to be a quick-thinking asset in the field as Bob’s faux fiancée. Olympia Dukakis shows up briefly as Bob’s materialistic aunt, who’d be just as happy if he were as corrupt as the criminals he’s trying to take down.

Benjamin Bratt is smoothness itself as drug lord Roberto Alcaino, whom Bob and Kathy can’t help liking after Alcaino and his wife welcome them into their inner circle. The closer they get to nailing their targets, the more they find themselves torn – can they betray these people who’ve befriended them? Bob seems less conflicted, but for newcomer Kathy, the emotional toil is a lot higher.

Also worth mentioning: Irish actor Joseph Gilgun (vampire Cassidy on Preacher), who here plays a con that Mazur springs to play his bodyguard and lend authenticity to the sting. Although his role is small, Gilgun makes a big impression as the guy who knows the real life that Mazur is pretending to live. And hey, good to see Streets of Fire‘s Michael Paré in a small role as an informant.

It’s hard to know exactly what’s been changed from the real story, but every time someone is ready to blow the whistle on Bob or Emir, fate intervenes in an all-too-convenient way.  Those are two damn lucky guys.

Ultimately, the film falls somewhere between American Hustle and The Departed. Fans of Cranston won’t want to miss it, but they’ll likely leave wishing for just a bit more.