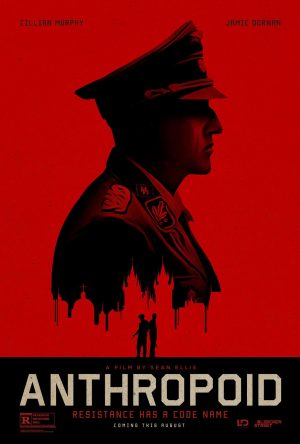 I have two very important words for you: AVOID ANTHROPOID!

A fascinating chapter in World War II about the plot to take out a top Nazi official is, sadly, turned into a maddeningly humdrum drama that’s absolutely not worth your two hours.

Save yourself and either read up on the assassination of Heydrich or watch the Fritz Lang film Hangmen Also Die, about the same incident, instead. What should be a tense, emotional spy thriller is instead a mediocre slog through history with characters you never care about.

Jamie Dornan (50 Shades of Grey) and Cillian Murphy (Inception) play two Czech spies who escaped the Nazi takeover and parachute back in to spearhead Operation Anthropoid, the bold plan to kill the highest-ranking Nazi in Czechoslovakia.

Everyone in the film speaks English but merely adopts a foreign accent, with varying degrees of success. Maybe that’s why one of the only Czech actors in the film, Anna Geislerová, is the real standout. She reminded me of Game of Thrones’ Carice Van Houten (who, of course, is Dutch) but brings an inner life and believability to her character that the better-known actors can never achieve.

That and a briefly glimpsed priest who harbors the fugitives in his church. That actor, Roman Zach, who I’ve never seen before, brings more to his few scenes than the two leads put together.

Try as they might, you never forget for a second that you’re watching Jamie Dornan and Cillian Murphy playing Czech patriots. You don’t care that Dornan’s hand shakes when he goes to shoot a fleeing enemy or load his weapon, except to idly wonder if that was an acting choice or in the script. They never disappear into their characters and so you never get caught up in their fight.

The film begins with the two parachuting into the Czech woods. As the two make it into Prague, they find the Resistance shattered and their one contact gone. They eventually find what’s left of the movement and announce their bold plan. They then are ensconced in a safe house where Dornan quickly falls for pretty Marie (Michelle Le Bon) a friend of their host family.

The Resistance plots Heydrich’s movements, looking for the best place to launch their attack.

To help with their cover, Murphy’s character asks Marie to bring along a female friend. She brings Lenka (Anna Geislerová), who ends up being an invaluable asset and the best thing about the movie. Their first meeting is at a bar filled to the brim with Nazis, where Murphy chews out the women for wearing dark lipstick, since it will make them the center of attention (lipstick being in short supply during the war and all.) He then asks Lenka to hit him since their “scene” needs an “ending.” So much for not calling attention to yourself, Murphy!

Since (spoiler) none of the plotters survived, we have no idea what really transpired and so moments like this ring particularly false.

I waited patiently for the assassination attempt, and for a minute, the film finally seems to come together as it finally happens. But then the plotters must go underground and spend what seems like an eternity holed up in a local church. When the inevitable showdown with the Nazis occurs, the elaborate shootout (which an end note tells us took six hours), feels like it goes on for at least an hour.

When the end finally comes for the last few survivors, sure enough, the audio goes silent and all we hear is the mournful plink of just one piano key. Can we please retire this movie music cliché along with the rest of this film?

And if you thought for a second that the awkward teenager practicing his violin throughout the film will make it unscathed to the end, well, then you clearly haven’t seen enough movies. Did we also need to see him presented with his dead mother’s head in a bucket?

The killing of Heydrich is an incredibly pivotal chapter in World War II, but this film does it no justice. When you’re rooting for the main characters to just go ahead and die already, when you’re angry at a film for wasting two hours of your life, that’s a huge misfire.