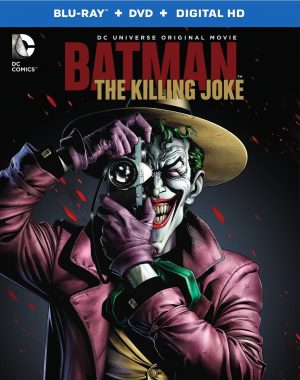 One of the most quintessential Joker stories, written by one of the comic industry’s greatest writers, finally gets an animated movie. And it was okay.

Just okay? It is one of the most popular Joker stores of all time!

But that’s just it. It is a JOKER story, and unfortunately, that’s ultimately not how this new film pans out.

The Killing Joke, written by Alan Moore and gorgeously illustrated by Brian Bolland, has become one of the most acclaimed Batman and Joker stories of all time. Originally written as a standalone book, The Killing Joke has since been worked into the canon of Batman lore.

In the story, The Joker plans to prove to Batman that any given man, when put through the same circumstances he did to become The Joker, would turn out just as mad as himself. His guinea pig in this plot is Commissioner Gordon. After acquiring the proper setting for his grand spectacle, a run down carnival, Joker goes to Barbara Gordon’s apartment and shoots her in the spine. Gordon’s daughter, the original Batgirl, is paralyzed in the process. He then kidnaps the Commissioner and both mentally and physically tortures him in order to drive him to the brink of insanity. The final push, he believes, is showing Gordon what he has done to his daughter after crippling her. Without any way out for him, “Madness is the Emergency Exit,” as the Joker so eloquently puts it in the comic. Surprisingly, that line is nowhere to be found in this new film.

With such amazing and well loved source material, an animated movie of The Killing Joke should be a cake walk. Literally, all the writers and producers had to do was transcribe Moore’s words into script form, animate it with a simplified style of Bolland’s art, and start reaping in the cash. And they did… for the most part.

So what went wrong? It’s that pesky “for the most part” part that nearly kills The Killing Joke for me.

It did not. It should have been kept as an animated short.

They also thought they could add to the story Moore created, and that their new section would be just as good as the original.

It wasn’t. They added a thirty minute prologue to this already nearly perfect story. The new material features Barbara Gordon as Batgirl and a story about why she quit her superhero persona. It is completely unnecessary and added nothing to the story or movie. It actually derails an already powerful story and definitely detracts from the power of Moore’s original work and message.

If you have been following any of the news coming out of Comic-Con International in San Diego last month, you certainly have heard all the brouhaha about this addition. If you haven’t, then the synopsis is this, if you are to believe any of the media coverage:

2. They really didn’t like the new thirty minutes they added.

4. The panelists were shitty, dismissive, and at some points couldn’t even remember the original story they were animating.

Now having seen it, I can tell you this much: in my very humble opinion, the addition of this prologue is not only very unnecessary, it is problematic.

I am a Batgirl fan. I am, in fact, a huge Batgirl fan. She is my favorite comic book character of all time. I own every appearance of Barbara Gordon/Batgirl in comics, from her 1967 “Million Dollar Debut” in Detective Comics #359 to the current Batgirl from her Burnside incarnation. I have a room in my house dedicated to artwork of her from comic artists. There is nothing I wouldn’t love more than more Batgirl in ANYTHING.

Anything except The Killing Joke.

As a fan of the character, this story hits me hard. Harder than any other story in the Batman library because of what the Joker does to Babs. Adding more Batgirl to a story that was never implicitly about her doesn’t heighten the tension or make what Joker does to her any worse; it actually lessens it. By adding this new sequence at the beginning, what it does is disempower Batgirl while moving her decision to stop being Batgirl away from being about HER wanting to choose to stop.

Originally she stopped being Batgirl because she had had enough and could do more good fighting crime in other ways, and she was afraid she was becoming that which she was fighting to stop. For evidence of this, see the Batgirl Special #1 comic written by Barbara (Randall) Kessel, that was released a week before The Killing Joke in 1988.

The film now makes her quitting revolve around her fear that her feelings for Batman (and vice versa) could compromise the effectiveness of their ability to fight crime together. The comic makes her choice about HERSELF; the other is her choice because of HIM.  It isn’t the same thing. It needlessly makes Babs the wrong kind of victim in a story where she is already a victim of a senseless crime.

This also serves to make The Killing Joke about Batgirl and NOT about the eternal struggle of Batman and Joker, which was Moore’s intention in the first place.

What is so powerful about the original is that it shows that the Joker started off like any other poor shlub; he wasn’t always a maniacal killer. Before he became the clown prince of crime, he was you or me, struggling to get by and down on his luck. What the book is trying to show is that what made him the psycho killer he is today could be anyone’s “very bad day”. The Killing Joke also addresses the futile and ultimately destructive relationship between the Joker and Batman, focusing around how there can be no ultimate winner, only losers.

All this because they needed to pad out the 45 minute story to the 76 minutes to officially be considered a feature.

Wrong choices for the wrong reasons.

I am not saying they should have beefed up the already existing scenes; that would have been even more horrible. I am saying it didn’t need to be any longer than it already was. Me saying, “This movie would be awesome if you just cut out the first 31 minutes” is disingenuous. The filmmakers intended you to see the entire film. Azzarello and Timm made a conscious decision to add something that is not only insulting to the character of Batgirl but to the work as a whole.

They were adding more pouches to a perfectly designed costume.

They did it for a reason, and to discount that reason is to discount the film as a whole. They thought that the story itself could not stand on its own.

Where the actual The Killing Joke story begins in this film (which is exactly at the 31:02 mark), continuing to the end, is almost exactly word for word and frame by frame the comic. There are slight changes here and there, but those changes, however microscopic, change the entire meaning and intention of the original work. Little things like having Barbara call him “Batman” instead of “Bruce” like she does in the comic, make it seem like she doesn’t know Batman is Bruce Wayne and that their relationship is only superficial and “professional”. In the comic universe, they are friends who care for one another. Not romantically, but as family. It makes them stronger.

The film on a whole seems rushed and uneven at best. Where they should have taken more time to let the story breathe, they seem to steam roll past. The animation style, sadly, is also not inspired by the book’s art. Brian Bolland’s original art is just as important as Moore’s words. Not having the film style at least be inspired by it is almost insulting.

Instead, we get a hybrid of more traditional 2D animation style and the “Timm look” of Batman: The Animated Series. This is also a mistake, in my opinion.  I get it; Bolland is a very detail oriented artist, but Timm is a super smart and talented guy. I am sure he could have figured out a way to interpret the “Bolland look” into animation. It never really jelled for me. It actually took me out of the story a lot once we got into the actual comic storyline part of the film.

Speaking of that, there has been some confusion going around about in which universe this film actually takes place. I think it is because of the choice of animation style. Having the style look similar to the animated TV show universe and not it be its own thing definitely is the reason. Also, if this was to be a TRUE adaptation of the comic, Barbara and Bruce should not be involved either sexually or romantically; they are family, no matter how much Bruce Timm fetishizes and ships their relationship.  The whole Batgirl/Batman relationship in the animated universe is a totally separate thing altogether. Additional confusion could stem from the fact that almost all of the original Batman: The Animated Series voice actors have returned to reprise their roles. I LOVE all of the actors. Kevin Conroy is Batman. Mark Hamill is Joker. Tara Strong is Batgirl. They were amazing, as you would expect.

However, while it was amazing that they are back, and I loved hearing all the familiar voices, I hate to say it: it actually distracted me and detracted from the final product. It became more about “OMG MARK HAMILL IS SO AWESOME AS THE JOKER I MISSED HIM!” and less about “Holy crap I have always wanted to see this animated!”

As for the quality of the animation, it was all over the place as well. I thought, “Bruce Timm is producing it, there is no way they can mess this up,” and at times, the animation was gorgeous, smooth, fluid, and feature film worthy. However, at other times, it was herky and jerky, like throw away episodes of the animated TV show. You know, ones that the “C” or “D” team animated, and definitely not up to feature film quality. I have grown to expect much better quality from the DC animated features. For the most part, the DC animated movies have been gold. This deserved better.

I mean, this film should work.

So I ask again, what went wrong? I think the answer lies with the creator. Alan Moore once said something to the effect that he writes comics in a way that they can never be made into movies.

I very much believe him, especially after seeing this missed effort.

Had they just kept The Killing Joke a short and not had the greedy notion to stretch it into a feature, they would have had perfection on their hands. But like Watchmen, The League of Extraordinary Gentleman, V For Vendetta and Swamp Thing before it, when they get it wrong, they are unwatchable. But even when they “get it right” and nearly give me everything I could ever want in a movie version of a Moore story, I realize that I didn’t really want it in the first place.

It would be easy to say, “Cut out the first 31 minutes and you have an almost perfect animated version of one of my favorite stories,” but I can’t even do that.

Ultimately in the end, I think all the things that should have made it great all worked against it in a bitter twist of fate.

Batman: The Killing Joke is now available on DVD, Blu-ray and Digital HD