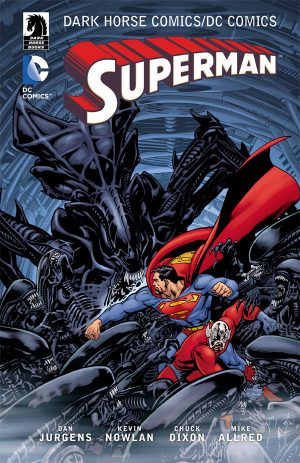 The year is 1995 and like many teenagers entering high school, football practice, parties, social status, pro wrestling, (which didn’t bode well for my social status) and that pesky thing called homework occupied my time and took me out of the comic book game.

That didn’t stop me from noticing the onslaught of promotional material, whenever I would walk by my local comic book shop for the first DC/Dark Horse crossover featuring the Man of Steel and the Alien Xenomorphs from the film series.

For the first time, the Dark Horse Comics/DC: Superman, a 400-page trade paperback version of this intergalactic smackdown as well as other cross company collaborations featuring Superman, has been released just in time for the 30th anniversary of the sci-fi blockbuster Aliens.

Featuring a cover promoting Superman fighting Aliens seems a little misleading, as I was surprised that the second half of the book has nothing to do with the Alien franchise. The stories of Superman/Tarzan: Son of the Jungle and Superman/Madman Hullabaloo do little to augment the event advertised on the cover. Superman vs. Aliens and the 2002 sequel Superman vs. Aliens: God War spearheads this collection.

Part one sees Superman intercept a Kryptonian distress call from Lexcorp. This leads to an investigation in space where Superman discovers a floating city, believed to be Argo City, and far away from a yellow sun. He also finds a lone survivor named Kara who fills him in on the horrific state of affairs. Before you know it, Xenomorphs come out of the woodwork forcing the Last Son of Krypton to endure his own horror-filled nightmare of survival.

Superman is portrayed here to have discovered Argo City and Kara, aka Supergirl, for the first time. These two items are deeply entrenched in Superman mythology so any die-hard fan knows that something doesn’t quite add up.

It would have been better to have some mystery surrounding why there is this blonde girl claiming to be Superman’s cousin, however, it might have diluted the narrative of this non-continuity story that is designed to appeal equally to fans of both franchises. Casual Superman fans might know about Krypton’s off-shoot of a city, while casual Alien buffs know all they need to know about these scary, acid-bleeding creatures.

Dan Jurgens knows Superman better than most primarily because, well…he killed him. So, he was the perfect choice to create a tension-filled situation where the world’s most powerful superhero is mostly depowered and trapped like a rodent hiding from a python. Superman’s fear of death and failure ultimately strengthens his resolve to survive.

While he would like to do it without compromising his no kill rule, you can feel Superman’s anxiety rising with each turn of the page as the raw ruthlessness of the Xenomorphs brings him closer and closer to making an exception and ripping their heads off.

I found myself begging Supes to break his rule, just once, and wipe out the whole lot of them because I’ve seen the movies and know that these creatures can’t be bargained with or co-exist with another species.

Spoiler Alert: Superman wins in the end, but the lasting impression that the Alien’s left on his soul can be considered a moral victory because they lived up to their horror icon status by putting another icon through sheer terror. Superman/Aliens: God War is the less interesting sequel that was released in 2002. Superman is chilling with the New Gods on New Genesis. Meanwhile, Darkseid happens to come into possession of some Alien eggs and unleashes an attack using his Paradeamons as Xenomorph carriers to slaughter his immortal foes.

Chuck Dixon failed to provide any balance that put DC Comics and the Alien franchise on equal footing. The script felt rushed and the Xenomorphs were nothing more than Darkseid’s mindless pawns. The emotional payoff for those who read the first book was perfectly executed as the dialogue and illustration showed a mortified Superman realizing that his friends from the fake Argo city are back.

He rages into “never again” mode as he destroys every Alien in sight. Orion accompanies Superman to face the Xenomorph queen where the morality of his no kill rule suddenly comes into play after he used his heat vision to burn up quite a few Aliens five pages earlier. Darkseid plays a role in the book’s finale, which sets up for another sequel that never came to fruition.

The second half of this collection, Superman/Tarzan: Son of the Jungle along with Madman Hullabaloo are generic yarns that are predictable and carry no engaging narrative content. Madman fans might enjoy the zany story and artwork, but it didn’t gel for this Superman fan.  Dark Horse should have just released the two Superman/Aliens stories as a separate volume because it would have felt like more of a cohesive collection. The book also omitted the 2000 release, Superman vs. Predator, which makes this “collection” instantly incomplete.

The first chapter was a fun read and God War produced a couple of good moments but the overall package fails to excite and adequately compensate Superman and Alien aficionados to their desired result.