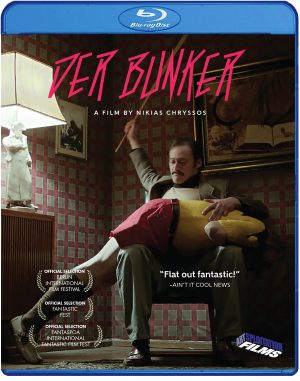 For those of you who felt The Lobster was just a tad too mainstream for a Summer release, Der Bunker should strike your fancy.

Dark, exploitive and fairly twisted, the movie sets itself up with a nightmarish Airbnb-ish worst case scenario.

A mysterious lodger claiming to be in solitude for his writing and research project quickly discovers his solitude substituted for stranger things—the rental is a bunker with little available natural light, the host is a tad creepy and pushy all at once, the host’s wife is a moody seductress, and their eight-year old “kid” a more disturbing man-child than Clifford from the 1994 Martin Short vehicle.

And then things get weird.

About 5 minutes into the film I was completely braced for things to full Human Centipede or Hostel, so I found the comedic, yet strange, direction to be a bit of a relief. Der Bunker is ultimately a John Waters film by way of David Cronenberg. A lot of the film’s charms are trashy, and perverse, but ultimately very, very funny.

Yet way beyond the bizarre, there’s something deeper going on here.

As the stranger elements of the story develop, I found myself immersed in its unfolding, right alongside the protagonist lodger. Both of us could have, and by standard measures of sanity should have, bailed on the ghoulish family much earlier.

There’s no mistaking the world Chryssos has created here for our own, but the allegorical farce includes biting critique of the world we live in today. The disasterous fallout of the nuclear family, overstructured reliance on home-schooling, and the over-reaching expectations parents place on their children are all not-so-subltly lampooned as only German cinema can. Rainer Werner Fassbinder would have been proud.

If you’re looking for something really different, not clearly defined as Horror or Comedy, yet clearly soaked in a foot bath of both, check yourself in. Der Bunker is a cinematic curiosity piece made for a crowded late-night screening, and certainly something weird for collectors of the mondo trasho to add to their shelves.

Der Bunker is available now on DVD, Blu-ray and a 90 day exclusive streaming window on Vimeo