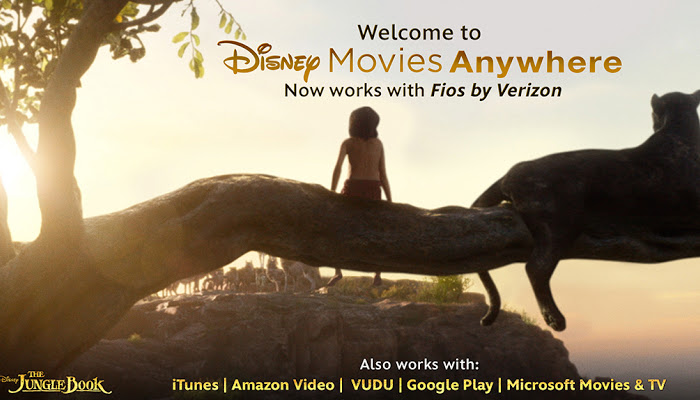 Continuing efforts to provide more ways to buy and watch your favorite Disney, Pixar, Marvel and Star Wars movies at home or on the go, Disney Movies Anywhere has announced the addition of Fios by Verizon, the first multichannel video programming distributor to join its cloud-based digital movie service platform.

“We’re thrilled to welcome Fios by Verizon to our Disney Movies Anywhere experience,” said Dan Cohen, Executive Vice President, Pay Television and Digital Disney/ ABC Home Entertainment and Television Distribution. “This is an invaluable addition as we continue to expand access and connect our customers with their digital movie collections across multiple platforms and devices.”

“Disney Movies Anywhere is the perfect fit for families on the go,” said Tricia Lynch, Executive Director, Content Strategy and Acquisitions for Verizon.  “Disney Movies Anywhere will let Fios customers watch all their great Disney movies on their home TVs with Fios on Demand and on their phones or tablets with the Fios Mobile app – anywhere they are.  We’re happy to partner with Disney on this ground-breaking innovation for our customers.”

In celebration of this partner launch, for a limited time Disney Movies Anywhere is offering a free digital copy of Disney•Pixar’s Monsters, Inc. to new and existing members who connect an iTunes, Amazon Video, VUDU, Google Play, Microsoft Movies & TV and now Fios by Verizon account to Disney Movies Anywhere. Offer is valid through September 7, 2016.

About THE JUNGLE BOOK

Disney’s live-action epic adventure “The Jungle Book,” which has earned more than $955 million at the global box office to date, will be available early on Digital HD and Disney Movies Anywhere on August 23, and on Blu-ray Combo Pack, DVD and On-Demand on August 30. The release includes in-depth bonus features that reveal the innovative filmmaking technology used to create the richly immersive jungle world and characters; takes viewers on a journey of the film’s only on-screen actor, charismatic newcomer Neel Sethi (Mowgli); provides a glimpse into a candid and humorous scene-by-scene audio commentary with director Jon Favreau and introduces viewers to the all-star voice cast who help bring the film’s colorful characters to life, as well as the musicians who accent the adventure with a majestic music score.

Directed by Jon Favreau (“Iron Man,” “Iron Man 2,” “Chef”) and produced by Favreau and Brigham Taylor (executive producer of “Pirates of the Caribbean: Dead Men Tell No Tales,” “Tomorrowland”), “The Jungle Book” is a live-action epic adventure based on Rudyard Kipling’s timeless stories, inspired by Disney’s classic 1967 animated film and centered on Mowgli (Neel Sethi), a man-cub who’s been raised by a family of wolves. But Mowgli finds he is no longer welcome in the jungle when fearsome tiger Shere Khan (voice of Idris Elba), who bears the scars of Man, promises to eliminate what he sees as a threat.  For more information, visit movies.disney.com/the-jungle-book-2016

About The Walt Disney Studios

For over 90 years, The Walt Disney Studios has been the foundation on which The Walt Disney Company was built. Today, the Studio brings quality movies, music and stage plays to consumers throughout the world. Feature films are released under the following banners: Disney, including Walt Disney Animation Studios and Pixar Animation Studios; Disneynature; Marvel Studios; Lucasfilm; and Touchstone Pictures. The Disney Music Group encompasses the Walt Disney Records and Hollywood Records labels, as well as Disney Music Publishing. The Disney Theatrical Group produces and licenses live events, including Disney on Broadway, Disney On Ice and Disney Live!.