Lucy and Andy are prehistoric siblings dealing with issues all kids face—bossy babysitters, not always liking their dinner (usually mammoth meat!), doing chores, and not being old enough for family outings—especially the epic mammoth hunts. Cave life can be pretty unfair sometimes, but one thing is for certain—there is never a dull moment. Especially with the arrival of a new group called humans.

Both funny and informative, the book is perfect for readers of all ages, evolution not required!

Jeffrey took some time to discuss the book, it’s research process and what he has coming up.

FOG!: Your newest book, Lucy & Andy Neanderthal is both a funny, slice-of-life comic that also includes a surprising amount of scientific information and facts.  What was the genesis of the series?

Jeffrey Brown: I’ve always been a fan of pre-history, having grown up loving dinosaurs and cavemen, but the media for kids dealing with cavemen especially has always been extremely fantastical. Taking my son Oscar to The Field Museum in Chicago and watching BBC shows like Walking with Dinosaurs and Walking with Caveman made me think it should be possible to have a fun caveman story for kids that was still grounded in the research. I originally thought up the idea as a cartoon back in 2010, but shelved the idea and when I was figuring out something I’d like to work on after Jedi Academy, I realized Lucy & Andy would be perfect for a book series.

What kind of research did you do in writing the book?

I read every book I could find, every article, watched every documentary and TV special, and started reading about every new announcement and new research paper. I read books from out of date children’s books to the latest collections of graduate studies scientific essays (not that I could understand all of the technical data in those!). I wanted to really understand the research as much as I could, so I could fit it in the story as seamlessly as possible. There’s new research every day it seems, so I’ve also got a Google alert set up so I can at least try to stay current. There’s been a few times where I’ve had to adjust the books slightly in order to incorporate new information. 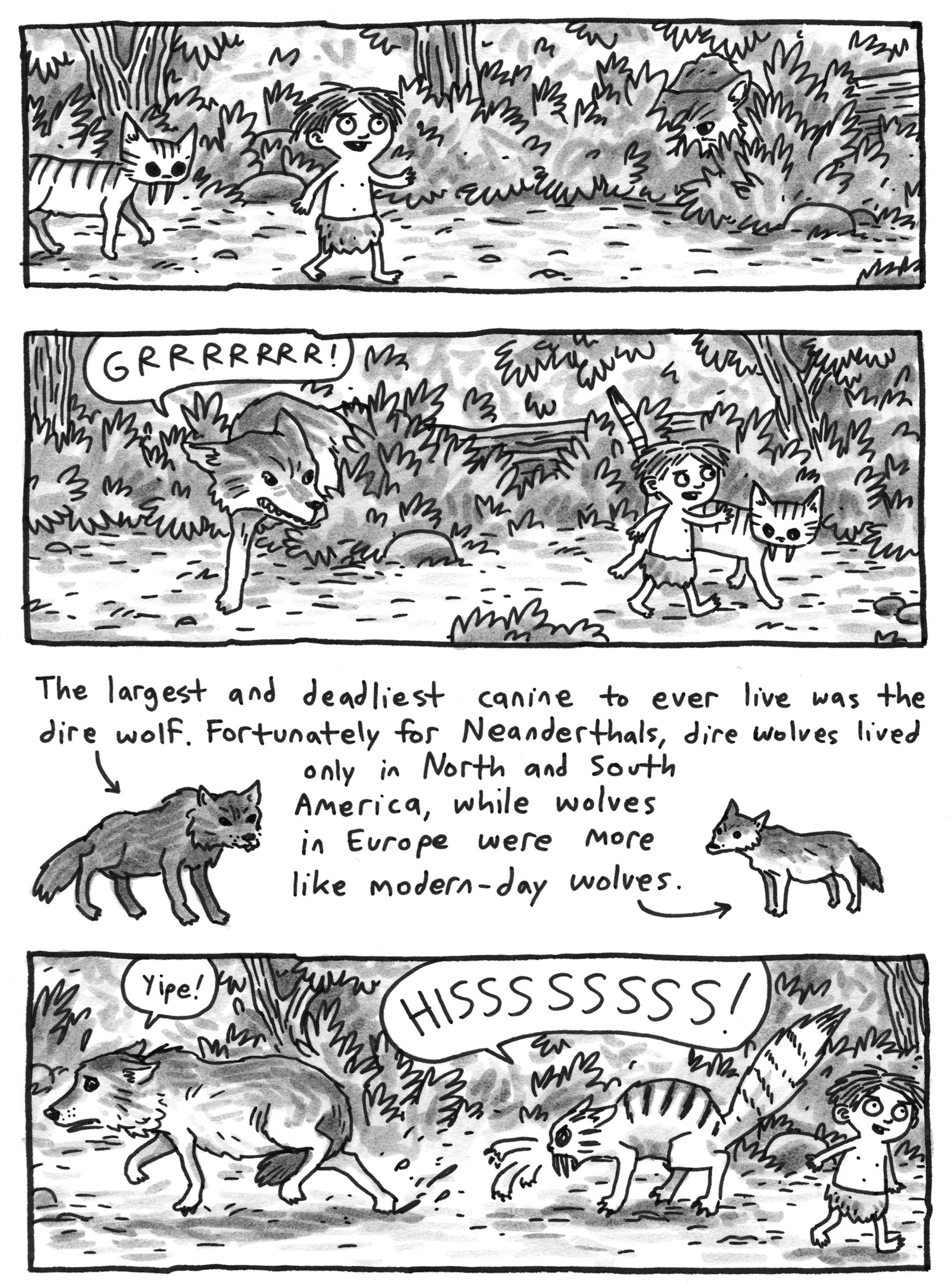 I first became aware of your work in the indie comics scene and it seems like you had a shift, first with Incredible Change-Bots and then with your Star Wars Darth Vader and Jedi Academy series where your work became not only a little more sentimental and nostalgic, but also geared toward a younger reader.  Did anything in particular initiate that change in the direction of your work? 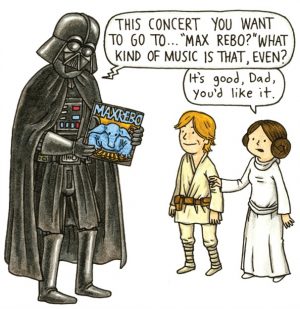 It would make sense to think that having kids led me in the younger direction, but it was more organic than that – the Vader books were actually intended for adults at first, but kids happened to love them as much if not more. I wrote Jedi Academy in a tone that was close to how I would write an autobiographical adult comic about my middle school years (with a lot of the situations based on my own actual experiences).

And Lucy & Andy is full of research that adults should appreciate and get a lot out of. I have more adult projects planned and in the works, but the other factor has just been timing and opportunity. It’s not so much that I’m interested in writing for particular ages as being able to write things I’d like to that happen to be for younger readers.

Lucy & Andy Neanderthal is the first book in the series.  Is there a finite number of volumes planned or will we see Lucy & Andy in other periods of history?

It’s planned for three volumes, which should satiate my curiosity and exhaust the basic information I wanted to cover. I think Lucy & Andy’s story can continue, but maybe in another format, because the way I’ve planned out the books gives a natural end to the series, too. In the back of my mind I’ve already been developing the characters for my next series, so at the very least Lucy and Andy will get to take a break. 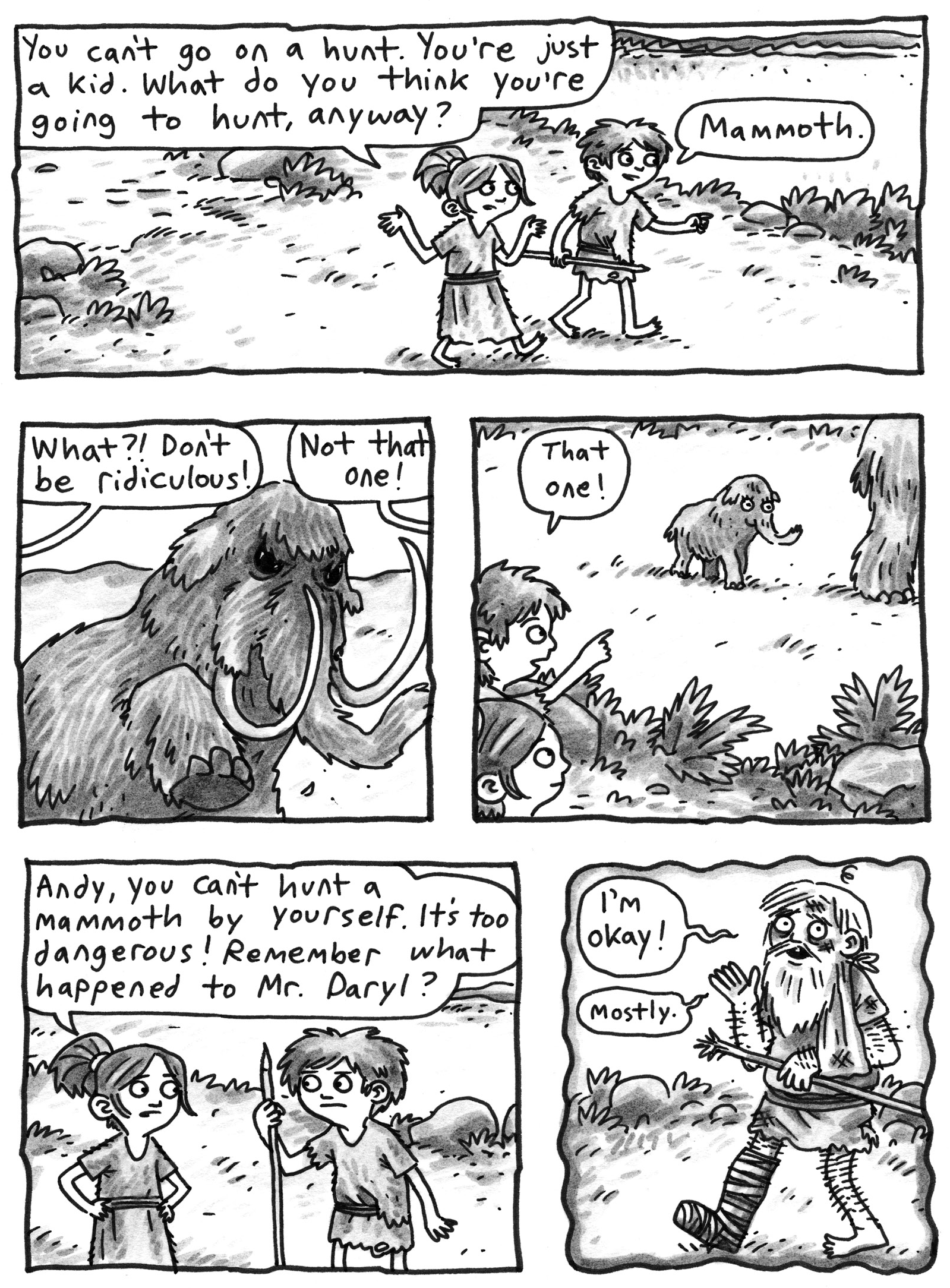 Who or what have been the biggest influences on your work?

I don’t know that I have a biggest influence – I feel like everything I see, read, watch, and listen to has some kind of influence, whether it’s the music of Andrew Bird, shows on Cartoon Network, books I read when I was young like Small In The Saddle by Mark Alan Stamaty. Then there’s also the influence of people themselves – my parents and brothers, my wife and own sons now, or even other artists whose work I’ve loved but who also live life in a way that inspires me. I try to have as many influences as possible, and hopefully enough of them that people can’t tell how derivative my work can be!

What about the comics medium still inspires/challenges you and why do you use that as a particular venue for telling stories?

I think comics are able to push the boundaries of combining text and image in a way that also pushes the definition of comics – whether it’s the work of Chris Ware, or hybrid zine mini comics, there’s space to create stories in different ways. With Jedi Academy I was able to use lots of different formats for pages beyond just panels, and Lucy & Andy also incorporates the factual text in a different way than the comics telling the story.

I always have a billion projects in the works at various stages, but right now I’m mainly focused on book two of Lucy & Andy, and also my first picture book (if you don’t count the Darth Vader books as picture books).

I’ve been enjoying the Tom Scioli/John Barber Transformers vs GI Joe comic book series, re-watching the latest episodes of Game of Thrones, and am looking forward to Rogue One coming out so I’ve been checking out the latest trailers and teaser footage of that. 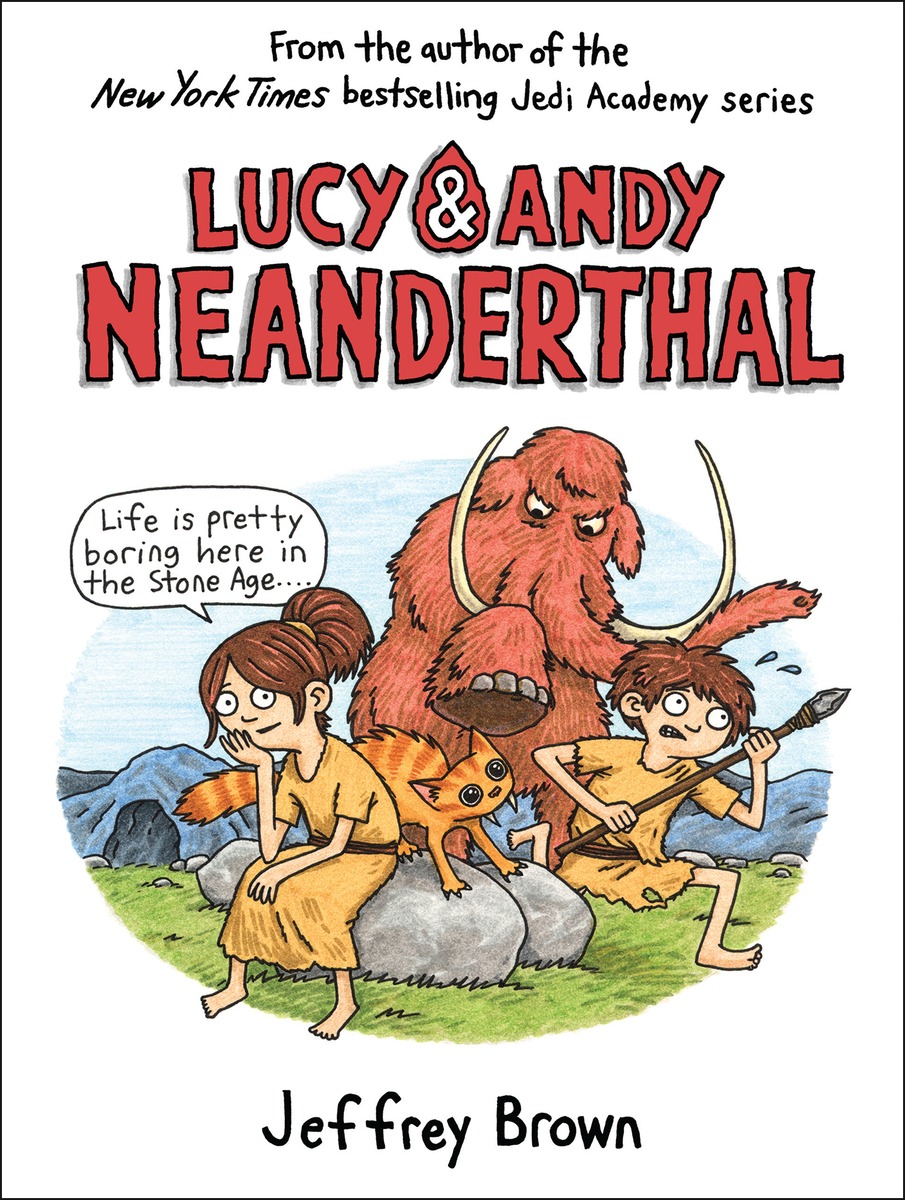