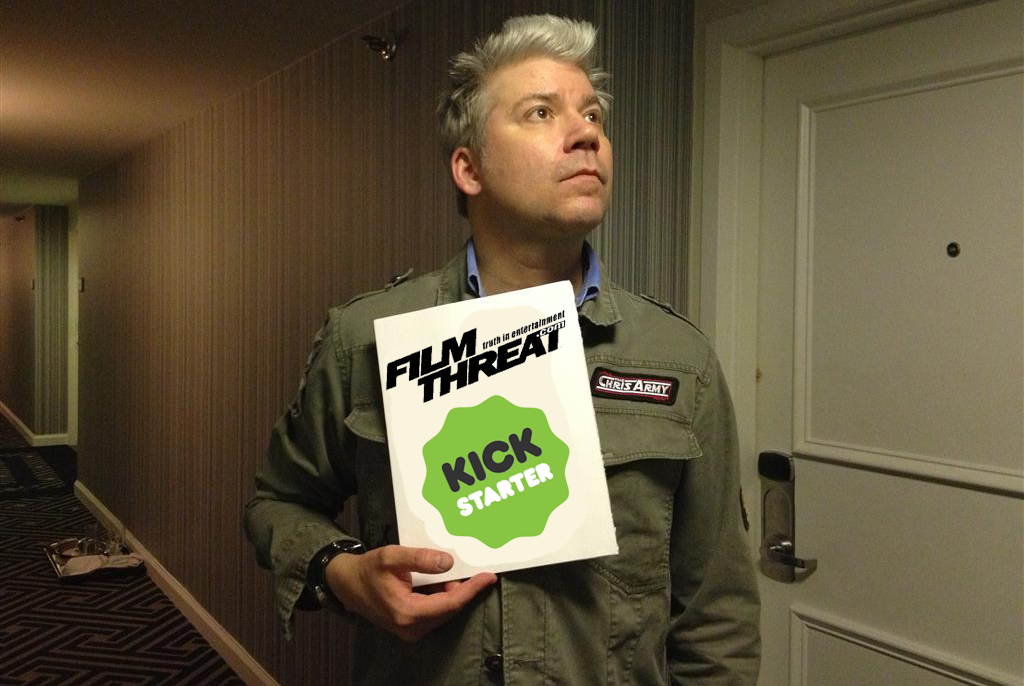 One of the best things about social media is the opportunity to connect with not only people who share the same interest as you, but also people that have influenced you in some capacity.

Chris Gore is one of those people.  Twenty five years ago when I was in college I discovered his magazine, Film Threat, and became a regular reader.  Chris’ timing couldn’t have been better.  Film Threat covered a large amount of independent cinema and in a very short period, indie cinema exploded with large numbers of talented directors including Quentin Tarantino, Robert Rodriguez, Steven Soderbergh, Spike Lee, Whit Stillman, The Coen Brothers, Gus Van Sant, Abel Ferrara, Noah Baumbach, Allison Anders, Alexandre Rockwell, Carl Franklin, Tom DiCillo, and many others,

Film Threat covered their movies in a way that no other print media was at the time.  In many ways, the magazine was the inspiration for online film journalism, and I believe that every film related website (including Forces of Geek), owes a debt to Chris Gore and his trailblazing magazine.

With this Kickstarter, here’s your opportunity to help out one of the cinegeeks who made a difference in my life and in the life of many people.  Chris took some time out of his schedule to discuss the magazine, the Kickstarter campaign and the future of indie film.

FOG!: Film Threat has been a part of your life now for over three decades, predating and in its own way, creating the kind of passionate film journalism that’s become a part of online culture.  What was the genesis of the magazine?

Chris Gore: When I was in high school in the 80s, zines were just beginning to emerge. Inexpensive xerox machines made self-publishing a possibility. So all these punk rock fanzines were sold at music stores in my hometown of Royal Oak. They mostly focused on bands and skateboarding. And while I liked those things, my real passion was film. I simply thought to myself, “I want to do a punk attitude-type of ‘zine but about movies.”

It wasn’t until David Lynch’s Dune came out in 1984 that I finally moved ahead and put out the first issue. Dune was my favorite book as a kid and I read it every year in high school. When I heard that David Lynch was going to make a film adaptation of Dune, I lost my mind! I looked forward to seeing that movie and read everything I could in every film magazine at the time.

My mother worked in the book industry at the time and got me into an early screening and I thought the film was a mess. I was so disappointed. I was upset and embarrassed that a movie based on this source material by a filmmaker that I so admired had turned out to be such a piece of cinematic garbage! I took my anger and channeled it into the very first xeroxed issue which I handed out in my Film History class at Wayne State University on February 6, 1985.

An entire generation knows you from Attack of the Show and the X-Show as well as your podcast and for your overall presence in the pop culture zeitgeist.  What led to Film Threat‘s original ending and why do you think now is the perfect time to relaunch the brand?

Film Threat is like a zombie. It has died and been resurrected so many times. It has also gone through many incarnations from a xeroxed fanzine, to newsprint with color cover, to a slick magazine and then to a website along with a spin-off magazine, a line of indie films on DVD, a t-shirt line, etc… The voice has been mostly consistent, which, well, is me.

I decided in 2010 to focus on some other projects and I sold the magazine to Mark Bell in March of that year. That break really allowed me to get creative in other areas and I really needed time off from Film Threat. There is certainly a burn out that comes from doing that kind of work over decades. 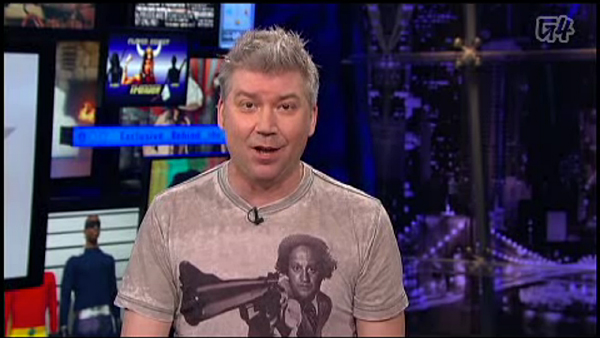 When the rights reverted back to me in 2015, I launched a Kickstarter to bring the site back, but I did everything wrong — the campaign wasn’t focused, I was trying to do too many things at once, the amount I was asking seemed like too much — I made every mistake you could possibly make. I took that failure as a time to reassess and work on some new projects that include a book about Film Threat and a documentary.

You tried a Kickstarter last year which received half its funding.  This time out you’re looking to raise a more modest sum and your plans for the project have changed.  What is the money going toward in this campaign?

As I said before, I made a lot of mistakes in my initial campaign. I got very lucky as a web designer stepped up to show me how the site could look. (If you donate to the campaign, you’ll get a sneak peek at the new site design, which is fantastic.) So I first need to give Kickstarter their cut, fulfill the backer rewards, then I need to pay our designer for his work, get a new server on a long term contract, a programmer needs to get paid to be sure that all the old content is viewable in the new format and that there are no bugs, then the app will make the site readable on mobile devices and tablets, then I’m not just doing a podcast, I’m going to be launching a podcast network.

The amount I’m asking for is modest, but I never really stopped working on the site. There’s that triangle-shaped project diagram that we’ve all seen in which there are three options, but you can only choose two: Good. Fast. Cheap.

I think you can guess which two I selected. Since I really have had no money to work with, I am doing it on the cheap, so it’s not fast. Getting this campaign funded will give me the necessary funds to go live with the site.

You and Film Threat have long been advocates of Indie Film. Film Threat‘s Golden Age was during the mid-90s during the independent cinema boom which introduced audiences to Quentin Tarantino, Kevin Smith, Richard Linkletter and Robert Rodriguez.  It feels now that Indie Film is entering it’s Silver Age.  How do you think this renaissance is different than it was 25 years ago? 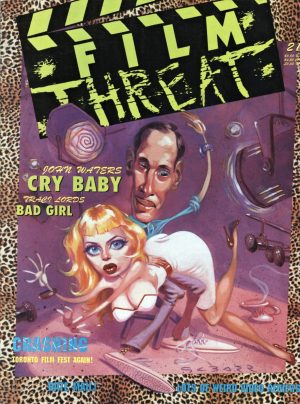 Social media and crowdfunding has put power in the hands of creators rather than those investors holding the purse strings. Money is a big part of any film project and there was certainly a gold rush in the 90s.

But we live in an age of major studio franchises and movies with $200+ million dollar budgets leaving little room for small films in the market.

I’m looking forward to supporting those lo-fi, no-budget movies made with an iPhone. I expect to see an explosion of these in the coming years and one of them is going to resonate and hit it big.

I am looking forward to discovering the Kevin Smiths and Quentin Tarantinos of tomorrow.

You mentioned an app as part of the Kickstarter.  What exactly will it do?

As I referenced earlier, it will allow the site to be more easily readable on mobile devices and tablets. The intention with the app is to give one the feeling of reading a magazine, so the design is very upscale. I think that also puts the indie films that we’re covering in the best light.

In addition, we’ll add other functionality including notifications about free screenings hosted by Film Threat. I’ve already met with the programmer for the Alamo Drafthouse in Los Angeles where we’ll host a screening series as well as record the Film Threat podcast live in front of an audience. It’s very exciting. I don’t want to talk too much about the app as some of the functions are things that no other film site is currently doing, and I want to keep those a secret.

Since you’re a well-established cinegeek, what 10 films would you bring with you to a desert island?

Provided the Kickstarter is successful, will the site offer new content beyond podcasts or is it just an archive of previous material?

The site will be updated daily with new content including reviews, interviews, reports from film festivals and new revolving columns that, again, are not like anything that any movie website is currently doing.

Part of me wants to come back because I’ve grown tired of what the current crop of film websites is covering — they seem to be obsessed with Star Wars, Marvel and DC movies, and I like those, but I have a more diversified media palette. I’m most excited about the new columns intended to help indie filmmakers.

Film Threat has always been about championing causes and injecting humor to make a serious point. That will continue and I’m chomping at the bit to get started.

Finally, what are you geeking out over?

I am a media junkie, so my list can be a long and varied one….

And next week the list will be totally different. Thanks for asking!