In latest book, Killfile, we meet author Christopher Farnsworth’s newest invention, John Smith, who is gifted with telepathy which he offers to the highest bidder.  This electric thriller deals with such timely issues of privacy and technology that resonates long after you’ve finished the book.

Chris took some time out of his busy schedule to discuss Killfile, his influences and what’s to come.

FOG!: How would you describe your new book, Killfile?

Christopher Farnsworth: Killfile is a man-on-the-run thriller featuring John Smith, a former CIA operative who now works for the One Percent, cleaning up problems for billionaires. John has one special advantage over his competition: he reads minds. The CIA helped him weaponize his natural telepathic gift, and now he can access people’s thoughts, dodge a punch when it’s still just a bad idea, and even plant pain and nightmares into other people’s heads. But he’s constantly dealing with our mental chatter, and he hates it. So he takes pills, drinks heavily, and saves his money for the day when he can walk away from the rest of humanity.

Everett Sloan brilliant investor and stock trader offers him what seems like the answer to all his problems: a private island. To get it, John will have to erase the memory of the investor’s former protégé, a tech genius named Eli Preston, and recover some valuable intellectual property. But Preston wants to keep his secrets locked inside his skull — and he’s willing to kill to do it.

Basically, imagine a Jason Bourne who can read minds going up against a psychopathic Mark Zuckerberg.

You’ve written three novels featuring Cade, a vampire who serves the President and now, in Killfile, we meet John Smith, a psychic-for-hire. Before writing do you establishing the rules of how their abilities work, or do you see where the story takes you?

Vampires and telepaths aren’t exactly new in fiction. This is ground that’s been covered by a lot of other writers, so I wanted to make sure I was very clear about what they could do, and to try to establish a new spin on the old tricks. For Cade, that meant deciding what was real about the vampire myth, and what was only folklore in his world.

With John Smith, I established the rules of telepathy right up front. John explains to a client what he can do, and what he can’t. For starters, he can’t control anyone’s mind. He calls that the “Vegas Act” — everyone expects him to be able to make people cluck like a chicken, as if he was some kind of lounge-room hypnotist.

He says he doesn’t like this analogy, but he’s more like a hacker. If your brain is a computer, he can read your email, mess with your apps, and even run some of your processes — but he can’t rewrite you from the command line up. People are more complex than that, and while he can meddle with their thoughts, he can’t change who they are. It would be a pretty short book if he could.

The downside is, he always gets a percentage back of whatever pain he inflicts on someone else. It’s the cost of doing business for him. For me, it’s important that these gifts are never free. There’s always a catch.

Otherwise, life for a guy like John would be way too easy.

In a post Snowden world, information is a commodity. How does that play into Smith’s gift and background?

In the real world, a guy like John Smith would be the perfect CIA employee. There would be no secrets from him. He’d be the perfect interrogator, the perfect spy. As his mentor, Cantrell, says in the book, the problem isn’t knowing what people are doing — the intelligence agencies can tell you what every world leader had for breakfast today, they can train their spy satellites on Syria and see ISIS terrorists doing target practice — it’s knowing what they’re thinking. We have to connect the dots, to know what people are planning. That’s still the missing piece. A guy like Smith could provide that.

This might be the most intense book of yours yet. What kind of research did you do and were there any creative influences for Killfile?

I did a lot of research on the real-world attempts of the U.S. to find or create actual psychic spies, starting with Jon Ronson’s The Men Who Stare At Goats and my friends John Whalen and Jonathan Vankin’s The 80 Greatest Conspiracies Of All Time. The CIA and military were obsessed with psychic soldiers for years. Google Project Star Gate or MKULTRA and you’ll see how far they went looking for someone like John Smith. The idea that we could end or prevent a war by changing how people think is both fascinating and terrifying. That’s really where John Smith comes from — our actual attempts to control minds.

I also delved into things like algorithmic trading, which uses computer software to find patterns in the stock market, and researched how to break into a computer server farm.

Creatively, Killfile owes a lot to Octavia Butler’s Patternist series, as well as countless other novels about telepathy. I also re-read Richard K. Morgan’s Takeshi Kovacs novels while I was writing it, trying to get a little of his deadpan humor and talent for violence into my scenes.

What else do you have coming up? Is there the possibility that we might see Smith and Cade team-up?

I hadn’t thought of that, but that’s a great idea. Now I’ll have to find a way to make it work.

In the meantime, there will be another John Smith novel next year. I just finished the first draft and turned it into my editor. The working title is Flashmob. Smith goes up against someone who has figured out a way to weaponize social media.

Everyone should read Claire North’s The Sudden Appearance of Hope. Brilliant and beautifully written. I just finished Blake Crouch’s Dark Matter, and it’s great. And I’m reading Harry Potter with my 8-year-old daughter.

As for TV, I am a die-hard Archer fan, and cannot wait for the next season. It just keeps getting better. Very stoked that my friend Beau Smith’s creation Wynonna Earp has just been renewed for a second season on SyFy. I was a huge fan of what Emily Andras did in the first season, and I’m glad to see she gets to continue the story. Also geeked for Luke Cage, which looks perfect.

Finally, for comics I’m reading Ninjak religiously, as well as Wynonna Earp (the comic book version), John Allison’s Bad Machinery and Giant Days, and just caught up with the entire run of The Wicked and The Divine. 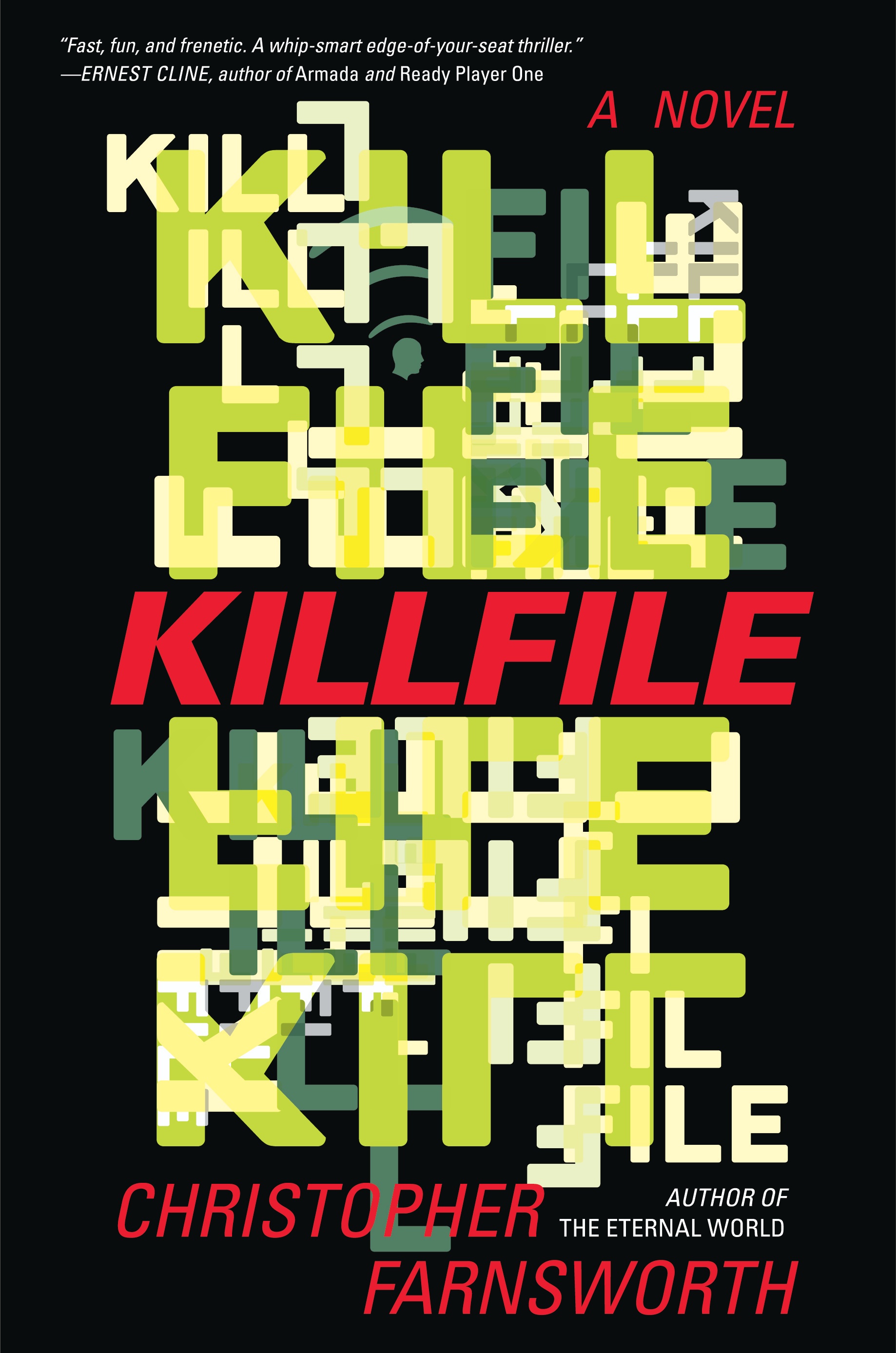 Killfile will be released tomorrow via print and digital platforms.
For more information visit chrisfarnsworth.com