Welcome back to Graphic Breakdown! Time to talk about this weeks titles over at the DC Rebirth. 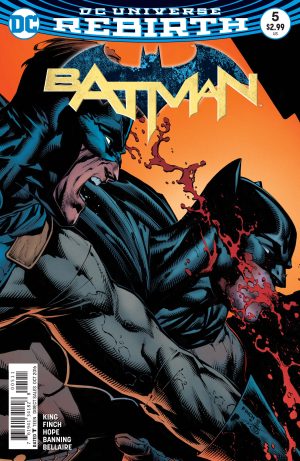 Tom King’s first arc on Batman comes to a close in the same lackluster way it began. This is the one that made me the saddest. A great writer. A great artist. A book that isn’t great at all.

It’s not all bad. There are moments. But for me they don’t add up to much. It’s just a serviceable story and art by two talents that are anything but.

I kind of wish John Romita Jr. and Finch would switch places on their respective Bat-Titles…maybe the art on each would be a little more inspired? Or maybe not. I enjoyed Scott Snyder’s writing…I prefer that one over this.

The next arc I saw coming doesn’t look much better. Let’s hope it is. This one was a real shame. I hope it picks up soon. 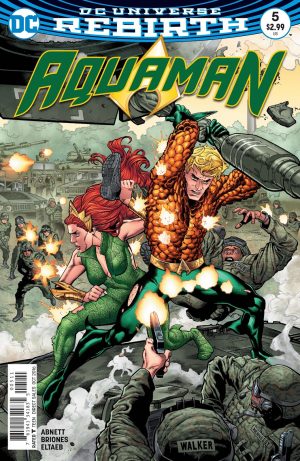 There’s an Aquaman movie coming out. You wouldn’t know it to read the latest iteration of Aquaman.

Aquaman has never been a favorite, yet there have been some great takes on him. This is not one of those great takes.

The writing is flat on this. The art doesn’t do much to elevate it. It’s just another book destined to end up in a ten cent bin at a convention and then you read it and feel ripped off.

Again, the creators on this are talented but the work they are doing here isn’t exciting at all.

Hopefully this gets canceled and somebody figures out what to do with it.

There are plenty of other things to spend your money on. 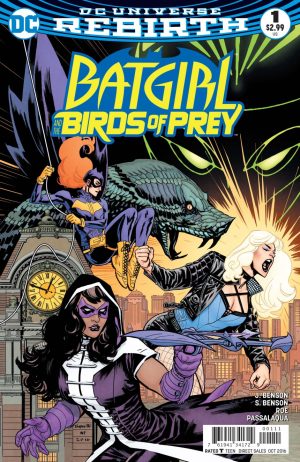 Batgirl and Birds of Prey #1

Just like the previous issue of this title, this is a lot of fun. I thought the Bensons did a great job of tackling the female characters here.

They also have one of the better takes on Batgirl I’ve read.

The story here is “Who is Oracle?” this is a lighter tale but I actually found myself interested and caring. This is a really fluid story and a great start to a series. The characters have great dialogue and you actually care somewhat to what happens to them.

See? I ask for very little!

The art by Roe certainly elevates the book and it’s wonderful to look at.

The story and art work hand in hand and together work beautifully. I’ll be interested to see where it goes. It certainly stands out in the current DC lineup. 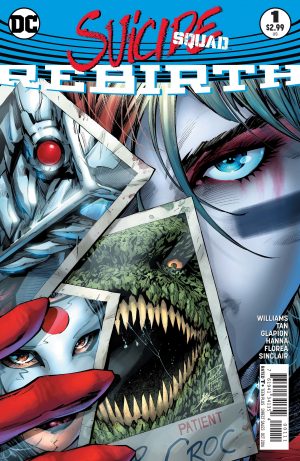 By far one of the most anticipated titles of August is this book.

And this is yet another book that could have been great, but comes off a little shoddy. It’s actually not bad, but it’s so far removed from the Suicide Squad I know that it came off like Suicide Squad by way of early Image.

The John Ostrander/Luke McConnell run on this title years ago was fantastic.

This doesn’t come close to that. It’s not bad, but it’s not as much fun as you hope. Williams has fun with the writing, but I feel you need a writer with some real cajones on this title.

And Jim Lee is providing the art. It’s okay art, but by no means amazing. I wonder how long he will stay on the title.

The backup story by Williams and Fabok is better than the main story. But it shouldn’t be like that. I wish there was a more “dangerous” feeling to this book like the book I used to read rather than the “Commercial” feeling it left me with. 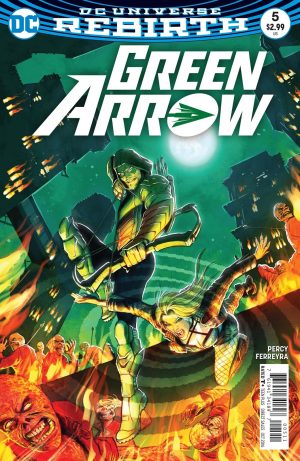 As Green Arrow gets further and further away from the Green Arrow I grew up with, the art just keeps on soaring on this book for me. Ferreyra is spectacular.

The writing isn’t bad, but for some reason I feel like Percy may be running out of steam. It’s getting a little too much like Green Arrow is the DC answer to James Bond for him. Which isn’t the Oliver I know.

But even when the story doesn’t work the art does. So I’m following it with open eyes. Get this guy on a Batman or Superman title.

The last two pages of this book are gorgeous. Just gorgeous. Pick it up if only for that. But it’s not a bad book. Better than most in the new DC line. 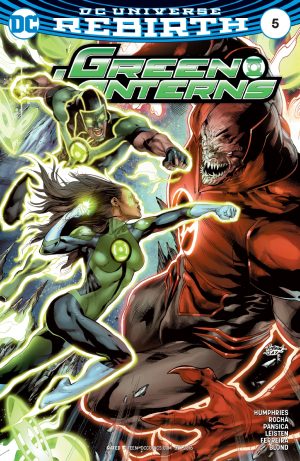 Part five of the Rage Planet storyline had me laughing out loud at one part.

I honestly lost all interest in this title. Yet, I couldn’t hold it back. So I am upping the grade for the belly laugh.

The story is pretty straightforward and dull and the art, while decent, leaves me kind of cold.

So I won’t rip into the book too badly, just to say it’ll probably be canceled. And soon.

Oh, the line that made me crack up? A Red Lantern screams out “Red Dawn is Coming!”

I was done at that point. Then I watched the 80’s version of Red Dawn. 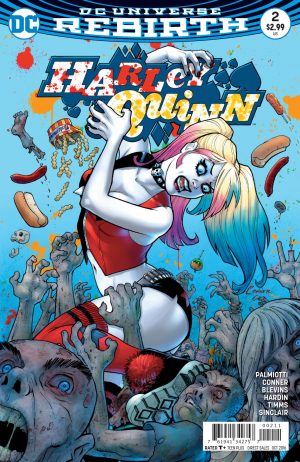 I said it before I don’t really read this title. But this? I have enjoyed.

The writing is goofy and fun.

The writers have a great handle on Quinn. And what’s great, is that DC didn’t really change anything on this for the fans.

I have to say I enjoyed seeing the layouts of Bret Blevins. He’s a good artist we haven’t seen lately! Bring him back for more things! I like Blevins and the energy he brings.

So if you are a Harley Quinn fan pick up this book.

If you’re not? Give it a chance.

I had fun reading it and while it won’t save the world, it’s better than most. 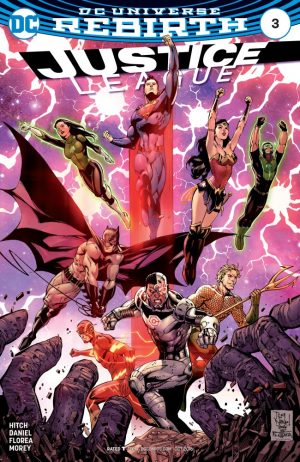 So part three of “The Extinction Machines” rages on, and it’s not a bad version of the League. It just feels pretty on the outside and hollow on the inside. You’d think DC would realize there is a Justice League movie coming up.

That’s not to say this is horrible. It isn’t. It’s just…okay. It doesn’t seem to take place in the regular DC Universe either.

Just “Hitchverse.” Why can’t there be any continuity or connection? This books especially feels like it’s coasting out in the middle of nowhere.

Still, hitch is a better artist than a writer so the story is okay. And Daniel is a good artist. It just feels less than epic overall and less than what it could be. 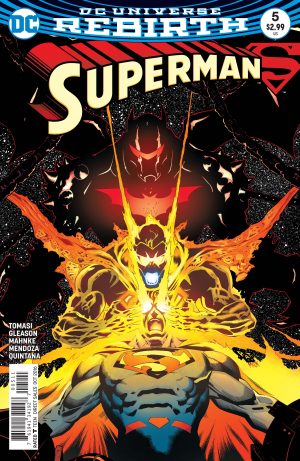 Because Doomsday wasn’t enough to make you feel like it’s the 90s, this team has brought back The Eradicator. Does anyone remember him? If you answered no you can sleep peacefully. If it’s yes, well I’m sorry but he’s back.

The story is limping along in this title and in all of the Superman titles pretty severely. I find myself hardly caring of what is going on.

Yet, this issue gets a higher grade. And why? The Doug Mahnke art on this is so damn good and passionate, that I couldn’t look away. Mahnke has always been a talent and It’s good to see him. That last panel is especially good.

Maybe it’s time to reboot some of these titles however. You could start with the Superman line and see how that goes. 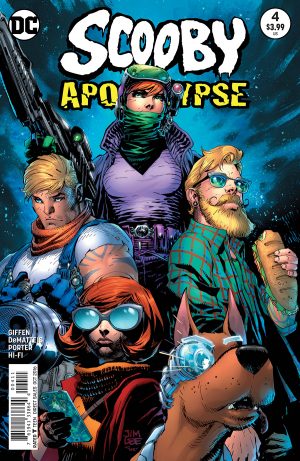 Scooby Doo and the Apocalypse #4

Written by Keith Giffen and J.M. Dematteis and illustrated by Howard Porter
Published by DC Comics

The hot dumpster fire that is this title is raging on.

This is one of the worst titles of the year. If not the century. If not ever.

Such talent behind this title.

Put them on Superman! But for gods sake, it’s almost unbearable to read.

Please somebody save these three creators.

I have nothing else to write except maybe put hot pokers in your eyes rather than read this.

It may be less painful 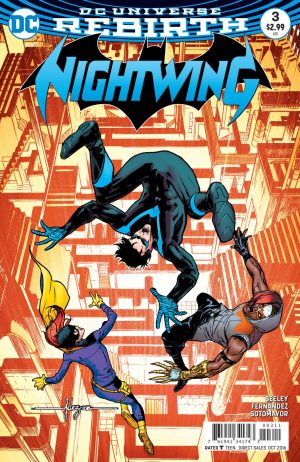 Well, the storyline “Better Than Batman” is back this week. The new character of Raptor is here. And he’s boring as can be. The story isn’t half bad, but it’s so damn predictable it feels written by the numbers rather than be organic.

That’s not to say that Seeley can’t write. There are some nice flourishes and moments. And the art is pretty good too. It has a nice design to it.

Still, I want to see more from Seeley, so I challenge him to write a stronger book. I know he has it in him. He’s not quite there yet for me. 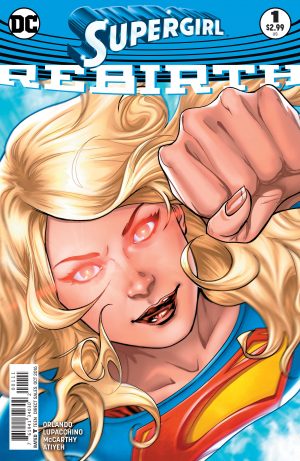 I figured I would end this week with one of the better Rebirth launches.

Supergirl feels different than anything we’ve seen with Rebirth. It could stand to be stronger.

I feel like this book has potential though. It’s what they do with it from here. I feel like Orlando has a good story overall to tell us. He does a decent job in the first issue.

I did want more meat and more emotions but in this current climate I’ll take what I can get.

The art is perfectly lovely here, and I went back after I read it just to look and that’s a rare thing. One of the splash pages is gorgeous to look at and can make a nice poster even.

But will this last?