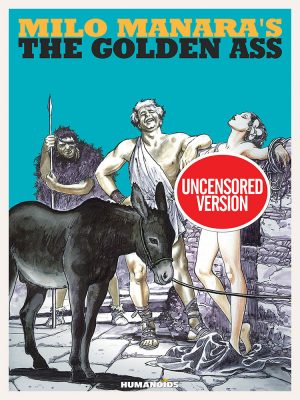 Before I dive into Milo Manara’s The Golden Ass, I will warn that unless you are: 1) familiar with Milo Manara’s work and like it or 2) willing to look at erotica for what it is and judge it from within the genre, that you will most likely disregard everything I say in the upcoming paragraphs, so let me assure you, I will not be offended if you navigate back to the FOG! homepage to find a buffet of more wholesome fun.

Sex is an enormous part of the Italian comics tradition. Satanik, Kriminal, and Valentina were outrageously successful when they arrived in the 1960s, and Milo Manara followed his career in this tradition but pushed the boundary for sexuality in comics even further. Milo Manara’s work does not dress up sexuality like Valentina; do not expect a psychedelic, art-nouveau wrapper that alludes to sex in any of Manara’s work. He serves up this three letter word, the one that has long troubled censors and rating boards here in America, unadorned on a silver platter for all of us to see and digest.

Well, this month, you can see all of the unabashed hedonism of The Golden Ass in full color, oversized, and completely uncensored. Even if you open up the book prepared, The Golden Ass will poke at any hint of prudishness you have; a hue of pale red will still grace your cheeks and a certain burning in your chest or stomach will emerge as you look at the pages because nothing is left unsaid or unshown in the Manara universe.

Built from the structure of Apuleius’s Metamorphoses (commonly called The Golden Ass), Manara’s interpretation of the ancient Roman novel takes the main character Lucius on an erotic voyage through Roman society when Lucius accidentally transforms himself into a donkey. As an ass, Lucius encounters a group of violent thieves, a loving married couple and their cruel son, a religious cult, a miller and his cruel wife and their oppressed slaves, and an aristocratic husband and wife. From each of these interactions with people he would not have met as a human, Lucius’s perspective on the world widens, giving him a better understanding of his own role in it.

While Metamorphoses itself has scandalous content, both text and images, Manara focuses his book on one thing: sensuality.

The plot of The Golden Ass, the graphic novel, exists to evoke sexuality. The explicit sex scenes do not interrupt a dramatic arc to distract or vice versa; they seamlessly integrate into the plot, and, unlike the generic pornography arc templates that exist (plumber, pool cleaner, pizza guy, etc.), the story arc of The Golden Ass and the sex scenes bolster each other, creating a graphic novel that conveys a sensuality so palpable and intense that it will leave you exhausted even though the book itself has less than sixty pages.

And of course, Manara’s artwork in The Golden Ass is exceptional.

When he wants to make men and women beautiful, they are breathtakingly gorgeous, and when he wants to make them sinister, they are physically as heinous as their empty souls. Though people’s faces and bodies certainly are Manara’s forte, in The Golden Ass, he exhibits his talents as a complete artist, presenting stunning renderings of landscapes and architecture, all in a minimal, muted color palette that makes everything feel like it was cast in Bernini white marble that Manara only occasionally (and very much intentionally) punctuates with a burst of a fuller, brighter color range.

Given Manara’s craft in the construction of his visuals and awareness of how sex can shape a narrative, The Golden Ass hearkens to the erotic cinema of the 1970s, those days when works of filth were made with attention and care and actually attempted to have real acting, scripts, and production value (I’ll let you pick or discover your own favorites). The Golden Ass is a great achievement of erotica and belongs in the high ranks of that once heralded cinema. It is not just sexy; it captures the entire essence of sex itself as a natural human instinct, a taboo topic, and a source of psychological and intellectual conflict.

The Golden Ass is honest and unapologetic yet never cold or distant in its presentation of sex, and that is fine by me, even though my stomach and face have the slightest burn as I bring this review to a close.