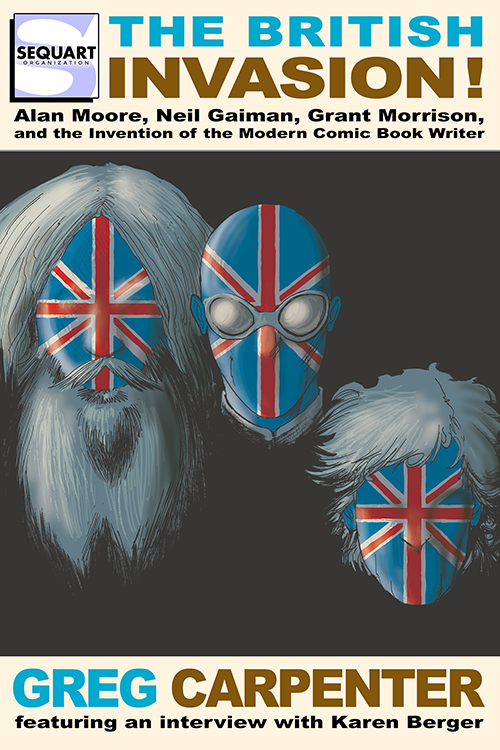 Sequart Organization is proud to announce the publication of The British Invasion: Alan Moore, Neil Gaiman, Grant Morrison, and the Invention of the Modern Comic Book Writer, by Greg Carpenter.

They came from Northampton, West Sussex, and Glasgow, and even though they spoke with different dialects, they gave American comics a new voice – one loud and clear enough to speak to the Postmodern world. Like a triple-helix strand of some advanced form of DNA, their careers have remained irrevocably intertwined. They go together, like Diz, Bird, and Monk… or like Kerouac, Burroughs, and Ginsberg… or like the Beatles, the Stones, and the Who.

Taken individually, their professional histories provide an incomplete picture of comics’ British Invasion, but together they redefined the concept of what it means to be a comic book writer. Collectively, their story is arguably the most important one of the modern comics era.

The British Invasion: Alan Moore, Neil Gaiman, Grant Morrison, and the Invention of the Modern Comic Book Writer runs 492 pages, making it the longest book Sequart has published. It features an interview with the legendary Karen Berger (who spearheaded the British Invasion at DC Comics), and it sports a fun “Meet the Beatles!”-esque cover by Kevin Colden.

The British Invasion is available in print and on Kindle. (Just a reminder: you don’t need a Kindle device to read Kindle-formatted books; you can download a free Kindle reader for most computers, phones, and tablets.) Find out more on the book’s official page.

About The Publisher:
Sequart Organization is devoted to the study of popular culture and the promotion of comic books as a legitimate art form. Sequart has released twenty-five books, seven documentaries, and thousands of online articles. Its documentaries include Neil Gaiman: Dream Dangerously, and its books include Our Sentence is Up: Seeing Grant Morrison’s The Invisibles.