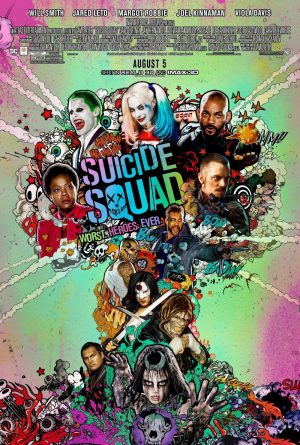 One thing we can all agree on is that the DC Cinematic Universe got off to a rocky start and seemed doomed with the release of Batman v Superman: Dawn of Justice.

The controversy won’t end with this film, but I can say writer/director David Ayer finally gets it. Nothing is ever perfect but this movie is more than what meets the eye from the promos.

The opening of the film introduces the players of Amanda Waller’s (Viola Davis) Task Force X in a series of individual (and quick) vignettes and we even get an appearance by Ben Affleck’s Batman early in the film.

As comparisons go, this is practically a new kind of movie. Deadpool had absurdist cursing and breaking the fourth wall. Captain America: Civil War pitted team against team. Batman v Superman introduces the idea of more metahumans in this world. What Suicide Squad does is lay out the crazy, pits the team against itself and goes all in on metahumans and specially skilled warriors.

Inevitably, the big star power does a lot of the heavy lifting. Leading the team of prisoners from Belle Reve prison are the standouts of the team; Will Smith (Deadshot), Harley Quinn (Margot Robbie) and personal favorite Joel Kinnaman (Rick Flag). Karen Fukuhara makes a killer debut as Katana, Jai Courtney as Captain Boomerang, Jay Hernandez as El Diablo and Adewale Akinnuoye-Agbaje rounds out the roster as Killer Croc. Cara Delevingne also stars as Enchantress, and of course Jared Leto is our new Puddin’, The Joker.

Contrary to the marketing, Joker and Enchantress, who both play a big part in the movie aren’t members of the Squad but play around the sandbox in a different way.

We see The Joker rise to power as a Gotham gangster with his former doctor Harley by his side.  Any criticism I have toward Leto and The Joker and this movie is all surface. They overdid it on the tattoos (they are fine, but too many, and the smile on his hand is way over the top), but overall he’s a decent Joker. He’s channeling Jokers before him while trying to make it his own. Given more screen time, I bet Leto would be able to flesh him out a bit more.

The Harley / Mr. J relationship hits all the right beats and feels as right as the animated series version. We’re even treated to a Harley origin we haven’t seen before, peppered throughout the movie. This is a great team movie, but at times, Ayer pushes the gorgeous Margot Robbie into the spotlight as the star.

Will Smith’s Deadshot is a cold blooded and precision assassin but they give him enough breathing room to be funny here, you forget that this is Will Smith in the roll and believe in the man behind the scope, Floyd Lawton.

When Enchantress turns bad and wreaks havoc on Midway City, the US government and A. R. G. U. S.  turn to Task Force X to break her down. This isn’t easy for Rick Flag, who has fallen in love with her alter-ego June Moone. Kinnaman is firm and a great military leader in this type of role. Rick Flag fits him better than the Robocop suit, but specifically fans of The Killing will appreciate how much screen time he gets in this movie as Suicide Squad leader. Both him and Waller have the ability to explode team member’s heads at anytime, as a red shirt Slipknot (Adam Beach) demonstrates.

Croc, Diablo, and Katana are also given times to shine and use their special abilities, watching Katana’s sword work is great. In fact, fight choreography was also fun to watch in this movie packed with plenty of action.

By the third act, we’ve seen a Patrick Bateman version of The Joker, supernatural monsters, tactical soldier strategy, actually funny jokes and tons of characters we’ve previously only seen in the comics books.

In a way also, this movie out-Ghostbusters Ghostbusters. Predictably, the city is almost destroyed at the end…and a big portal opens in the sky. Are we surprised at this point? Those are the new go-to moves.

Fortunately for the fans, Ayer and the creative forces behind the pages, likely Geoff Johns, and yes, Zack Snyder included plenty of easter eggs for the DC fan while making the whole experience special.

This is certainly not the Gotham of the Nolan-verse, it is closer to the world created in the Arkham video game series. There’s more rain, more grime and everyone’s dressed like a crazy person with access to a Black Amex at the worst mall in America.

Ayer has a hit on his hands, undeniably this is a fun movie that I don’t need to hate watch or re-watch to see if I ‘missed anything’ (Read: Batman v Superman). Suicide Squad rights the ship and sets the tone for what we have been teased from Comic Con with Justice League.

I will say that movies like Guardians of the Galaxy and Suicide Squad have one thing in common to their advantage. With no pre-expectations since no one knows as much about these characters from the start, the the actors can play around with what they are given. This is the opposite of what Cavill was handed with Superman, and that really hurt Man of Steel and Batman v Superman.