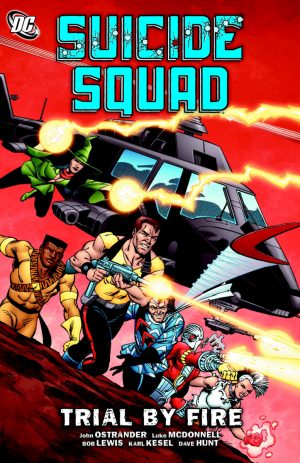 With the theatrical release of Suicide Squad in theaters this week, it’s only fitting that we go a little retro and explore the comic book origins of the murderous band of thieves and rogues.

I saw the movie last night and it was interesting to see the differences between what director David Ayer produced on screen and what writer John Ostrander presented on the printed page.

Everyone knows the story by now, but for the ill-informed, here’s a quick review. While held in captivity, some of the world’s most notorious super-villains are forced into the ultimate ultimatum by taking part in missions that are nearly impossible to survive. If one agrees, good. If one does not, they go anyway, and if you try to run…BOOM, your head explodes.

Sadly, there will be no mention of Harley Quinn since these stories take place prior to her first appearance in Batman: The Animated Series (1992).

Amanda Waller is front and center as the shrew and vindictive puppet master pulling the strings. While Waller doesn’t smile in the movie, she puts on a happy face while manipulating President Ronald Regan into approving the assembly of Task Force X.

The film gives audiences one big mission while Trial By Fire sets the reader up with several missions over the eight issues it collects. Ostrander takes full advantage of the political climate in the 1980’s with monstrous jihad terrorists and super-powered Russian soldiers that threaten the good name of democracy like never before. Heck, even the Female Furies of Apokolips get in on the action, which immediately increases the stakes.

Doing the government’s dirty work in order for time to be taken off of their sentences entices some of the world’s most dangerous criminals who are forced into this virtual no-win situation is standard fare in DC Comics lore.

When we see the team in the comics for the first time, the roster and some of their circumstances are a little different from the film. Deadshot is more of a prison trustee who operates in the field without an explosive device attached to his body.

Captain Boomerang is a conniving cutthroat who uses deadly boomerangs to get the job done…yes, it sounds silly, but it works There is no code among thieves with this Aussie as he is always looking for a way to escape from the clutches of Amanda Waller and his forced commitment to her expendable soldiers. In fact, the good captain sabotages missions to serve his own needs and if that’s not enough, he’s a little racist, too.

U.S. Commando Rick Flag is charged with keeping the squad of criminals in check, which comes with a lot of headaches. Flag’s motivations for agreeing to shepherd such devious souls stems from a sense of duty to his country along with trying to live up the legacy of his father. A generation earlier, Flag’s father led the first, and much different, incarnation of the Suicide Squad that was not comprised of villains. Flag’s romantic interests come into play in the film and in the comic, which brings about some interesting situations considering he is so gung-ho about following orders.

Movie trailers have revealed that the sword-wielding heroine known as Katana helps Flag keep the baddies inline, however, in 1987 the comics went with Bronze Tiger to be second in command. While he doesn’t appear on screen, he is the world’s greatest martial artist who is looking to atone for the vile acts he committed while being brainwashed by the League of Assassins.

Enchantress’ story/origin is pretty much the same, but giving any more notes and comparisons might give away more about the film than I want to spoil for our readers. Ostrander makes great use of her through the narrative while Luke McDonnell’s illustrations brings a sense of wonder and danger when she uses her powers to mess with people’s minds.

This collection is essential for any Suicide Squad fan.

The first adventures of the team’s modern incarnation along with the secret origin of the group’s ancestral roots will leave readers with a deeper appreciation for the characters and the overall mythos presented. The team is put through a wide array of situations during several missions, which tests the character’s physical and mental limits. Some can only take so much while others will fight until the bitter end in order to escape the confines of Louisiana’s Bell Reve Penitentiary.

War Wheels, time travel, an eclectic group of characters, and watching Amanda Waller lay the smackdown on absolutely anyone that gets in her way is more than worth the price of admission.