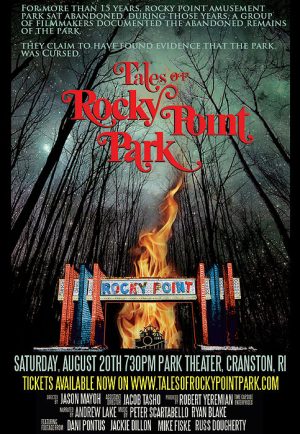 Passion can make any project top notch. So many times, that is missing from so many things: The simple pure passion of the creators. The new documentary film called Tales of Rocky Point Park has it in spades.

Directed with a keen eye by Jason Mayoh comes this fascinating documentary. For the uninitiated, Rocky Point Amusement Park was a local amusement park that many Rhode Islanders can’t forget about since it closed it’s doors. If you live in Rhode Island, you’ve either been there or heard people talk about it to an obsessive degree.

It is a cultural touchstone, a part of every Rhode Islander’s lives in one form or another.

A few years ago, a documentary about the heyday of the park came out called You Must Be This Tall; it was a film that was fun and breezy and nostalgic.

This film however digs deeper into the mythos of Rocky Point. It explores a lot of the tragedies that occurred as well as some of it’s rich history. It succeeds on many levels. Myself, I have been to the park many times, and even was there on it’s official last day of operation. Yet, I have never looked at Rocky Point quite like this.

The film theorizes that Rocky Point may have been a cursed amusement park. It does so in such a way through research and fact that it’s very convincing on it’s points. In fact, it may just horrify you to know some of these points.

The footage and documents shown here are amazing. This team did their job and show you things you remember and things you had no idea existed. Director Mayoh and his team pace it well too and I was riveted from the moment it started. What’s great is that when you watch this it’s actual history. And it’s so horrifying some of the stories in here.

Years ago Mayoh wrote and drew a Tales of Rocky Point Park comic book. I recognized some of the stories from there. He is a great artist, however, maybe his calling was as a film director. This is engaging stuff told in a riveting way.

Kudos too to Andrew Lake on the creepy narration; he has a great voice for this and he was perfectly chosen. Producer Robert Yeremian should be commended to taking a chance and producing a hell of a great documentary that is intelligent, fascinating, and is worth watching not just for the initiated, but for those who never heard of the park and this is their first ride behind the front gates.