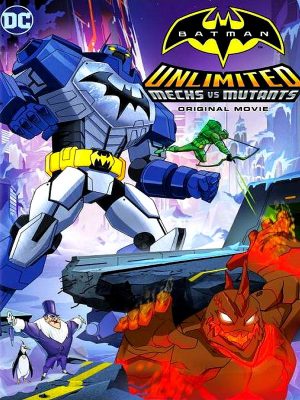 Batman Unlimited: Mechs vs. Mutants is half Batman and Batfamily adventure and half Godzilla movie. The chocolate and peanut butter work especially well this time around for Batman, Robin (Damian Wayne), Flash, and Green Arrow vs. Penguin, Bane, Chemo, Mr. Freeze and Clayface. This is the third in the non-Justice League Batman Unlimited direct to video animated films, improving a bit on the quality of storytelling over the previous two releases.

The Damian/Batman relationship is explored a bit here, in a surprising move that wholly embraces the current DC Rebirth status quo.

What is different here, and somewhat confusing to me at the beginning, was the fact that Damian is aged up from his usual 10-year-old self and is more of a teenager, fitting in line with the Robins before him.

There is no mention of Batman being Damian’s father, but it is hinted that he is the grandchild of Ra’s al Ghul when Robin awakens from a bad dream screaming, “Grandfather, NO!”. Pennyworth encourages Robin not to stay up too late studying to become Robin, as The Dark Knight has enrolled him into a “Robin Training Program”.

Will Friedle (Batman Beyond) appears as Nightwing and a simpatico brother to young Master Wayne.

When faced with the threats lobbied by a team-up of the exiled Penguin (Dana Snyder) and Mr. Freeze (Oded Fehr) who recruit Killer Croc, Chemo, Clayface and Bane, Batman and Robin enlist the aide of Leaguesters Flash (Charlie Schlatter) and Green Arrow (Chris Diamantopoulos). Good guys round out their team with Commissioner Gordon and Dr. Kirk Langstrom.

Genius scientist Victor Fries comes up with a formula to mix the compositional makeup of Bane, Chemo and Clayface to develop monsters capable of crushing cars and stomping through Gotham. Croc is the first to get juiced up, growing ten times his size and making the citizens of Gotham run for their lives. Of course, this is the Godzilla movie part, that frankly works pretty well.

What makes this Godzilla-type movie trope work really well is the cartooning and archetypes of these villains filling the Kaiju role.

Batman has no choice but the awesomest one, to fight size with size. Batman and Green Arrow are able to pilot their own Mech suits to punish the bad guys before they have a chance to destroy Gotham’s Police Department and the rest of the city. Green Arrow is even conscious of which buildings to destroy in the process (by asking the computer which ones he owns).

In all, this is at once a simplistic storyline with enough for a Batman: The Animated Series and current Justice League animated movie fans to glom on to. By placing a seed of doubt in Damian’s character early in the movie, he is able to redeem himself by playing detective himself and helping Batman problem solve. Green Arrow/Ollie Queen serves as a good uncle figure to Robin, who uses his years of experience dealing with Batman to assure Robin that he is important to the Batcave operations. Flash fulfills his normal role as comedian and lab scientist.

While not the grim and gritty (we’ve seen a bit too much of THAT Batman lately), this Batman Unlimited release schedule is turning out some decent storytelling. Of course, the allied bad guys find a way to stop getting along all together when the heroes’ strength lies in unity. While I was at first skeptical of the gigantic yellow Batsymbol on Bruce’s chest, it is growing on me, ever so slowly. Batman Unlimited: Mechs vs. Mutants is fun for most ages, riding the fine line between serving the fans and serving the general audience, and selling toys.

Will I break down and buy a Batman Unlimited action figure at Target? Maybe, but maybe not. That’s still up in the air, but I’ll be sold if the next Batman Unlimited story is as good as this one.