I’m in a great mood because Doom Patrol #1 came out and I loved it. Without further adieu, here goes! 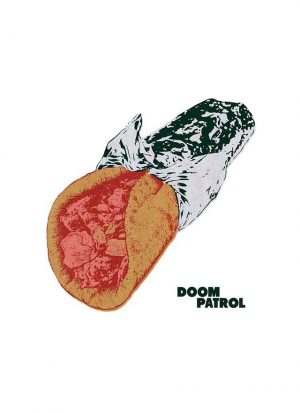 Doom Patrol #63 was the last time I enjoyed a Doom Patrol comic book. The end of Grant Morrison’s run actually made me cry it was so well done. Then…Nothing. People tried and failed to revive the book but it never quite worked. Then this happened.

Gerard Way may be the writer we have been waiting for. This is simply awesome. Doom Patrol always works at it’s best when it is weird and this is goddamn strange. It also feels like this comic should have been released right after Morrison’s run. It nods to Morrison, embraces the run, and then kicks off in a new direction.

The new character of Casey Brinke is great. She’s relatable and well developed and just charms. I loved everyone in this. Gerard Way should be commended for making me feel like I’m in high school again excited about comics. And Derington is a marvel. A great book. Pick this one up as it lives up to the hype and makes you remember why you love to read comic books. 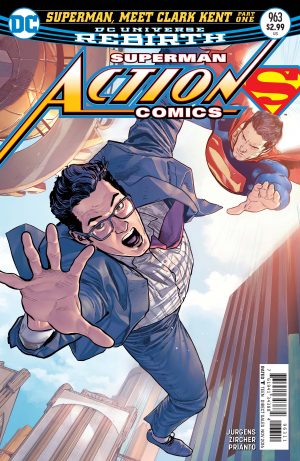 Dan Jurgens’ previous story on this title put me to sleep. Which is even more surprising that I liked this new issue so much. Maybe he reads my reviews and stepped it up(wishful thinking). Whatever happened this was pretty great from cover to cover.

In this issue, Jurgens focuses on Clark Kent in a strange new world. I don’t want to be the guy who gives it away, so I won’t. But this is very well done. I hope it continues. Jurgens shows us he may still have some gas left in the tank as a writer. And Zircher does a great job as always on art.

Who knows? Maybe they have a plan in mind to make Superman interesting again. This issue certainly made me enjoy it and want more.

I’m even looking forward to the next issue. Who would have thought? 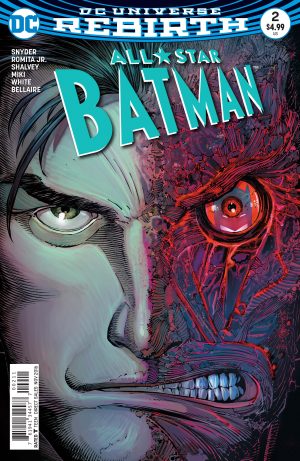 Scott Snyder is so incredibly talented. Here he just excels beyond anything we have seen him do before. It’s a different title than maybe a lot of us were expecting…But quite frankly it’s awesome and I wouldn’t have it any other way.

Batman and Two-Face continue along their road journey here.

It’s fun, dark, and strangely funny. My only gripe so that I wish I could read this all in one sitting, the entire tale. But I will when it’s done (much like Doom Patrol)

The art is pretty decent too, though I wish Shalvey had the main story and Romita Jr. had the backup. Still it’s a strong book overall. Now bring on the rest of the story! 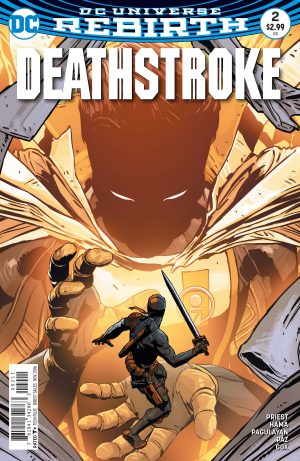 Another great issue in the DC Rebirth! I’m loving this title. It’s funny how there are some AMAZING books in the Rebirth line now and some that are just puttering along. This is super good though.

The reason is Christopher Priest first of all. He writes everything with a certain quality and this is no different. The story is fast paced, action packed, and has humor. Slade has never been more evil and I love it.

The art is pretty special too. Pagulayan really has his stuff down. The breakdowns here were by the legendary Larry Hama and that was just plain awesome.

One of the best books of the Rebirth. Well worth picking up. 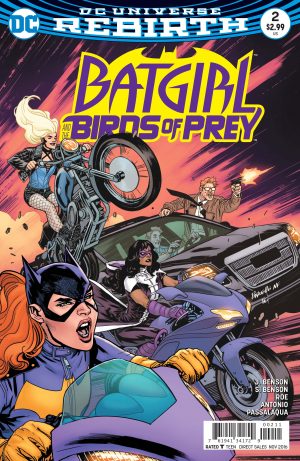 Batgirl and the Birds of Prey #2

I don’t know. This is a decent book. If you are a fan pick it up. You won’t be disappointed.

Compared to the other titles (the first four reviewed) this is less strong than those. Not that this is bad, but the others wowed. This was just decent.

The writing is pretty solid and they have the characters down. And the art was actually above average for sure. It’s just I’m not feeling it like I want to.

I wish there was more heft to it overall.

Still, if you’re a fan pick it up. It’s fairly good. If not, pick up one of the first four books reviewed instead. 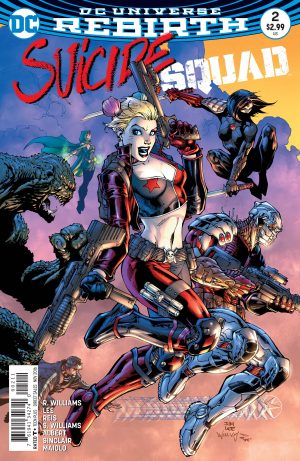 Man, Suicide Squad is one of the biggest disappointments of the year, both the film and now the comic book.

This title can be great. So why isn’t it?

Simple. They are trying to turn it into something it’s not.

Suicide Squad is at it’s best when the characters are dealing with the stuff that is too gritty for superheroes to actually do. The Black Ops. The ones nobody talks about.

They shouldn’t be doing the job that Superman can do. Otherwise there is no point. Williams and Lee effectively bore on both story and art.

It should be exciting. It’s not.

The backup story with art by Reis is better, but I think they should really cancel this and start up again with either John Ostrander or Adam L. Glass writing. Those were some good Suicide Squad books right there. 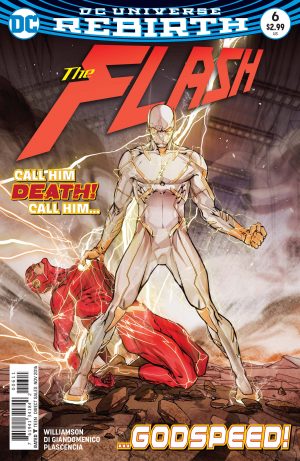 This issue introduces the character named Godspeed and he’s actually a hell of a villain. This is just the first part of the story but it’s a rousing, scary start.

Godspeed actually seems like a real threat, a well thought out  character.

Williamson continues to impress writing this title. He has found his groove and it’s fantastic. The art though is crackling. Everything in this issue is well drawn and I am in love with this artist. 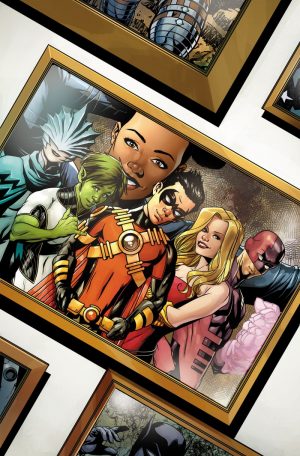 It’s the last issue of Teen Titans before the Rebirth…I think.

When DC published Rebirth there were a few loose ends so this is the book that finishes the run in the New 53 (I think).

Well, if you were wondering how this ends then pick it up. Will the Titans go their separate ways? I’ll be honest, it’s hard to muster up the energy to get excited about this.

The Titans are already going in a new Rebirth title that’s pretty decent. Still I commend DC for giving them a chance to finish their run.

Bedard is a decent enough writer to make the title finish on an okay note. Churchill is a decent enough artist to make this worthwhile. If you read the New 52 Titans and want to finish it up, now’s your chance. But I totally understand if you don’t and feel it won’t really matter in the long run. 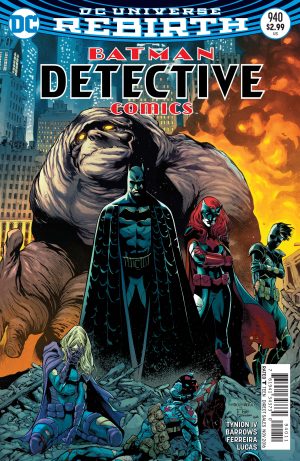 Man, if they keep Eddy Barrows on the art duties for this title, I’m in 100 percent. Tynion isn’t a half bad writer when he’s got a decent artist. And Barrows is more than that. He makes the book sing.

The Rise of the Batman story has ha it’s ups and downs. This however is an up. In fact every issue with Barrows is. He has come into his own in Detective and shows what he can do. This was awesome.

Tynion wrote an emotional story here. It translates wonderfully. There is a moment that is so emotional with Batman but it’s not forced. It’s just nice to read.

The biggest shocker is that this might actually have to do with the Rebirth story and (SPOILER) we see a hint of Watchmen here. Thank god. I was wondering when it was going to start appearing again.

A great ending to a first arc. Keep it coming. And keep Barrows drawing this book.

I have been having a hard time reviewing some books for DC recently. Most of them are solidly crafted…It’s just tough for me to write a review mostly because they don’t do anything great. They are GOOD. But not great. And then it becomes tough to invest any energy in them. So here’s a one sentence review of each with a rating next to them:

Green Lanterns #6
Written by Sam Humphries
Art by Will Conrad and Jack Herbert
Hardcore fans only. Not bad. Not my cup of tea.
RATING: C+

Gotham Academy: Second Semester #1
Written by Brenden Fletcher and Becky Cloonan and Karl Kerschl
Illustrated by Adam Archer
Actually a lot of fun. Again, not in my wheelhouse but enjoyable enough.
RATING: B

Hal Jordan and the Green Lantern Corps  #4
Written by Robert Venditti
Illustrated by Ethan Van Sciver
I’m bored from start to finish. I don’t recognize this anymore. I wish I did.
RATING: C

Red Hood and the Outsiders #2
Written by Scott Lobdell
Illustrated by Dexter Soy
Funny, fun. I enjoyed it enough. Not something I read before doing reviews but hey.
RATING: B

Earth 2 Society  #16
Written by Dan Abnett
Illustrated by Angel Hernandez
If you like this book you’ll love it. If you are not a reader, it’s next to impenetrable.
RATING:B-

New Super-Man #3
Written by Gene Luen Yang
Illustrated by Viktor Bogdanovic
I’m not a fan of this new take on Superman. I am a fan however, of how kids can pick this up and find it relatable.
RATING: B-

Superwoman #2
Written and Illustrated by Phil Jimenez
This is just a cluster of I don’t know what. I can’t muster up any energy to be interested.
RATING: C

Wonder Woman #6
Written By Greg Rucka
Illustrated by Nicola Scott
The best of the bunch, only thwarted by a crazy publishing schedule. Maybe I’ll read once both storylines wrap.
RATING: B