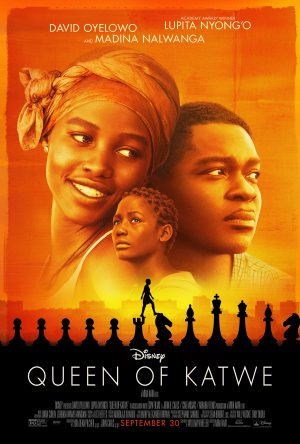 The inspirational true story of Phiona Mutesi, a girl from the slums of Katwe in Uganda who became a Chess Grand Master makes for a winning, family-friendly Disney film.

Newcomer Madina Nalwanga stars as Phiona and David Oyelowo (Selma) stars as the mentor who teachers her chess and Lupita Nyong’o plays her mother Nakku Harriet, who doesn’t see the value in something so trivial when her daughter could be helping put food on the table.

In this case “food on the table” is a woeful metaphor, because the fatherless family (dad tragically died young) rents a sad hovel that doesn’t even have four full walls and a roof, let alone a table or beds. Their poverty is staggering, especially when you learn the film was shot in the real slums of Katwe (as well as in Johannesburg, South Africa).

Besides the mostly solemn, determined Phiona, the children (all who have never acted before) are a delight, including Ethan Nazario Lubega as pint-sized Benjamin and Nikita Waligwa as pig-tailed Gloria.

Oscar winner Nyong’o’s face is largest on the movie’s poster and she’s both fierce and funny as Phiona’s overprotective mother. But the film really belongs to Oyelowo, whose warmth and dedication to his kids is the heart of the movie, especially when he turns down a better job to stay with his kids.

Two standout scenes: When he sidesteps the organizer of a prestigious chess competition into letting his “slum children” participate and when the children are intimidated by their more privileged competitors and want to go home — he nods and then makes them laugh with a story about a hungry dog he saw chasing a cat. “The dog was running for a meal, but the cat was running for his life,” he tells them and the kids have not only found their motivation, but a new nickname, Katwe Cats. Naturally, they walk away with their first of many trophies and a newfound sense of pride and purpose.

In the film’s inevitable march to a happy ending where Phiona becomes a world-renowned Chess Grand Master, there are several setbacks. A little too much time is spent showing her frustration when she’s forced to return to Katwe after having seen a better life beyond its slums. And a melodramatic subplot with her older sister could easily have been cut.

But that’s a small quibble for an otherwise thoroughly enjoyable film that will send you out with a smile, thanks to the triumphant last chess match and a fantastic end-credit sequence where we meet the real Phiona.