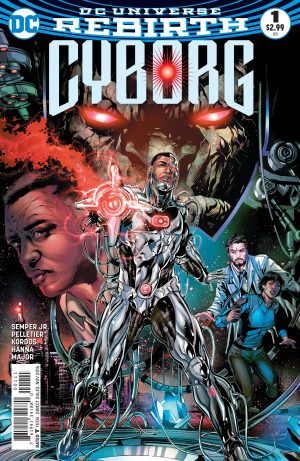 THE IMITATION OF LIFE – PART ONE: AWAKENING

The strange cybernetic man that has been monitoring Vic Stone hunts through a warehouse full of discarded robotics. Upon finding a behemoth of a robot he activates it ready to raise the stakes in his plan.

Meanwhile police are in pursuit of a stolen armoured car. To their surprise their cellphones begin ringing and their sat nav switches on directing them into a head on collision with Cyborg himself!

Vic reveals how by tracking credit cards he was able to access their transactions and further to that, their criminal records. Handing the two bungling robbers to the police, Vic returns to S.T.A.R. Labs. A warm welcome is far from coming as Silas Stone, Vic’s father gives his son a telling off for ripping apart a hydraulic to intercept the robbers.

Tom and Sarah run diagnostics on a reluctant Vic. While Tom takes Silas aside an angry Vic is convinced by Sarah to clear his head by leaving the lab with her in disguise. Vic then thinks back to his fight with the monstrous Malware and the discovery of a secret data bank which held secrets to his beginnings, but more than that, it contained a secret journal.

The audio recording revealed Silas was unsure if his son was saved or some kind or replicant. Vic was hurt by the recording but even more because he is not sure his fathers doubts were unfounded.

Sarah convinces Vic to forget about ‘processing fuel’ and instead, enjoy the pleasure of his favourite ice cream. Some curious children see through his disguise and in a rare moment of fandom without the League, Vic poses with the children for photos with their favourite hero. Even that moment turns sour when they make a remark abut him not having a heart.

A broken man, Vic sinks deeper into depression as they walk home and pass a church that the Stone family once frequented but now neglect. Sarah decides to stop the pity party and drags her friend into a jazz club.

Inside lead singer of Sarah’s favourite band Brother Blue takes the hero aside and makes him realise that the soul is beyond biology, beyond technology… and when Brother Blue begins to play it reaches out to Vic and he finally feels good and human once more, not just a cyborg.

The feeling of humanity is short lived. The robot that was activated earlier leaps into conflict with Vic swearing to kill his human side so the alien tech can be free of it’s ‘biological ‘virus’.

Sarah watches is terror as newly revealed Kilg%re is ready to kill Vic just as he had literally had an awakening!

A very emotional beginning, Vic comes across as a tad immature emotionally, and I must confess I am just more a fan of Cyborg being a Teen Titan rather than a Leaguer. The revelations of his fathers secret journal and how it shaped the direction of the story and character is a welcome dimension to the character that has previously either been ignored, side tracked or brushed off.

Brother Blue, the Jazz lounge singer reaching out to Vic is a beautiful scene and poignant. Semper balances the drama and action very well. The drama doesn’t feel too slow or layered on too thick and the action not to sparingly.

There are many parallels between Kilg%re and the recent arc in Superman with another cybernetic foe, The Eradicator, but the drama and depression or poor Vic as a modern day Frankenstein’s monster sets it apart.

I like that he was pulled out of the self-doubt and hope that Vic continues to grow. But I would also enjoy seeing more of Silas, Tom and Sarah as the series continues. As I said I’ve only ever been a fan of his original adventures but now I’m actually looking forward to reading more of his new adventures.

I first came across Paul Pelletier during his time at Malibu comics and then during his stint on Incredible Hulk. His style is vastly different these days and it looks even more amazing than his early works. Usually second or third or even fourth tier characters in comics don’t get the top creative talent but I’m glad that a) Cyborg is being elevated creatively. Marv Wolfaman & George Perez’s cybernetic superhero is enjoying a new resurgence and it’s a worthy ‘rebirth’

I would definitely watch the movie, but right now I am really enjoying the book.

Will Conrad and Ivan Nunes have given this issue one a breathtaking first cover!

This cover just didn’t connect with me, its not that it isn’t cool, not that it isn’t slick, it is just that it is too busy. Personal preference but If it was just a little less ‘energetic’ it would have worked a little better for me. Not Carlos D’anda’s fault, I think it is more to do with some of the colouring over-saturating it.

In this article:Book/Comic Review, Comic Books/Strips, DC Comics, Welcome to The Planet