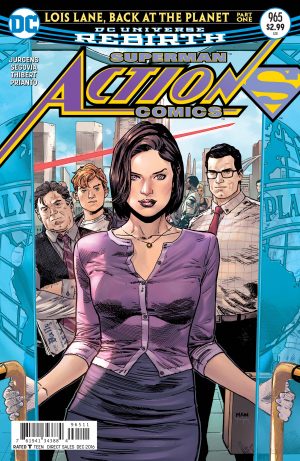 Lois Smith now masquerading as Lois Lane nervously heads into the Daily Planet. A strange sensation as everything is almost exactly the same as on her Earth only with slight tweaks, like Planeteer Jackee and no Cat Grant on staff.

Jimmy tries to fill her in on what she has missed while vanishing for a few weeks. He doesn’t confide to her that he knows Clark’s secret, but then on this earth, Lois and Clark never loved each other. Nobody seems to notice that she’s older or that her hair has changed colour but of all the people in the Planet, Perry would be the one to notice.

Smith’s mind wanders to a dream she had last night where Lois Lane of this earth is writing up something on her laptop but it is so big she needs the other Lois Lane’s help.

Lois wakes up near the secret tunnel in Hamilton County and meets Clark back from Metropolis. Clark fills his wife in on the missing Geneticron building and his doppelganger, but Lex Luthor’s arrival in the Super armour interrupted him. Between a completely human Clark Kent and Lex being a Superman, it feels to Clark Smith like his old life has been taken away.

He mourns the life they created in California but Lois tells him when Jon was young it was a good fit but now they have to step up. They were already comfortable but aspects of their life still crept in. Clark secretly did super feats and Lois wrote secret novels and articles under a pseudonym.

Lois reveals that somehow the Lois of this earth tracked her down and sent her a strange coded letter. Jon runs up to them with Kathy in tow complaining about how he too misses California and Lois tells him of her life as an army brat. Turning to Clark after the children race inside, Lois shows the note and quickly hatches a plan, one that could perhaps allow her to be an investigative reporter again. Lois theorises that the letters code is an account password and if she could just log onto her doppelgangers computer. One bullet train later and we are back to today…

Lois enters Perry’s office only to be met by an aggravated editor in chief and a new publisher, Lex Luthor. Perry’s anger prevents him from seeing Lois’s subtle differences and she uses the final days of Superman as an excuse for being absent from work. Lex steps in and fills her in on his new career as a Superman and publisher instructing Lois to get over her recent writer’s block by exposing the new Superman. Like it or not she was Lois Lane now albeit with a secret identity of sorts.

Lois heads into ‘her’ office only for ‘Clark’ to interrupt he questions Lois for vanishing, for her jeopardising the Geneticron investigation by falsely exposing him as Superman. Lois refuses to elaborate and in a rage a clumsy Clark spills his coffee all over Lois’ computer. The computer is destroyed but Lois then remembers a vision of Lois at her laptop and races to her apartment to check it. Lois is freaked out that the apartment and memories are almost identical to her own and wonders why Lois sent her the clues instead of Clark or Perry but she doesn’t have much time to ponder as Superwoman appears and she knows Lois Smith is an imposter!

As much as Superman is a ‘super’ man, he is much less ‘super’ without Lois Lane. I’m glad that she’s back. Thank you Dan Jurgens.

The “Who is Clark Kent?” story may have ended a bit of a damp squib, with nothing really resolved but just as I mentioned Lois was being underused, here we have the Lois Lane we know and love back in the action and with a mystery to solve! Lois taking centre stage this issue proves the book is ready to embrace her character again.

I thoroughly enjoy that Dan Jurgens can weave in all the character moments, have little to no action but create a story that has a feeling of breaking new ground and is truly compelling. The Superman books haven’t been this good for years.

Stephen Segovia and Art Thibert do for Lois Lane what Dan Jurgens is doing for the writing. The panels are clear, crisp and well constructed. Nothing is too busy and the text doesn’t feel squashed. Superman may have hardly been in the issue but it didn’t feel any less ‘Super’ to me!

As eye catching covers go this is one of the best. Lois Lane front and centre, literally back at the Planet. The artwork is smooth, clear and eye catching with Superman faintly in the distance. This cover proves Lois is more than just a side character – she’s the lead.

A fun, classic take on Lois.

Exuberant, confident and a return to action. Lois you’ve been sorely missed and here Gary Frank and Brad Anderson don’t shy away from what makes her character great. Bravo! I look forward to more of Lois in the Superman books.