For this installment of Cool Shirts, I took a look at some of the shirts from 80sTees, which was the first 80s memorabilia online store and has now become a prime destination for pop culture tribes everywhere to come together and share their geekery!

These are a few of my recent favorites:

If you grew up in the Seventies and Eighties, Kenner not only represented toys, but the best toys.

Among the classic toys produced by the company were Play-Doh, Baby Alive, Spirograph, Girder and Panel Building Sets, Easy Bake Oven, Hugo – Man of a Thousand Faces, and the Zoom-Loom Automatic Weaving Machine.

But they also tackled action figures where the company made their mark; launching such lines as Strawberry Shortcake, Care Bears, The Bionic Woman and Littlest Pet Shop aimed toward the girl’s market and The Six Million Dollar Man, Batman, M.A.S.K., Raiders of the Lost Ark, The Real Ghostbusters, Siverhawks, The Super Powers line and VR Troopers for boys.

The company is best remembered for their connection to the biggest pop culture franchise, Star Wars.

Beginning with their “Early Bird Certificate Package,” Kenner began a relationship with Star Wars that began in 1977 and ran through Kenner’s sale to Tonka in 1987 and subsequently by Hasbro in 1991 during which they released hundreds of figures and vehicles.

This shirt not only represents nostalgia, but history. 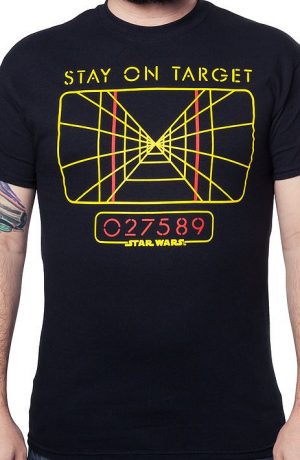 Speaking of Star Wars, this amazing shirt invokes not only the classic film, reproducing the X-Wing Fighter’s targeting computer as the Rebellion flies through the Death Star trench toward the exhaust port (which is just slightly smaller than the Womp Rats found in Beggar’s Canyon on Tatooine), but also, the amazing video game produced in Vector Vision, which in my opinion is still one of the best games ever produced.

Whether you’re Biggs Darklighter, Wedge Antilles, Jeb Porkins or Luke Skywalker, this shirt is a must have for every fan of the original trilogy.

So, grab one of these shirts, listen to that voice in your head, move away your targeting device, take a deep breath, and fire.

The Force will be with you.  Always. 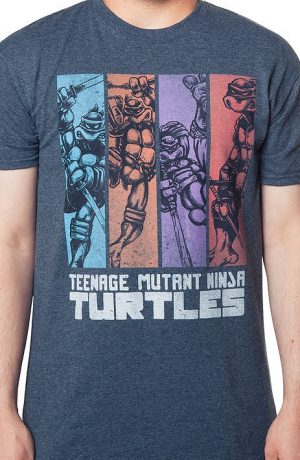 It’s hard to believe that it’s been over thirty years that I first became aware of The Turtles with the release of the comic by Kevin Eastman and Peter Laird.  Originally released in black and white, the comic was a parody/homage to Frank Miller’s Daredevil and Ronin runs, as well as Marvel’s New Mutants and Dave Sim’s Cerebus The Aarkvark.

There was no pizza or surfing in the original incarnation, with Leonardo, Donatello, Michelangelo and Raphael fighting crime in the seedy streets of New York.  As a matter of fact, the characters were indistinguishable with the exception of their weapons.

When the characters came to animation, the color of their masks distinguished them from one another.  This amazing shirt features the original comic incarnations set against their individual colors as presented in the animated series.

Whether a fan of the comic, the movies, the animated series or the toys, The Turtles remain awesome .  Cowabunga, indeed. 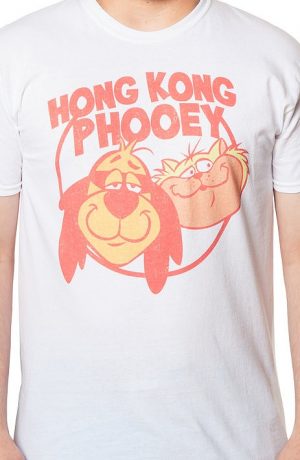 It might have only lasted sixteen episodes, but Hong Kong Phooey brought martial arts to Saturday morning television.

The series centered on police station “mild-mannered” janitor Penrod “Penry” Pooch (voiced by the inimitable Scatman Crothers), who would don the secret identity of Hong Kong Phooey when reports of crime came into the station.

As the phone would ring, telephone operator Rosemary would answer the call and explain the crime to Sergeant Flint, and Penry would leap into action, slipping behind the vending machine, into the bottom drawer of his filing cabinet, and with the assistance of Spot, explode out of the top drawer wearing his mask and costume ready to fight the forces of evil.

Armed with is copy of his correspondence-course martial-arts instruction handbook, The Hong Kong Book of Kung Fu and his Phooeymobile, the canine crimefighter proves time and time again that he’s not only faster than the human eye, but also the number one super guy! 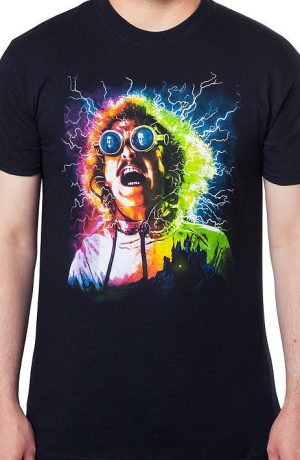 Not only is Mel Brooks’ Young Frankenstein one of the funniest films ever made, but with the recent passing of the great Gene Wilder, this shirt belongs in the collection of every single cinegeek.

Capturing Wilder at the great Dr. Frederick Frankenstein (pronounced “Fronken-steen”), this shirt also captures the reflections of both the Monster (Peter Boyle) and Igor (Marty Feldman).

With a color palette that literally explodes off the shirt, this design is a wonderful tribute to both the film and the legacy and talent of the magical Gene Wilder aka Frederick Frankenstein, Leo Bloom, Willy Wonka, and The Waco Kid.