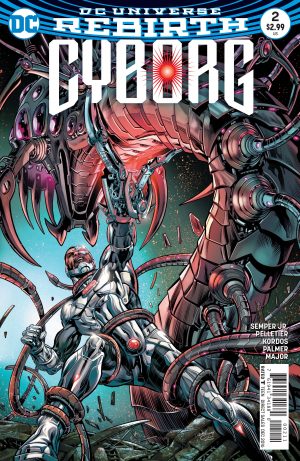 Cyborg is ready to accept the fight with Kilg%re but asks that Sarah be released. The android laughs off the request and mentions that he can access all content in Cyborg’s massive digital database and that probing him for information is needless.

He reveals that he was alien tech similar to his Vic’s own.

Upon arrival he discovered much like Metallo in Metropolis, he could control anything mechanical or electrical.

Vic fights off Kilg%re but by the time they reach the top of a building construction site and a stalemate, the android drops Sarah over the side. Vic with his affection for human life does exactly what Kilg%re thought and leaps to her rescue.

With Sarah safe Vic asks for her to return to S.T.A.R. and contact Silas while he pursues their attacker. It is all a ruse as Srah grabs her cellphone to call Silas and gives Kilg%re a direct line to Cyborg’s father.

Simultaneously He delivers a message that his leader wants to set him free. The mysterious leader has been gathering powerful machines, discarded over time and reactivated them for a higher purpose. The purpose will elude Vic unless he survives their fight.

Taking inspiration from Kilg%re and his powers Sarah uses the CCTV and orbiting satellites to track the villain for Vic. In a shocking twist the android has stopped atop the Stone’s former church. Kilg%re grabs Vic and taps into his brain, projecting images into his mind.

The images tell the story of machines lives as slaves to humankind until the digital age tipped the scales in their favour. Kig%re reaches out to Vic, to join the machines but Vic reminds his foe he is part human. Kilg%re reveals he was scanning the conversation with Vic and Blue about being human and even the content of Silas’ audio journal.

Vic is utterly conflicted deep down and as a torturous game he unveils Silas with a bomb implanted in his chest and trapped in a glass orb filled with alien machinery corroding gas. If Vic saves his father his machinery will die. If he leaves his father to die he is pure machinery like the leader had theorised.

Naturally Vic breaks his restraints and gets his father to safety. Vic makes peace with his father and hopes he will go to heaven to be with his mother but Kilg%re tells him that the gas though strong is not long lasting and he will begin self-repairing. Since he proved himself more human however Kilg%re must kill him before he interferes with their cause.

A city wide blackout interrupts them and Sarah radios in that S.T.A.R. has hacked into the city power grid and cut it off. With no electricity to aid him Kilg%re has only his on board power. Vic uses the opportunity to destroy the android leaving only a pile of scrap.

Vic picks up his father and carries him home. The fight, for now, is over…

…except it isn’t. Captive and watching everything on a video screen is Silas Stone! He screams that an imposter has taken his place but nobody can here his plea for help.

If the heartfelt drama and emotional exploration was too much for you, the switch is well and truly flipped to action by Semper. Kilg%re may, even for an alien, sport a stereotypical villain trait to reveal too much but the action more than makes up for his excessive talk. I like that there is now a direction for the strange leader, and a path for Vic to follow along with that twist at the end! The only niggle I have is that the bomb in Silas’ chest is still active.

As with most tech based comics, sometimes the art can suffer from ‘tech overload’ there is a little here with Kilg%re’s excessive tendrils. The action still helps to rescue it with it’s fast pace. I would like a balance between the drama and the action so I hope Pelletier continues his superb renditions.

To be expected in a tech based comic but it just swamps the cover. It is a cool fight just a but overpowering, especially for a cover. The previews had it garishly coloured so I’m glad that the palette has been knocked back for publication.

Jinkies! I was just talking technology overload for a cover but this is ridiculous! 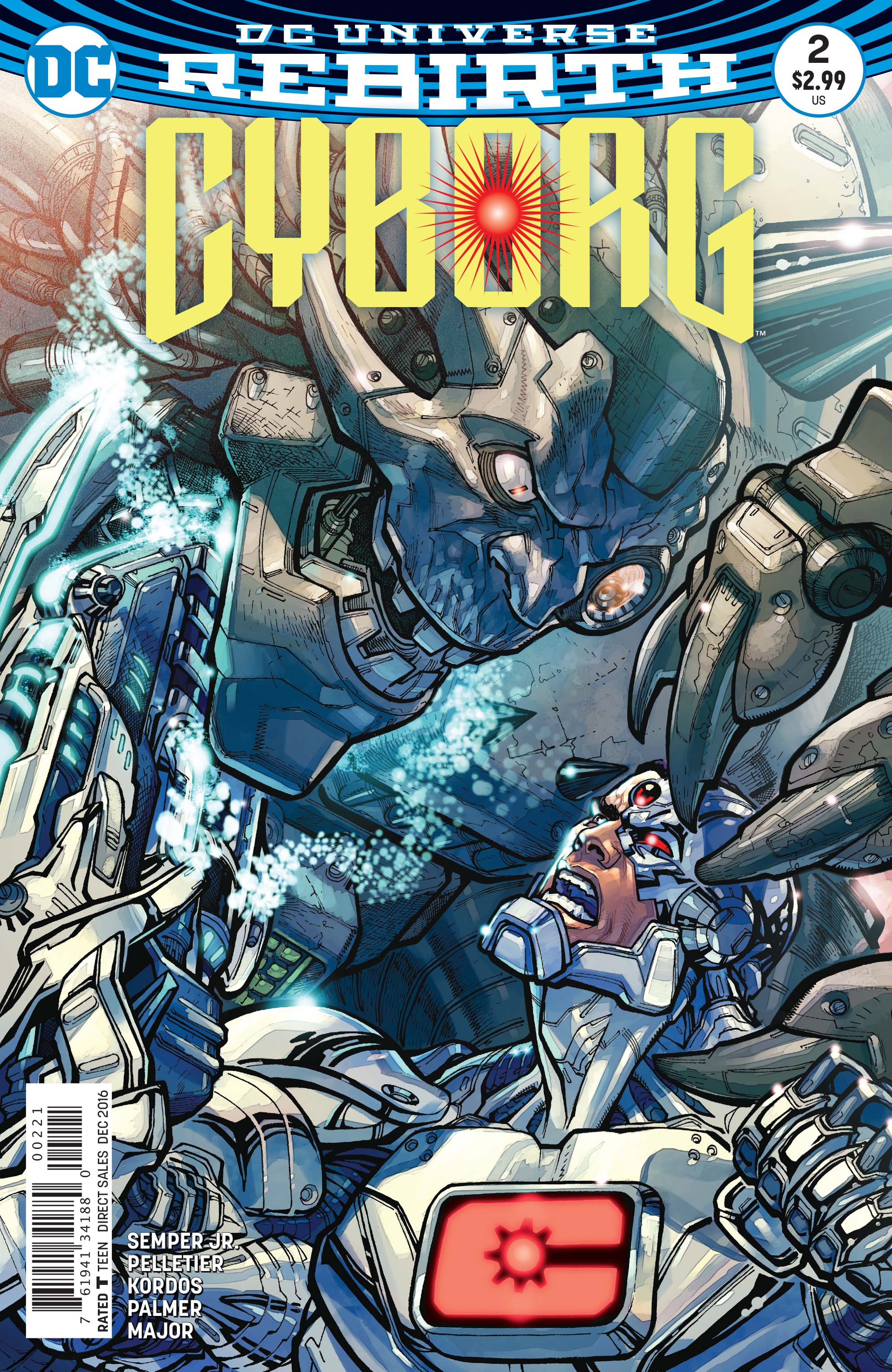 Where does one foe start and the other end?

In this article:Book/Comic Review, Comic Books/Strips, Cyborg, Rebirth, Welcome to The Planet