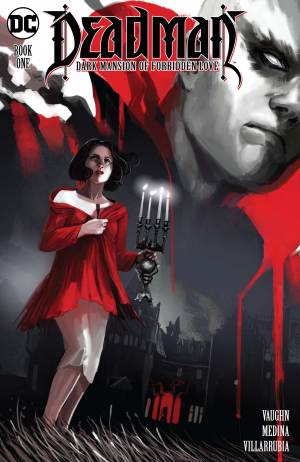 CHAPTER ONE: A HOUSE AWAKENS

A storm awakens a frightened spirit at Glencourt Manor at the some moment that Sam and her friend Berenice also approach. Returning from an antiques auction they don’t realise they Deadman has been following them home.

As they dry off Berenice realises she can see Boston Brand trying to possess Sam, but to his shock he is knocked back. Berenice grabs Sam under the pretence of needing some fresh air trying hard to ignore Boston.

Berenice recalls her first memories, how a ghost appeared to her as an infant and how her mother also shared the gift. When she awakens from her trance Sam tells her she had been repeating that someone had called out to her and she had come to the Manor to help them.

Boston, listening to everything looks at the portrait of the Lady of the Manor and realises Berenice can not only see and hear him but other spirits as well. Nathan, her partner tries to reassure her that her nerves are getting the better of her.

Nathan begins getting a migraine and at the same time the vision of a spirit clouded in shadows calls our to Berenice. It warns her that the house will destroy her and her reputation. As it pulls away Boston leaps forward determined to find answers.

Once away from Sam the couple talk about the increasing sickness Nathan seems to be suffering. Berenice believes that it might be the house, especially after the warning. She worries about Nathan discovering her ability as she makes her way back to Sam in the family room. The spirit, however, reawakens and follows her as she picks up pace.

Berenice arrives in the hallway to see Deadman punching at the front door but being held back by some kind of spiritual barrier. Berenice runs to Sam for a moment of normalcy but he shows her that the bowl she had been so excited about the auction had gotten smashed. Another vision resurfaces. At the auction the bowl reached out to her emitting happy thoughts but now it has been broken and the emotion has left it.

To Berenice’s surprise the spirit manages to fin a way inside the room and warns her off again. Boston leaps forward and tries to protect them from the spiritual black fog surrounding them.

The fog and Deadman find themselves an even match and the strange foe pulls back to escape. Boston however is in pursuit but is locked out of a room like before.

Sam notices the door slam but is oblivious to the spirits roaming. Finding that he can’t pass through the walls in the Manor like he usually can Boston decides to possess the nearest human, the woman Berenice but as he does everything goes black.

A memory of hers surfaces once more and we see Berenice passing on a message from her girlfriends dead mother. How it caused her life to fall apart before. Boston is now in control and makes excuses to Sam to head back to the door. Sam is surprised as he watches Berenice suddenly exhibit athleticism and race to the door. Boston finds he is trapped as magic has sealed the house like a trap.

When Sam approaches demanding answers and holds his friends hand, Boston finds himself forced out of the body. Sam and Berenice share a moment but she cuts it short and asks her to leave, broken bowl in hand.

Berenice turns on Boston once Sam has left.

Boston reveals that he senses the distress of the a spirit, followed it to house but can only usually interact with the living by possession. He asks an angry Berenice for permission to do so if she is ever in trouble but she refuses.

The two head up to the attic for answers and come across a chest and when they open it they discover it full of items belonging to the woman in the portrait. They discover her name is Adelia Ruskin and opening a ring box they discover a gold band and hair inside.

Adelia appears but has no memory of her death or why she is trapped there. Boston reaches out to her and assures her they are trying to help. Dark   ddddddness envelops them and they vanish leaving Berenice alone in the attic.

There is definitely a dark vibe with the story. It is at its heart a ghost story and suitably spooky. However this is more the story of Berenice and her mystery. Deadman is very much along for the ride. This is disappointing as Deadman is at the sidelines throughout most of the story. I don’t care about Nathan, Sam, Tala mostly because they don’t actually function as characters. Only Sam with her spiritual repentance has any kind of validation as a character. As the story unfolds I’m sure they will all be fleshed out but right now I’m not invested in the story. I feel like Boston Brand right now… a ghost watching from the outside.

It is a beautifully illustrated book balancing fine linework, painted art and digital overlays that fits very well with the ghostly story. Some of the art is a bit confusing but I think that comes more from the story construct being confusing itself.

An enticing and spooky cover that really sells the story.

A little misleading but as a cover it is a stunning piece of art.