The Graphic Breakdown hit NYCC yesterday, but that couldn’t keep me away from reviewing even more books as we head into the weekend.

Not in New York?  Then hit your local comic store and check out some of my recommendations! 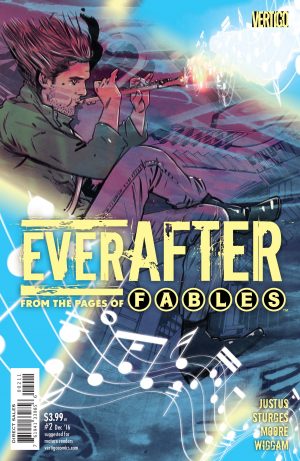 I may be one of the few people in the world who didn’t finish reading Fables. I know I know. I just grew quickly bored with the concept after issue 25. However, I am enjoying this spinoff quite a bit.

Connor Wolf’s initiation begins as the rest of the Shadow Players regroup and grapple with the fallout from Hansel’s gut-wrenching incident during their recent failed assignment. Tension builds as Feathertop ignores the team’s pleas to complete the mission, and Peter adjusts to Connor’s bravado when the two are sent on reconnaissance to thwart a group of mercenaries who have stolen invaluable—and powerful—Native American artifacts from exhibits across the country.

It is a tensely written story that keeps you on your toes. I liked the way the first issue ended and it lead to this one perfectly. The art is also well suited for this story. Seriously good stuff.

If you are looking for a comic off the beaten path pick this up. And it’s standalone so far it seems so you won’t get bogged down with tons of backstory. 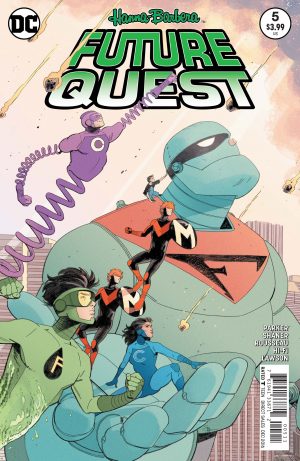 Well, the Hanna Barbera books on the DC line have pretty much been a miss with the exception of this title. This has been pretty cool from the beginning and quite enjoyable overall. The credit of that goes to writer Jeff Parker and his artistic teams that have worked on this.

Team Quest is dealt a serious blow at the hands of FEAR just as Omnikron starts rebuilding itself on Earth—out of anything living that comes too close! Inter-Nation’s Deva Sumadi takes charge and splits the group up to go recruit more forces to take on the alien supercreature.

It’s time to go on tour with The Impossibles and meet the biggest fighting force in the world, Frankenstein, Jr.!

This is a good book. Good for all ages. It won’t change the world but it will make you smile. I look forward to this when I see it come on. Maybe they should let Parker take over the whole line? 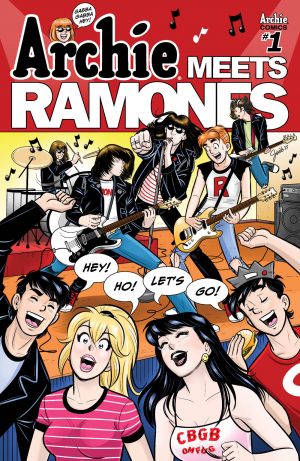 This book is a no brainer for me to get an A plus.

Over the past year, I have fell in love with the Archie line of books. They’re just awesome. I also love the Ramones. Put them both together and, well, I just go crazy.

When the Archies tank at the Riverdale High Battle of the Bands, a magical twist of fate sends them hurtling into the past—and face-to-face with none other than the Ramones!

Can the legendary punks get the Archies to realize their own rock ‘n’ roll potential and find their way home?

This book is pure gold.

Funny. Happy. I loved it. This is more than worth the price of admission. Pick it up. Or you may be heartless.